The Dallas Stars kicked off their post-All-Star break with a very convincing win last night over the Anaheim Ducks. As the season rolls along, each game takes on more intensity as the Stars will look to make the post season for the first time in three seasons. With that intensity comes the desire to be amongst those of your kind that live, eat, breathe Dallas Stars hockey. We'll get together to show our support for the team we all love and be around those die-hard fanatics called Stars fans.

At Frankie's in Lewisville, we'll have our own room for Stars hockey viewing pleasure. I've been guaranteed the best service available, and if you've never met the owner of the Frankie's franchise, you'll be happy to know he's a Stars fanatic: 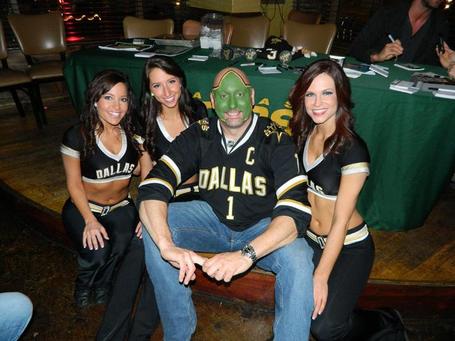 Come on out to Frankie's Sports Bar in Lewisville to watch the Dallas Stars take on the Phoenix Coyotes Saturday, February 18th! You can find maps to the location on this handy Google map. Several of the Defending Big D crew will be present for the night, and we'd love to meet you all. Lively discussion, debates, cheering and general good times to be had by all. Don't be shy!

Not close enough to you to make it? Let us know where you'd like the March watch party to be held in the comments.