Jeff Angus takes a look back at the year that was for the Dallas Stars.

Share All sharing options for: The Dallas Stars in 2012: A Year in Review, Part I

2012 was a year of change for the Dallas Stars. Tom Gaglardi assumed ownership of the organization at the end of 2011, and he started to put his fingerprints on operations soon after.

On the ice, the Stars once again faded down the stretch, falling short of the playoffs for the fourth consecutive season. Gaglardi promised change, and he delivered. Off the ice, he brought in some fresh blood (and a familiar face) to help get things back on track.

He left the on ice changes to the GM and coach, but you can bet he offered his input whenever necessary. Gaglardi gave a vote of confidence to Joe Nieuwendyk and Glen Gulutzan, and Nieuwendyk entered the offseason with the mandate to shake up the leadership group.

"We had a team that really ran rudderless for three years without an owner and as we saw, these things can fall in a hurry. It's pretty tough for a fan to get excited in an owner and the management when you're owned by a consortium of 45 banks. If you go back to the attendance as recently as 2007, we were still a very successful team. It fell in a hurry and it can come back in a hurry. We've got to make the right moves."

If I had to summarize 2012 in one word for the Dallas Stars, I would go with change. Even with the uncertainty that comes with a roster overhaul and a work stoppage, Dallas is building for the future. Their prospect group is deep and talented, and their core pieces are all locked up for the long term (with one looming exception). The lockout has tempered much of the optimism that the new regime had generated, unfortunately.

With all of that being said, a lot happened in 2012. Let's count down the top 10 most interesting stories.

Kari Lehtonen came to Dallas as a talented young goaltender with unrealized potential. In Atlanta, he had failed to live up to the immense hype that typically comes with a high draft selection. In Finland and during his first few years with Atlanta, Lehtonen was always able to get by on talent alone – he never needed to work hard off the ice.

That (lack of) work ethic got him into some trouble as his carrer progressed. His body would continue to break down each season, as he didn't have the fitness level necessary to fight off the wear and tear that comes with being a starting goaltender. After coming to Dallas, Lehtonen committed himself to improving his work ethic, and the on-ice results have reflected that.

He is now regarded as a top 10 goaltender around the league, and the Stars rewarded him with a massive contract extension a few months ago. It took Lehtonen a long time to figure out the "professional" part of being a professional hockey player. He has a strong relationship with Stars goaltending coach Mike Valley, and Valley has been a significant factor in Lehtonen’s improvement and maturity.

McKeen’s Director of Goaltender Scouting, Justin Goldman, shared these thoughts with the DefendingBigD readers on Lehtonen a few months ago:

He is progressive, and not just with the way he teaches technique, but how he motivates and inspires goalies to be their best. He knows what it takes to turn a Top-30 goalie into a Top-10 goalie without over-coaching them or changing their game. The best thing that possibly could've happened to Lehtonen was to cross paths with Valley, and you're just now starting to see the result of the great chemistry that has been created. I wouldn't be surprised if Lehtonen requested the Stars to extend Valley's contract before signing his own contract extension -- he's that valuable.

The Stars don’t have any franchise-calibre players coming up through the pipeline, but thanks to some solid drafts in recent years (2010 isn't looking great, though), they have a deep collection of talent in the farm system. Dallas has also been very shrewd with their free agent signings, scooping up players like Brenden Dillon and Matt Fraser for nothing. Dillon, in particular, looks ready for NHL duty. Not bad for a player who was passed over multiple times in the NHL Draft.

Stylistically, Dillon doesn’t really compare to any current Dallas defensemen. He is much bigger than Goligoski, Daley and Robidas, and he is much more mobile than Fistric or Pardy (the Stars would love it if he started to play with some of Fistric’s snarl). If Dillon does crack the roster this fall, expect him to start off in a depth role with a focus on defense. Young defensemen need to figure out their own end first (although there are exceptions). With good defensive play comes ice time, and with ice time comes offensive opportunities.

The Stars have tapped into the WHL over and over again, and their ties with the league run deep. It isn’t all rosy for Dallas prospects, though. Scott Glennie continues to struggle with the pro game, and his poor play is made exponentially worse when you consider that he was drafted 8th overall. Jack Campbell has struggled in Texas this season, but it is not out of the ordinary for a young goaltender to take his time to adjust to the pro game (look at Cory Schneider in Vancouver as an example).

Brett Ritchie, Matej Stransky, and Mike Winther are having great seasons in the CHL. Jamie Oleksiak seems to be getting better each game. Fraser has come on as of late, and Cody Eakin has been the most consistent player for Texas this season (although he probably isn’t a prospect at this point).

Dallas has struggled over the past four years because for many reasons, and one of them was a lack of depth. That won’t be a problem in the future with so many capable young players in the organization.

News of a new jersey and color scheme officially broke a few months ago after being rumored for some time. The Stars may want to fall in line with their Dallas contemporaries and change the teams colors to a red, white, and blue scheme, or they may revert back to the dark green that they were known for in the late 1990s and early 2000s. Whatever the case, the Stars are going to overhaul their logo and jersey.

I would personally like to see a return to the dark green - it is a beautiful color, and a unique one, as well. The best jerseys in pro sports are either the classic ones, or the ones with unique color schemes.

Option #1 looks generic and boring to me. I really like Option #2, though. I found these two mock-ups on the internet. 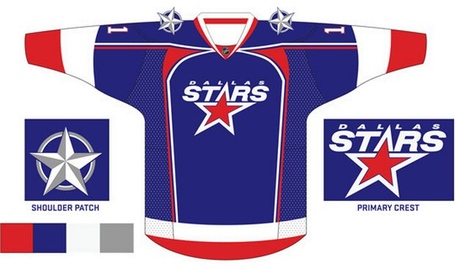 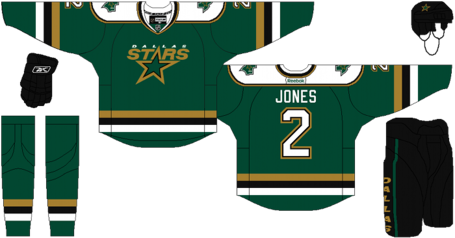 A lack of leadership could be another reason for the lack of success in Dallas over the past four seasons. That isn’t a criticism of the coaching staff or captain Brenden Morrow, but the team has crumbled down the stretch for three straight years, and that starts at the top. Jagr and Whitney are both past their respective primes, but their value to the Stars will be felt in more areas than just on the ice. Jagr is renowned for his incredible work ethic, and he had a great influence on Claude Giroux in Philadelphia last season.

Whitney is one of the most respected players in hockey. He has battled adversity his entire career as someone who was supposedly too slow and too weak to make it as an NHL player. Additionally, he will provide a huge boost to the Dallas power play, as he is one of the best pure playmakers in the game. He can still bury the puck, too.

And the signings also point to Dallas wanting to get back into the mix as a top NHL organization. Other players pay attention to signings and trades, and they will be watching closely to see how these two aging stars fare as Stars. Jagr only signed a one-year deal, and if the lockout drags on all year he may never pay a single game for the Stars.

Lites had tremendous success during his first tenure with the Dallas Stars. He is a well-respected voice in the business community, and his knowledge and passion for marketing and promoting sports (and hockey, in particular) is unrivalled. The Stars will need to lean on him more than ever with the lockout, as they struggle with irrelevancy in a market dominated by the Cowboys, Rangers, and Mavericks.

"When I first got here (in 1993), we had a blank canvas and we had a lot of new ideas, and we weren’t afraid to try anything," Lites said. "Over the years, you sort of decide `this is the way we do things,’ and you don’t really look at other ways. Well, now we have the chance to look at other ways, and I think we’re getting a little bit of that attitude back that we used to have. There are no bad ideas right now, we’re looking at everything."

Lites can’t do it alone, and he has built a very strong team around him - Jason Farris runs the business/finance side of the organization, and the team has made several other important hires as well. The lockout will hurt the Stars, but it also provides them with the opportunity to start with a blank slate. The club wasn’t making money under the old economic system. They have a solid core of players in place, and the Dallas area has proven in the past that it loves hockey.

Stay tuned for the top five Dallas Stars moments from 2012, which will be published in the coming days.

I have really enjoyed writing columns for DefendingBigD – the community here is knowledgeable and passionate, and that makes for great discussions. Let’s hope we have some hockey back soon. In the meantime, take care and have a safe and happy holidays!