Riding high on a newly determined starting goaltender and recovering special teams, the Texas Stars (6-6-0-1, 13 pts, #10 Western Conference) have climbed their way out of last place in the Conference.

Sitting just outside of playoff contention, the club owes a lot to Cristopher Nilstorp's on-going shutout streak, currently at 153:09.

"Nilstorp's been fantastic for us," said Stars forward Toby Petersen after Saturday's game. "It's nice to know if we make a mistake, he'll be back there to bail us out."

Not to be understated is the resurgence of the penalty kill. While still tied for last place in the league, Texas is clicking at 95% on their last twenty PKs. That only goes to understate how far down they were, hovering in the mid 60s in early November.

"I think there's more confidence in the [penalty killers], and we trust each other more," added Nilstorp.

The Stars just came off a solid win over the #1 team in the conference, the Charlotte Checkers (Carolina Hurricanes). Former Star Dan Ellis and Nilstorp battled to a 0-0 tie after 65, leading to a nine round shootout, win by Petersen. Things get no easier for Texas as the week wears on. The Oklahoma City Barons (Edmonton Oilers) make their first visit to the Cedar Park Center tonight, bringing three top-ten draft picks and three of the top seven scorers in the AHL. Their defense has been porous, however, placing them at sixth in the conference. The #2 Abbotsford Heat (Calgary Flames) visit on Friday, bringing the hottest goaltender in the league, Barry Brust (4-0 with a 0.25 GAA).

If Texas can earn a split of those upcoming games, that is a huge win and would show they are a serious contender in the Western Conference.

Here's a further breakdown of what's going on at each position.

Cristopher Nilstorp is your undisputed #1 in Cedar Park right now. He is likely to start every game until the three-in-three to start December. Jack Campbell will probably pick up one of those games as it is very uncommon that a goalie plays all three games in a row. To my knowledge, Jack Campbell is the only one to do it for the Stars, starting the last three games of the 2011-12 season for Texas on consecutive days.

It is certainly a little disconcerting for fans to see the Dallas Stars 2010 first-round draft pick spending his time as a backup instead of a starter in his rookie season. Ice time in games is key to development, surely. However, the Stars have a team full of prospects this year. At the current moment, their chances for winning are better with Nilstorp in net.

Campbell showed a very timid and not confident demeanor in his last start, against the Lake Erie Monsters (Colorado Avalanche). That is not typical of Campbell. However, I believe it would do more damage than good to swap him for Josh Robinson in the ECHL. Robinson was called up briefly over the past week and was sent down yesterday. His callup did coincide with improved goalie play, so perhaps the motivation goals of his callup were met.

Texas ran with six healthy defensemen over the past three games. Jordie Benn, who hit his head against the boards after a fight against Lake Erie on the 10th, was cleared to play in last Saturday's game but was held out just one more game. Additionally, Texas called up Hubert Labrie from Idaho yesterday. Thereby, the D corps has ballooned from six to eight. Indications are that Benn will jump into the lineup tonight against OKC, possibly taking a seat would be Tyler Sloan or Patrik Nemeth.

Nemeth has had some stumblings to start the season, taking ill-advised penalties at times but still coming out plus-2 so far on the season. Time in the press box to start November put his numbers on the upswing. Sometimes rookies just need some time to watch the game and absorb things from a birds-eye view.

When playing, Nemeth is often paired with Brenden Dillon. Lacking ice time and QualComp stats, Dillon appears to be getting tougher assignments this year, reflected in his somewhat lower numbers than expectations from the Dallas crowd. It's nothing to worry about, however.

Jamie Oleksiak is coming along on the defensive side. He is commonly paired with vet Tyler Sloan. When he wants to use his body, he is force. One fan described his hits as "turning the glass to Jello". He seems hesitant to use the size and plays like he is smaller than he is, at times. Comfort with the physical game will come with time though.

Currently holding fourteen forwards, Coach Desjardins has demonstrated a tendency to stick with what works once he's found a winning combination. Therefore, this has been the lineup for the last four games:

This leaves Mike Hedden and Taylor Vause in the press box.

Cody Eakin and Tomas Vincour look like they should be in the NHL. It's clear they're a step above the competition here. Eakin blocked a shot early in the last game, leaving for the second and third period. X-rays were negative. He is still the only star with a double-digit point total. The third man on that line, Reilly Smith, has had every break imaginable and has to be gripping the stick a bit hard. He had Dan Ellis beat in the first round of the shootout, only to kiss the crossbar harmlessly. He's aware of his struggle clearly, as he demonstrated in this tweet: 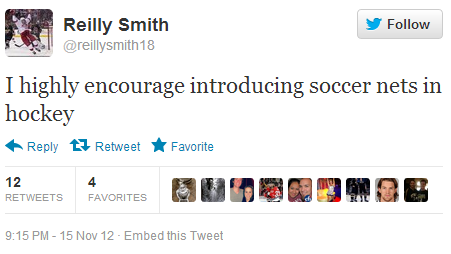 Alex Chiasson was out for several games with a stomach bug, and it's been slow going for him getting back into it. He has no points and is minus-1 in five games since returning. He only has one goal on the season. Veteran linemates Petersen and Francis Wathier should be able to generate points with the young winger, but something isn't quite clicking for the line at the moment. It remains a work in progress.

Matt Fraser finally turned on the spigot, scoring four goals in the last four games, three on the power play. Those goals were key to Texas's turn around. Travis Morin is his usual puck-distributing, point-generating self, continuing last year's chemistry with Fraser. Colton Sceviour, just back from injury, has three points in six games.

Finally, the fourth line seems to be set for now. Antoine Roussel has far better hands than his previous season's stat line would suggest. Scott Glennie has been effective in his fourth line role with 1-1-2 in five games played. Clearly he would like to be further up the lineup, but he has settled in nicely in his current role. He will have to continue to produce to generate a chance further up the lineup.

Luke Gazdic has had a mostly forgettable season so far. With just an assist to his name and a minus-4 rating, the fourth-year winger has even been scratched once on the season. At times last season, it appeared as though he would be a great option as a third line guy with scoring potential. That has been mostly invisible this season so far.

Casualties of the lockout are many. Mike Hedden and Taylor Vause are the Texas Stars' sacrificial lambs. There is no doubt both would be playing every night in a non-lockout season. Hedden (with Ryan Garbutt) was the breakout player of the year for Texas last season. Vause's minus-8 rating is eye-popping, but the optics aren't that bad. He has mostly played in Texas losses early in the season and hasn't benefitted from the recent upswing in play.

Finally, Austin Smith was in town for a few games this week but saw no playing time. Smith drove back to Boise yesterday, instead of flying, implying that he will be staying in the Gem State for a while yet.