Does anyone legitimately care who is right or wrong in the lockout?

Share All sharing options for: 2012 NHL Lockout: When Mommy And Daddy Fight

Remember when your parents would fight growing up? It would always create tension, even for an uninvolved kid. If the problems were severe enough that unfair pressure to choose a side would inevitably creep up for a kid watching the fight unfold. What is a kid watching his parents fight supposed to do?

He loves them both because he loves his family. All the kid wants is for his family to stay in tact with the conflict resolved. The kid observing the fight doesn't care if his mom or dad are in the right. He only wants to see a compromise that allows the family to continue moving forward.

I feel like the little kid in this scenario when I try to follow the lockout. The NHL is an industry that doesn't exist without fans, owners, and players working in unison. As supporters of the industry we're insignificant kids watching our parents fight while we wait patiently for them figure things out and return to a state of harmony. We know the state of harmony will return at some point since divorce isn't an option, but waiting for it to return is difficult.

I don't mind waiting for an agreement in theory. They don't owe it to me to go to work on a daily basis. I give them my money knowing all too well that this is the industry that made me go through my freshman year of college without any hockey to watch. I also know that when this lockout is over I will continue to give them my money because I love the sport. I love hockey, and some childish unnecessary in-fighting isn't going to change that.

Even if it cancels a second season.

Does that make me or anyone that feels similarly stupid, though? Andre Richelieu, international brand management expert and professor at Laval University, thinks the NHL is treating fans like they're stupid. He shared a lot of thoughts in this piece posted on The Globe and Mail website. He describes what he perceives to be the message from the NHL:

"The message the NHL has sent is that ‘we are stupid,’" he says. The NHL cannot possibly have any other opinion, he says, because the league has previous proof – two earlier lockouts – that the league can treat its fans in a cavalier way and they will always come back.

"That is the calculation they make," Richelieu says. "When they say ‘We have the best fans in the world’ the presumption is that the fans will come back. That is the best example of insult and marketing myopia I know.

Is that stupidity or fierce loyalty to the product? The line of demarcation is blurry at best, but a clear unemotional recognition of the situation doesn't make fans who will come back immediately stupid.

The NHL, likewise, doesn't think we're stupid. Both sides of the labor dispute remember how quickly revenue growth came back after the last lockout. They know fans will come back not because they're stupid, but because they want to watch hockey. At this point, the only people that I think are treating me like I'm stupid are the vast majority of sports writers and pundits stumping for whatever sides they are taking.

Take the previously referenced article for a moment. Among Richelieu's quotes are numerous references to the undeniable fact that fans will not come back if they lose another season. Among them:

"Both sides showed that they didn’t care about the fans, and that’s the worst part of it. Fans feel betrayed. And because the trust is broken, there is a distance now between the fans and the league, the fans and the teams. How are you going to bridge this gap?

"I strongly believe that, even in Canada, the fans will not come as strongly back as they did after the last lockout, and they will not come back in the same state of mind. They will know, in the back of their heads, that they can be cheated and betrayed by the league – and it seven years it may very well start again.

"So why should I commit that much toward a product, a team, a league that doesn’t care about me and will take me hostage again in seven years."

He brings up some good points, but the ultimate conclusion he draws has little supporting proof.

The NHL will have to bridge a gap between the fans at large. This is undeniably true. Some, like Eugene Melnyk in Ottawa, have already begun to publicly formulate how to do so. (Owners, if you're listening, I'd take a years worth of access to NHL Center Ice and call us even.)

The final sentiment of the passage is a legitimate train of thought that all fans will have to confront at some point. "If the league doesn't care about me, then why should I care about it?" I am under no illusions that Jamie Benn personally cares about me, and I don't think the owners care about me other than convincing me that I need to spend my money on their product. Some less robotic people will need to deal with this slight though.

However, it takes quite a leap of faith to come to the conclusion that fans will stay away. The truth is that we don't know. They might, but at present there is little proof to suggest that will be the case. The most concrete situation we can look back on is the loss of the 2004-05 season, and fans came back in droves. The circumstances are different now so it isn't a one to one correlation, but there is ample reason to believe fans will come back in short order after the lockout ends.

Opinions like these are being thrown around all too often with precious little basis in fact, and it has worked to shape opinions about the lockout. These opinions run the full spectrum from "Gary Bettman is the antichrist" to "the players are greedy, get over it and play". Few have taken the position that both sides are vindictively screwing the other, and those that do are routinely shouted down by those openly pushing an agenda.

If anything has pushed me away from hockey over the past two months it's the over the top stumping for either side of the lockout as if I should care one way or the other who is wrong. Allan Walsh has probably been the worst about it. He doesn't hide what he's doing:

But that doesn't make it any less annoying, condescending, or dense. Here is a sample: 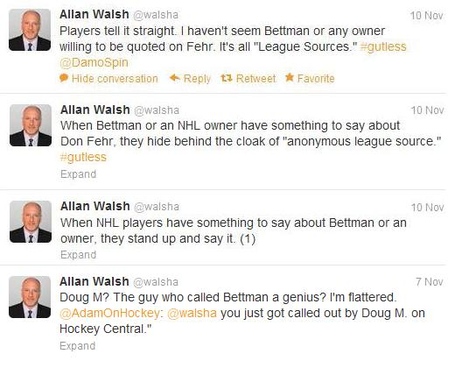 Walsh and other opinion makers are missing the point. The fact that Walsh is missing the point so badly is a little surprising, but he is nonetheless. The hockey industry doesn't exist without the players, the owners, and the fans. Stirring up anger to be directed at either side is pointless (outside of filling up column space).

I've reached the breaking point. I miss hockey. I miss being able to read about hockey. I look forward to the day when hockey is again played on the biggest stage in North America to a chorus of boos. I've reached the point where I'm so tired of the fighting, the finger-pointing, and the name calling that I just want an agreement to be reached so I don't have to listen to this garbage anymore.

I feel like I'm a little kid again watching my parents fight, but with uncles and aunts from both sides of my family trying to convince me that their in-law is an idiot. It's incredibly grating.

The sad reality is that I don't care if both sides are idiots. I just want the idiots to function well enough to provide me with what I need: hockey.