Are Young Coaches Really A Problem?

Ray Whitney is apparently going to get Glen Gulutzan fired because he didn't learn to work well with his peers as an adolescent.

Share All sharing options for: Are Young Coaches Really A Problem?

At least, that's what I've been led to believe by this collection of 300 plus words that can loosely be defined as a coherent stream of thought. My goal isn't to embarrass an author so I'm neither going to mention his name or the site where the post is published. The content of the post made the hamster in my brain run back to the wheel, and got me to consider what passes for content.

The post meanders toward the idea suggested by the title almost halfway through. The idea being considered is " Why Glen Gulutzan Will Be The 1st Coach Fired During the 2012-13 NHL Season". You could make a decent case that he will be the first coach fired if you wanted to go down that route. The Stars defense was poor last year. The powerplay was nonexistent. At times it seemed like no one was in control of anything. These would all be perfectly valid points.

Unfortunately, none of these points are made.

The Stars signed Jaromir Jagr and Ray Whitney in the offseason. Both players are 40 year(sic) old; that's one year younger than the head coach.

Gulutzan was a longtime minor league coach before he made the jump to the Stars. He may find it quite difficult to get his message across to Jagr, who has shown he likes to march to his own drummer.

Whitney has also been at it a long time and will find it difficult to adjust to a young coach.

You really have to take some time to consider these statements before the full weight behind them sets in.

Glen Gulutzan's head "could" be on the chopping block because of the signings of Ray Whitney and Jaromir Jagr because....they're old? The Stars signed Jagr and Whitney to provide veteran scoring depth to a team desperately in need of veteran scoring depth. It's easy to bag on Jagr as a coach killer, but it's equally easy to go right to Google and find numerous stories talking favorably about Jagr in the locker room.

Ray Whitney's inclusion in the story is simply strange. The author speaks as if he has some information no one else has. Ray Whitney WILL have a tough time adjusting to a young coach. Why? What in his history suggests that he is going to have a problem with authority. When you Google "Ray Whitney uncoachable" these are your results: 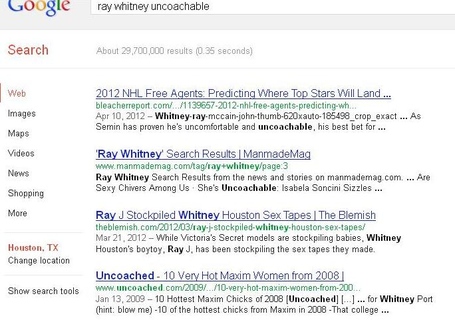 Another problem with this thesis is the idea young coaches cause some extra level of anxiety or tension with veteran players. I took about five minutes to find the Wikipedia page listing all current NHL coaches. I went through each page and found how old current NHL coaches were when they initially were hired as a head coach. These are a few samples:

These ages aren't 100% exact, but they're at most a year off depending on their actual date of birth. 21 current head coaches began their careers at age 43 or below (including the unlisted Gulutzan). 19 were 41 or younger. Ten began in their 30's. You may notice something else about this list: that is a ridiculously successful group of coaches.

If anything, I would take the alternative view. For a younger coach to take a head coaching job away from a more experienced candidate something about his credentials must really stand out. Perhaps he's an excellent tactician. Maybe he is a teacher who can help develop young players. The coach in question could command authority or just generally have a high intelligence level. The point is that i don't think it's a coincidence that the younger coaches on this list have found numerous jobs or had significant longevity.

I don't see why you would even invoke age unless you have nothing else to write. My direct superior is a year older than I am. We are able to work cooperatively to accomplish our tasks. Those of us that write in this space are all in the same peer group yet we're able to work cooperatively with few issues. Why, then, are we assuming that hockey players are unable to do so and publishing it on a heavily trafficked site?

Publishing pieces like this accomplishes two things. It creates page views (I assume) and damages your credibility. Speculating about the future of Glen Gulutzan could be done easily as I laid out above, and it could be done about any coach in any sport. Adding no substance whatsoever (aside from baseless speculation) to your point drives readers away by making sure that no one will consider your site as a legitimate news source.

Then again, if credibility isn't your goal I suppose it doesn't really matter.