Last week after the win over Nashville, we wrote about how Gulutzan's changes to the line combinations seemed to spark one of the more solid performances by the Stars this season against a solid Predators team. It was a subtle move, sliding Eriksson to play next to Ribeiro on the right wing and moving Ott up to the top line, but it in two games is has created one heck of a dangerous combination of scoring and defense on the top two lines.

It's just two games, but the Stars have outscored their opponents 8-2 and Loui Eriksson and Jamie Benn -- enjoying a bit of a rollercoaster season -- have apparently come completely out of their shell and are breaking out offensively once more. The duo, ironically gaining national attention after being named the most underrated players in the NHL, have been on a roll since the New Year; it's the way that Gulutzan has found a method of spreading that offense around that has been impressive.

Against Boston and Detroit, the Dallas Stars scored eight goals total. Jamie Benn, Michael Ryder or Loui Eriksson were involved in seven of those goals, with the second line of Steve Ott, Mike Ribeiro and Brenden Morrow going scoreless in the two games. Since the line switchup occurred, the Stars have scored eight more goals but have been much stronger defensively -- more importantly, the scoring has now been more balanced across the top two lines as Ribeiro has suddenly found the back of the net in spectacular fashion.

"One game we were playing super well, and not giving the other team much and the next game, we got away from it," said Ribeiro. "It's playing well defensively, when you do that, it helps offensively - you create turnovers and it's been a focus. Pass the puck hard, finish your checks, but just outwork the other teams."

While many are focusing on the big numbers since the switch -- Ribeiro's four goals, Morrow is plus-5, Benn and Eriksson combined for nine points -- it's the way the Stars have been much stronger defensively that's really been most impressive.

"Just putting in the effort and playing the right way," said Benn. "It's what's going to win hockey games, and we're doing that right now. I think, for our team, we just want to put some wins together here and kind of get streaky."

We've been talking most of this season about how the Stars could find better offensive balance, especially since it there never seemed to be two lines getting hot at one time. When Benn and Eriksson went into a lengthy slump in November and Brenden Morrow was hurting, the third line picked things up with the help of Eric Nystrom. Since then, the Stars have either had Ribeiro and Morrow leading the scoring charge or it's been the Eriksson and Benn line -- never at the same time.

There was a lot of talk about putting Steve Ott back on the top line with Benn and Eriksson, to help free up Benn offensively and to avoid separating the two most dangerous players on the team. The problem with that scenario, as pointed out by many, was that by putting Ryder back on the second line the Stars would be compromised defensively once more and while the goal scoring has slumped at times it's been the team defense that has been most inconsistent this season.

So, Glen Gulutzan thought of a better plan: split up Eriksson and Benn and spread around the offensive ability. By putting Eriksson on the second line, it's seemed to free up Ribeiro creatively, who now has two highlight goals in two games since the switch.

Eriksson is a strong, strong defensive player and is gaining ground on a bid for the Selke as one of the better defensive forwards in the game. He's extremely smart with the puck, rarely commits a penalty and more than anything he's a puck possession machine.

The problem that had plagued the Ribeiro line this season were turnovers that forced them to play in the defensive zone more than they are capable; having Eriksson on his wing not only allows Ribeiro to create more offense, it makes that line much stronger defensively.

"Loui does everything right on the ice," Ribeiro said, when asked what it meant to have Eriksson back on his wing after the win against Edmonton. "He's a guy that's patient with the puck, too. He's a guy that's not going to throw the body, he's going to protect the puck, he's going to wait for a guy to get close. I think my first goal, he had three guys on him then he curled back and opened things up for me."

Eriksson doesn't have a goal in the two games since the switch, but his five assists in those games proves he's much more than a goal-scorer. Eriksson, who has the ability to flirt with 40 goals a season, is an underrated playmaker and seems to feed off Ribeiro perfectly.

"He's a really smart guy and a complete player, plays well on both sides of the puck," Ribeiro continued. "He's one of the top forwards in this league, I think -- not just offensively but as an overall player. He's been showing that since he came into the league."

The details of why the change has worked has been interesting. The initial thought was that Ribeiro is a playmaker and Eriksson is one of the great finishers in the NHL, so obviously it's going to mean more goals for Eriksson, right? Instead, we've seen a revitalized Ribeiro get four goals in two games and play much more freely offensively, as Eriksson continues to create chances with his smart play.

It's been interesting to see how the combination changes have sparked not only Ribeiro and Eriksson, but Jamie Benn as well. Benn had already been enjoying a tremendous week offensively but with Ott on his wing, his game has changed a bit. He was the best player on the ice against both Nashville and Edmonton and was a beast defensively as well, something that didn't escape his head coach. 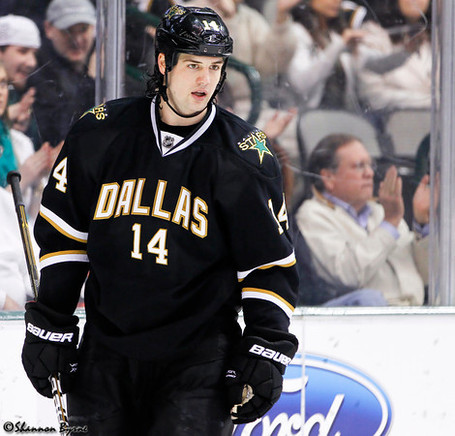 "Real good night for Bennie, our best guy up front there," said Gulutzan, talking after the win against the Oilers. "Double-shifting him in the third there, it just paid dividends, the more you play him, the better he gets. I thought he was really strong tonight, in all aspects of his game tonight, not just the two goals - he was physical, he played well at both ends, it was fun to watch for all of us."

Benn said after the game that he enjoys having Ott on his wing as he feels they compliment each other well, and Ott is someone that Benn has enjoyed great success with in the past. In fact, the Stars began the season with Ott playing with Benn and Eriksson until the defensive breakdowns of the second line forced some needed changes.

"We started the year together and I think we feed off each other. He's pretty gritty and I think he brings out the physical play in me and I try to bring out the skill set in him," said Benn.

To be fair, the Stars enjoyed a big win on Saturday against a team that is struggling mightily defensively. Yet they've scored 16 goals the past four games, three against teams normally thought to be exceptionally strong defensively and in goal. Perhaps the Stars are finding some good balance on offense yet at the same time, and most importantly, they're finding good defensive balance as well.