Dallas Stars Almost There, Still Not Quite Enough

Share All sharing options for: Dallas Stars Almost There, Still Not Quite Enough

After an 11-3-0 start to the season the Stars are 10-13-1 the past two months. The great start has provided this team with a cushion to work with as they have fought to get past some key injuries and inconsistent play. The fact that the rest of the Pacific division has struggled this season - the Stars are just two points behind Los Angeles - has also been a big boost for the Stars, who are focused on making the postseason for the first time in three years.

On Tuesday night, in front of an enthusiastic crowd of 15,000, the Stars played what on the surface was an entertaining game in what reality was an odd, crazy hockey affair that many would just as soon forget. Afterwards, we were left once again to talk about how the Stars played well, but some bad bounces and poor defensive coverage cost them and everything will be fine next game when they get a key player back from injury.

The Stars have secured just six out of their last possible 16 points, winning just three of the last eight games and haven't won more than three games in a row since the middle of December. The Stars can not afford to continue to trade wins and losses and at some point must find consistency from game to game if they indeed hope to make the postseason.

While the excuses have been many, and some legitimate, coach Gulutzan and his team need to find a way to overcome the injuries and work past being "almost there" and be good enough to win on a consistent basis.

What's frustrating the most is that the Stars are capable of doing just that. While the defensive issues are certainly this team's biggest weakness, and injuries are creating some very odd defensive pairing and minute allotments, the Stars have shown that for the most part it's allowing teams to take advantage of costly mistakes that is the difference on most nights.

"We just made too many mistakes," coach Glen Gulutzan said. "Our guys were backing off the line too much and we had some lazy mistakes. If you're going to be lazy, it's going to cost you."

While the defensive coverage this season has been more consistent times, too often over the past month has this been mentioned or talked about. Allowing four goals per game in the past eight games certainly does nothing to harbor good feelings about the defensive abilities of this team headed into the crucial second half of the season.

Yet the Stars, certain when healthy, have the ability to have better defensive balance and structure -- it's just a matter of showing it consistently. 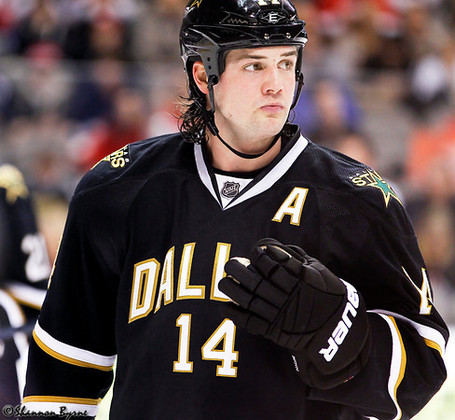 This is a team that is certainly capable of making the postseason, but changes must be made in the defensive structure on the blue line for that to happen.

While injuries have necessitated playing certain players outside their comfort zone, Gulutzan and Nieuwendyk must bite the bullet and make the decision that there are players that simply are costing this team too much at key points in the game and the current defensive minute allotments aren't doing them any favors.

The Stars are good enough to play competitively with some of the better teams in the NHL, but they have yet to show the consistency to win regularly against them.

Against the Red Wings, the Stars actually played a very good game against the best team in the West. They committed zero penalties, maintained their discipline and put a lot of pressure against Detroit, rallying from two-goal deficits on four separate occasions and nearly tying the game in the final minutes. Yet the Stars made several costly mistakes, especially in the first period, that gave the Red Wings all the room they needed to take control of the game.

"I just thought we made a couple of lazy mistakes and we made a couple structural mistakes that we shouldn't make," Gulutzan said. "They're the team that can make you pay pretty quickly as you see. I thought our compete level was up but you can't make mistakes like that against this club."

The Stars, overall, played about as well as could be expected against the Red Wings and took advantage of an off night by Jimmy Howard in net. Jamie Benn, along with Loui Eriksson and Michael Ryder, had a particularly incredible night. Benn was the best player on the ice and after a disturbing slump in November, seems to have gotten much of his confidence and swagger back - throwing big hits, making defensive plays and once again playing great offensive hockey.

Unfortunately, the Stars once again failed to get their top two lines firing on the same night and in a game when the third line was treated like a pylon and finished minus-3, not having the Ribeiro and Morrow line contribute certainly hurt this team tremendously.

"Leaving guys open in the slot, they got one off a skate, they got a couple of bounces...but they were in good scoring positions and our coverage wasn't great. We had one good line, the Benn line was directing a lot of pucks at the net and they were going in, and we just didn't get the secondary scoring that they did.''

The lack of secondary scoring by the Stars was certainly the difference, as well as multiple defensive breakdowns at key points of the game. While the Stars were able to cut down several two-goal leads by the Red Wings, allowing heartbreaking goals to give that lead right back was extremely costly. 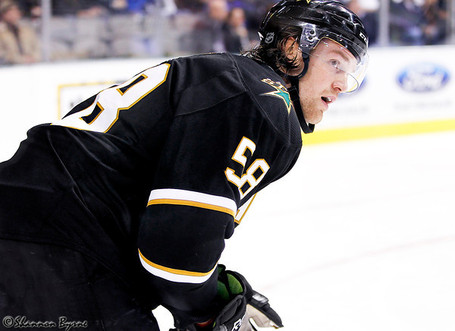 It was great to see, once again, the Stars have the resolve to fight back and maintain their energy level yet at some point the Stars will have to find a way to consistently get past talking about being happy with their compete level and start talking about wins followed by another win.

Despite the frustrations of another costly loss -- and it was a loss to the best team in the West, to be fair -- there were some bright spots. Jamie Benn now has 13 points in his past nine games and his brother Jordie got an assist in his first NHL game. The elder Benn acquitted himself well in his NHL debut, playing significant minutes and showing great resolve and composure while also chipping in offensively.

"Obviously, they have some unbelievable hockey players, but my brother said it's just another hockey game, don't think about and just go out and play," Jordie Benn said. "That was a blast, a dream come true. Obviously, you want to win, but I got to play in the NHL with my brother, so that was awesome."