Share All sharing options for: Dallas Stars Need Home Ice To Be Bigger Advantage Down The Stretch 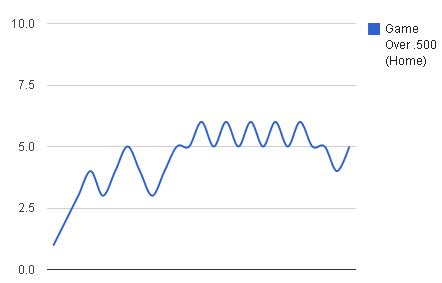 The Dallas Stars have a steep mountain to climb if they're to get into the tournament this season after a three year absence, and they know it.

"We've had meeting after meeting about what it's going to take and what you are willing to give," said Brenden Morrow yesterday after practice.

"We feel like we're up to the challenge. We need to be playing at a rate of four or five (wins) out of seven, so that's what we need to do."

The Stars play 18 of their remaining 34 games on the road, and to accomplish their goal and survive this rigorous schedule they're going to need home ice to be a safe, productive place.

Pictures always being worth more than my belabored prose, I graphed the Stars year at home this season to illustrate it's "running in place" nature thus far. Since their 7-6 overtime win over the Colorado Avalanche on November 4th the Stars have not used their home ice to gain any ground.

Dallas hasn't carved out much of an identity for themselves yet this season. They don't do any one single thing particularly well. Yet they'll need something to hang their hats on as the playoff push gets under way. Though the team embarks for a quick two game road trip today, the simple idea of home ice advantage seems like a good place to start (along with fixing the power play?) looking for potential advantages down the stretch, but the American Airlines Center hasn't been so kind to the Stars down the stretch in recent years...

And you thought it was going to be about attendance when you saw the headline, didn't you? Continued after the jump...

Here's what the Stars have done at home over the course of the last four years. Note the sharp downturn ever year around this time...

The line of demarcation here wasn't necessarily the All-Star break, but it was 24, 25, or 26 games in each case as it turned out, and I didn't even start looking for a certain point in the season or a certain number of games. If you scan the home game log for each of these years you're drawn very easily and naturally to this imaginary line in the sand where things just start to go south, and it happens ever year.

The Stars have frequently had a big home stand in February or March to look forward to in recent years, but it rarely works out the way everyone draws it up. A six-gamer in 2010 ended up 2-2-2. The seven-gamer last season wound up 2-2-3. They had 10 of 12 at home in 2009, badly needing a push, and finished those 4-6-0. This season there's more balance to the schedule and no lengthy home stand, only a four-gamer in March against the Coyotes, Canucks, Flames and Chicago. Salty.

Even in 2008 on their way to the Western Conference Finals they had an overall record in March of 2-7-2 and finished their last eight home games 2-6-0.

Is it necessarily home ice specific? No. The Stars have faded down the stretch uniformly in each of the last three seasons, and Joe Nieuwendyk said last off-season that he felt he addressed that by adding depth to the roster. Here's their chance to prove them right home or away, but the American Airlines Center must become a tough place for opponents to get points.

The Flames play 19 of their final 32 at home, and the Saddledome is a tough place to play. The Predators are notoriously good in their building. The Red Wings just won a franchise record number of consecutive home games. Chicago is 19-6-4 at the Madhouse.

A team's home building must be a fortress.

That's another issue entirely, but the Stars can actually help themselves out in more ways than one by finishing strong at home for the first time in a long time.

The Stars' remaining 16 home games this year include Vancouver, Vancouver, San Jose, San Jose, Los Angeles, Pittsburgh, Phoenix, Phoenix, Chicago, Nashville and St. Louis. Those are tough. Those are all real tough, and they're not even the most important ones: Two with Minnesota and two with Calgary.

Lucky for us this is the one area where we can help the team out a little. So I'll see you at the AAC on Saturday. Right?