What Is The Stars Powerplay Doing Right, And What Can They Improve?

Share All sharing options for: What Is The Stars Powerplay Doing Right, And What Can They Improve?

The Stars power play has struggled this season. They currently sit 25th in the NHL in power play percentage. Compounding the issues are the dual holes in the lineup caused by the injuries to Jamie Benn and Mike Ribeiro. Before the injuries several factors had been cited as major contributors to the Stars' power play woes.

The Stars take too many penalties, which, inevitably means that they will take some penalties on the power play with Sheldon Souray, Brenden Morrow, and Steve Ott taking regular power play shifts. They stand still too often with the extra man instead of working to find open ice without the puck. They're now missing both Benn and Ribeiro. Glen Gulutzan, though, referenced one issue in particular on Thursday that unexpectedly grabbed my attention:

"I think sometimes everyone gets so results based – and it is results based business – however results just don’t always turn on a dime," said Stars coach Glen Gulutzan. "Our power play has created chances. We’ve had guys at the net, we’ve hit posts and they just haven’t gone in. "

This quote struck me on a couple levels. First, he's absolutely right that power plays are measured in terms of results instead of the process the team goes through to create the results. The same criteria, results, is ultimately used in any profession. And, ultimately, when evaluating an organization as a whole it's necessary for the results to be present otherwise watching sports in particular is a pointless waste of time.

However, the process could still suggest that a given team should be getting different results than they are at any given moment. The St. Louis Blues and Minnesota Wild are perfect examples. Once luck dragons took over they appropriately switched places in the standings. The driving factor being scoring goals is shots (which are driven by scoring chances and Corsi). Shooting percentage and save percentage, over time, have been proven to almost always regress to the mean over time. Some dynasties excluded.

Shots continuously drive scoring. They are the statistical representation of the "process" a team goes about to generate offense. If the Stars process is truly working then the Stars should be generating copious shots with the extra man. Below are the Stars season by season power play shot totals. I used the available five seasons worth of data (so 150 team seasons with 30 teams each playing in the five seasons). PP S/60 is power play shots per 60 minutes. Rank is where the PP S/60 ranks among the 150 team seasons included, and PP% is the power play percentage in that given season.

The past two years under Marc Crawford were fruitful for the power play. The Stars, and Brad Richards in particular, kept the puck moving towards the net. The table above shows that the Stars are currently taking 41.8 shots per 60 minutes of power play time. The league average in 2012 is about 49 shots per 60 minutes. So if the Stars played a full game on the power play they would take about 7-8 shots less than the average team. This might seem like a small total, but consider that the average shooting percentage is in the 11 to 12 range. 12% is one out of every eight shots. Losing eight shots over the course of 60 minutes means we would expect them to score one less goal per 60 minutes. The moral of the story: shoot the puck. 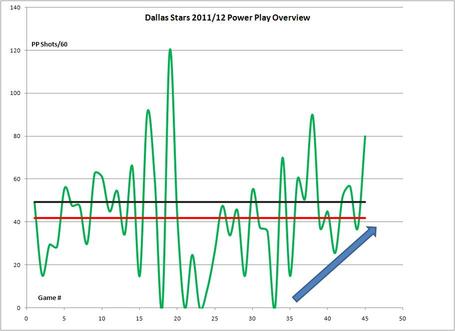 Two things stick out about this graph. The first is the chaos around the 20 game mark. The second thing that sticks out is that over the last 10 games the Stars power play "process" is definitely trending up. A simple definition of an up trend is higher highs and lower lows. The highs in this particular trend are above average, but the highs have been all season. The problem has been the crippling lows that dragged the average down. Gulutzan was right. The Stars are more consistently doing the things they need to do to score goals with the extra man, but the goals aren't going in right now. It could be a momentary irregularity, but it does look like they're trending up.

The power play trending up doesn't mean that they can't improve more. The Stars could make a few changes that would increase the shot totals for the power play units. If they utilize their personnel differently they have the opportunity to significantly increase the amount of shots they take with the extra man, and, ultimately, increase their power play goal output.

What I've done below is made a table that shows each Stars players total shots per 60 minutes in all manpower situations to show which players generate the most offense. I've included each players Corsi Relative Quality of Competition to show how relatively easy their ice time is. In the final column I've included where each player ranks in powerplay ice time on the Stars. I broke it down between forwards and defensemen. The first group is the forwards.

Toby Petersen and Tom Wandell sit in two of the top three spots, but notice the Quality of Competition. It's very low, and as we've discussed several times Gulutzan protects his fourth line so these guys get favorable zone starts compared to the rest of their Stars teammates. The guys to focus in on are Benn, Michael Ryder, Eric Nystrom, and Loui Eriksson. The four Stars forwards leading in shots/60 (with respectable Quality of Competition) are 5th, 3rd, 12th, and 4th among Stars forwards in power play ice time per game. The two forwards leading the Stars in power play ice time per game, Morrow and Ribeiro, are 10th and 11th in shots/60.

The Stars power play hasn't been good all year, but giving Benn and Eriksson so little power play time relative to Ribeiro and Morrow is putting an artificial restrictor plate on the potential of the power play to generate offense. Gulutzan mentioned process in his quote from Thursday, but the way he's utilizing his forwards on the power play is making him miss the message the process has been trying to deliver to him all season. Benn and Eriksson are the Stars top two offensive players. They, by a mile, generate more scoring chances and shots than anyone else on the team. They're the Stars top two players, and limiting their prime offensive ice time is holding the Stars back. Morrow and Ribeiro are on the next tier of offensive players for the Stars, but giving them copious ice time at the expense of Benn and Eriksson is hurting the Stars.

The defensemen really aren't that bad. The Stars top four shot generators from the blue line lead the Stars defense corps in power play ice time. The interesting part of the defenseman list is Philip Larsen having more shots per 60 minutes than Stephane Robidas. It's a small sample, but so far in his career he gets the puck to the net. I still don't believe that he's fully ready for NHL duty, but he does have the right idea about where the puck needs to go.

The above chart is a list of the 13 worst power plays over the past five years at generating shots. Included is a simple winning percentage for each team. I just found the percentage of games each team won, and ignored overtime rules. The average winning percentage of the bottom 13 teams in power play shot generation over the past five years is .465. A .465 winning percentage is equivalent to about 38 wins in a season. 38 wins a season will usually put you in the bottom 11-12 teams in the NHL. The 2012 Devils and Rangers stick out on the list, but we're only halfway through the season. The fact that we're only halfway through the season is also a positive for the Stars. They can, and need to fix this as soon as possible if they want to see late April hockey. Hopefully they can before it's too late.