If there's one thing I've learned from talking to Dallas Stars fans since Reebok got the NHL uniform contract and came out with the "Edge Uniform System," it's that most fans generally don't much care for the current sweaters worn by our team. Admittedly, the player t-shirts are pretty slick and I own a few of them, but the design seems to translate better to a black tshirt than it does to a hockey uniform.

Most fans were upset to learn that Reebok and the Stars claimed that the previous "Star-shaped" template would not fit onto the new "Edge" uniform cut, meaning that the uniforms worn to skate the Cup around Marine Midland Arena were no longer viable options... but does that mean we have to get radical?

I've asked Stars fans, and the community here at Defending Big D, what they'd like to see in a Dallas Stars uniform design. The answers are simple. Green. Our primary logo on the chest. Traditional striping. Stars fans hate the all-gold helmet sticker from a few years ago, and they don't love the black/gold/white concept of the home jersey as a whole.

With that in mind, I came up with four different uniform designs for our Dallas Stars. Using your feedback, I plan to narrow those 4 into 2 designs, fine-tune the designs to the specifications of the community, and see if we can come up with a consensus on a single uniform set, together.

Who knows, considering the Ottawa Senators recently unveiled a fan-designed alternate sweater that was backed by their fan base, maybe we can hope for a little Gaglardi magic, and see these on the ice some day? 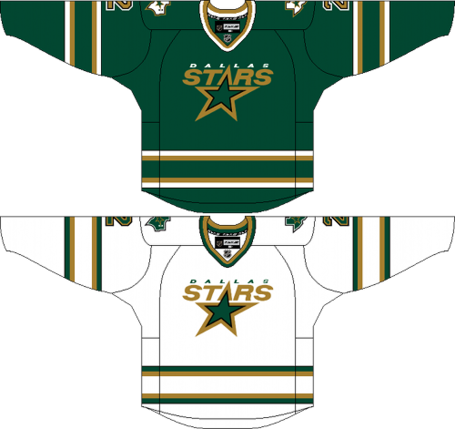 Based on the current home and road template worn by the Dallas Stars, this aims to "fix" what is broken with it without throwing the baby out with the bath water. Straightens up the arm stripes, adds real waist stripes, returns the primary logo to the chest, and returns green as our primary color. A modified collar shape that isn't worn by any NHL team currently, but would evoke the more standardized U neck collars of hockey sweaters past, while retaining the ever prevalent "RBK Triangle" in the middle. 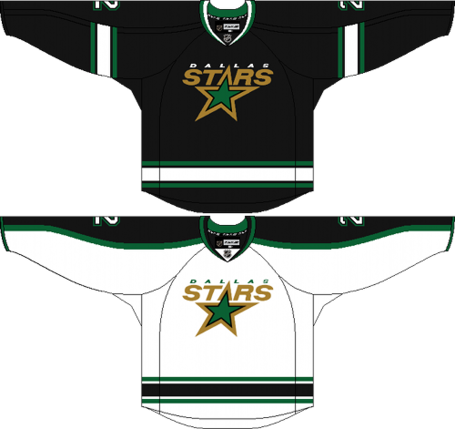 While not primarily green, these uniforms are the RBK Edge equivalent of one of the most popular looks in Stars history. The original Dallas Stars uniforms, with a few alterations to make them fit the Reebok cut. I used a slightly lighter shade of green, so it wouldn't get lost in the black like the originals. Wouldn't Kari Lehtonen look great stopping pucks in the same sweater that Andy Moog wore? I think so. 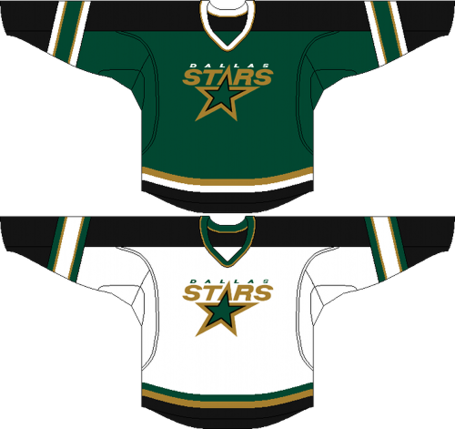 Sort of a modern take on the original Dallas Stars sweaters, only with a green home jersey and some added flair on the sleeves. Waist stripes that follow the hemline, so you don't get that annoying diaper look that most Reebok sweaters end up with. Actually fit in all team colors, instead of randomly throwing one of them aside, like the Stars seem to enjoy doing. 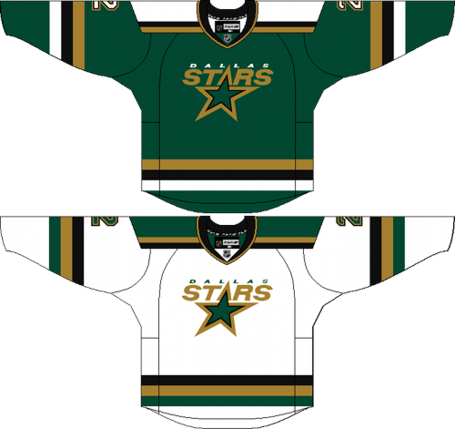 I went into this project with Option One as my clear cut favorite, but by the time I posted it, this won me over. I'm still torn on which one I like better, but this takes the traditional Minnesota North Stars pattern and makes it our own. I used the darker shade of green that they've used in Texas, made a white sweater that matches the green, and sharpened the edges of the shoulder yokes, to make them fit the angular nature of the crest. A modern classic that we could easily reclaim as our own.

Now, the rest is up to you. Which of these four designs would you like to see the Stars wearing, if it were up to you? Leave your comments below, and I'll use your feedback to further tweak the winning concept until it's perfect and loved by all.