The Dallas Stars Casino Night is the premiere fundraising event of the season for the Dallas Stars Foundation, raising money for many of the charitable initiatives the team supports. It's a night where fans dress to impress and see Stars players, coaches and staff in a fun and entertaining environment.

As guests arrived at Park Place Mercedes-Benz Grapevine, they walked the red carpet where your photo is taken in front of a sponsored backdrop (much like awards shows and parties celebrities go to.) Upon entering the dealership, you were greeted by the Dallas Stars Ice Girls and checked in to get your bidder number and your casino money.

The Stars had a silent auction set up, with many fantastic prizes available to be bid on. Not only were there signed jerseys from all members of the Stars team, there were also signed sticks from several players, getaway packages for a trip to New York to see an Islanders game or a "staycation" at Hotel ZaZa in Dallas. Different experiences were available to be bid on by guests attending, and the best part is all money raised goes to charity. So you get to do something for yourself and for charity all in one convenient place!

More on the Casino Night experience after the jump.

If you got hungry, there were tables set up in the dealerships' show room with catering provided by III Forks. They had waiters and waitresses with appetizer trays floating around all night with bites of prime rib and yummy desserts. There were also three bars positioned throughout the space offering up Jack Daniels Honey cocktails and cosmopolitans and other beverages of choice.

You then move on to the casino section, where you can find blackjack tables, a roulette wheel, two craps tables, Texas hold'em and other casino games. At each table, Dallas Stars players and coaches rotate out through the evening as guest dealers. Coach Glen Gulutzan was assigned to table 12 to start the evening, to deal blackjack. There was no one at his table, so I suggested that we go over there and I'd sit down and play. He sat next to me and we played a few hands of blackjack before he got up to do the dealing. He said he felt bad for taking people's money when they lost, and as he was dealing you could tell he spent six years coaching in Las Vegas for the ECHL Wranglers - he had the "clean hands" move down when the official dealer came in to reshuffle the deck for him and would yell out "changing 1000!" whenever someone would cash in for chips. 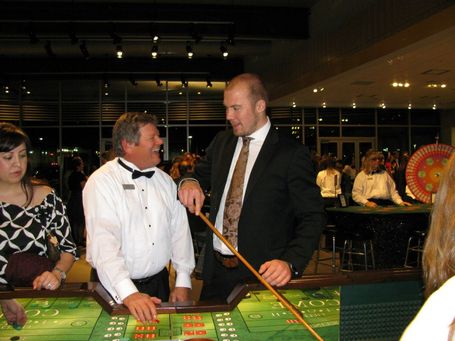 Mark Fistric was at one point setup on a Wii where you could challenge a player to a round of Wii bowling. After observing him play a time or two, I can honestly say he's not someone I would want to play bowling against anytime soon. Eric Nystrom was setup at the Texas hold'em table where he had everyone go all-in on the last hand of the night, which admittedly is probably not something you would normally do with a jack-six off-suit playing for "real" money.

Throughout the night, Stars players are always available to talk with fans, take pictures and even autograph items if asked. It's nice to see the guys relaxed and having fun, and they're all very welcoming of conversation with fans. They smile, they joke, they even help you out at the tables! Loui Eriksson dealt himself a blackjack as the dealer, and he proceeded to rearrange all of our hands until everyone had a winning hand. The official dealer didn't look too impressed with what Eriksson decided to do at his table, but all of the players at the table had quite a good laugh. 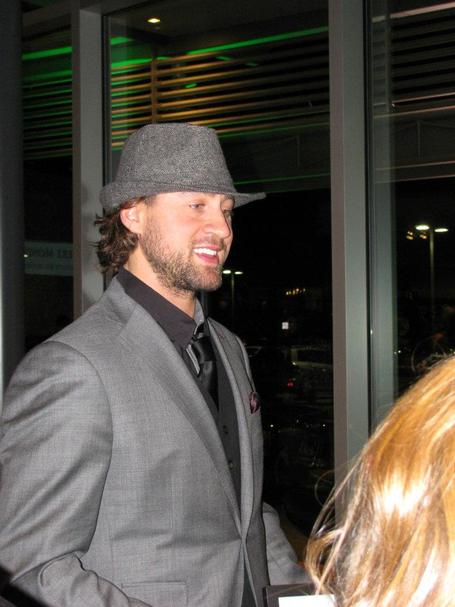 As the casino portion of the evening ends, you take your chips and exchange them for raffle tickets to be included in give-aways. Ralph Strangis and Darryl Reaugh, the Stars award-winning analysts, got up on stage and emceed the live auction. This was for once-in-a-lifetime experiences. You could bid on the chance to ride the team plane for an away game complete with hotel and tickets to the game. There was a chance to sit with Ralph and Razor in the broadcast booth for a period of a game and eat with them in media dining before the game, among other similarly awesome experiences. These live auction items are not ones you can just go out and purchase at a store, which is what makes this part of the evening so interesting - for something that's so unique and hard to put a dollar amount to, what would people bid to be able to take part in them?

Lora Farris, the Stars' Foundation director, said they had their highest turnout yet for this year's Casino Night. Over 600 people attended, and they raised roughly $250,000 for the Foundation. The Dallas Stars Foundation is committed to aiding local charities and organizations to further their causes and missions, and deals mostly with charities that benefit children. For more information on the Dallas Stars Foundation, visit their website or like them on Facebook.