When this little part of the schedule for this season came up, I doubt many of us paid much attention. Yet after Thursday night's emotional, highly-charged shootout win against Los Angeles, it became instantly clear the Stars were facing a very tough turnaround against a Colorado team that arrived in Dallas before they did.

Here lies the biggest case for the need for realignment, all bundled up in a 48-hour time span. The Dallas Stars play in perhaps the most entertaining game of the season against the Kings, yet because of the 9:30 local start time in Texas only a handful of hardcore fans actually witnessed the end of the game. It's not right that most road games for the Stars -- especially against division rivals -- force the fans to become zombies the next day at work just to enjoy the game.

Then, the schedule called for the Stars to travel back to Dallas for a Saturday afternoon game against Colorado. The Stars, because of the time zone change, arrived in Dallas at around 5am on Friday and had less that 36 hours to recover and play a game against the high-speed Avalanche. Even for a professional hockey team, traveling in relatively luxurious conditions via plane, this is a tough task to ask of the players. We even see this sort of let down in baseball, where the physical toll on the players is much less.

It's easy to say "the Stars are just using the schedule as an excuse", but the truth is that this sort of turnaround between games is detrimental to any team -- not just the Stars. Including the loss by Dallas on Saturday, teams this season are a combined 0-5-0 when forced to play at 7 p.m. local, change time zones and lose an hour, then play earlier than 5 p.m. local the next day. Dallas is the only team in this category that had to change two time zones.

So, this isn't just about the Stars "not adjusting", this is a quirk to the schedule that instantly puts teams in a bad situation. There are still five more situations like this coming in the second half of the season, none involving the Stars. This is something that should be addressed -- not just by the Stars, but by the NHL in general.

More on the actual game after the jump. 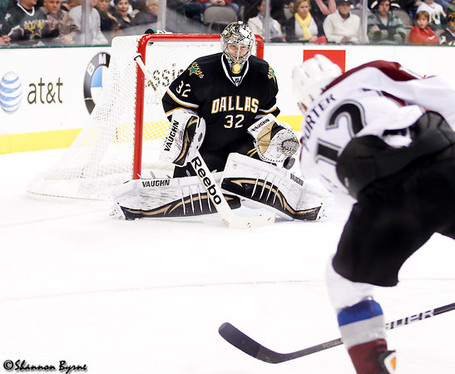 The Stars, with just nine shots on goal in the first and second period, did little to put much offensive pressure on the Avalanche. The Stars were slow-footed, weren't skating well without the puck and making lazy passes for most of the game. This team relies upon it's tenacity and pressure to score goals and create offense and when that tenacity isn't there, the Stars are going to struggle mightily.

The Stars went down 0-1 early in the game when Kari Lehtonen, who played exceptionally well overall, misplayed the puck behind the net leading to an easy goal for David Jones. With the Stars playing a wholly uninspired game, that sort of mistake was backbreaking and took the Stars the better part of the game to make up.

"I shouldn't have gone there (behind the net) when I see that they are pressuring so hard," said Lehtonen. "Their guy was giving me lots of pressure. I should have just stayed in the net and made our D go get it and probably get hit; at least I would have been in front of the net."

Once Vernon Fiddler, perhaps the only Stars player with some pep in his step, tied the game with a wraparound goal in the third period, the Stars finally found their legs and started putting some pressure on the Avalanche. Unfortunately, a disputed penalty call against Steve Ott led to a quick power play goal for the Avs -- yet another goal that Lehtonen would like back.

"I should have been more aggressive on that second goal and the first goal was all on me," Lehtonen said. "That's two too many in a tight game like. I feel like that was the difference, so it doesn't feel good right now."

The Stars, despite the low shot totals, had their chances in the first 40 minutes, including a Jamie Benn shot that J.S. Giguere made one heck of a incredible save with a flailing glove while on his stomach. Steve Ott would also have another prime breakaway chance, yet pushed a rolling puck wide. While it's perhaps not as fair considering how the Stars played for most of this game, the difference was that Giguere made the big stop while Lehtonen allowed a few soft goals. 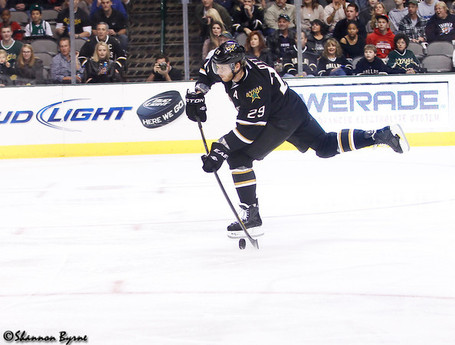 It was painful to see a Stars team struggle this way after yet another big game, a trend we're starting to see way too often this season. The travel was certainly an issue and it was apparent how much it affected this team, but the simple truth is that the Stars are too often unable to carry over any momentum from game to game -- a big reason they are still on the outside looking in in the playoff picture.

"Obviously we traveled, but that's just an excuse," said Fiddler. "We need to find a way to get points in these games."

The Stars, unable to generate any offense for most of the game, were once again the victims of lack of emotion in their game. It's troubling that the Stars, when playing against a Western Conference team they are fighting for playoff position with, are unable to find a way to get points even when the energy and emotion level aren't high enough. Unfortunately, this has become a trend this season -- and when the power play is struggling, the Stars have little to rely on when they aren't at their absolute best.

"It wasn't our best in the first. I think as the game went on we got better and better," said Morrow. "As tough as that is on the body physically I think it is all a mental battle. If you're telling yourself that you should be tired because of the travel then you are more than likely going to be. You've got focus and prepare a little extra to get the body going. We obviously didn't do enough because the start wasn't what we wanted, but we battled hard and got back in the game."

The Stars had their chances in the end, with 13 shots in the third period and the tying goal by Fiddler. After the Avs took a 2-1 lead midway through the third, however, you could see the team deflate and lose the drive they had been building to start the third with. The Stars would have one last shot, a 6-on-4 opportunity in the final minutes, yet Michael Ryder would flub a wide open chance in front of the net -- perhaps a perfect example of just how this frustrating game went. 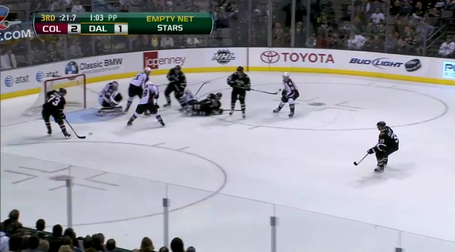 The travel is just another issue and excuse, something that can't be ignored but shouldn't be used as a reason for the loss. The schedule doesn't get any better, with two back-to-backs this week -- starting with a road game against St. Louis followed by a tough home game against Detroit.

Frustration, energy, consistency -- these are the terms we tend to continue to use in games after a big win, something that needs to change, and fast.