Dallas Stars training camp 2011 rolled on today in Charlottetown, Prince Edward Island as new head coach Glen Gulutzan continued installing his philosophy in short morning practices. The day culminated with an early evening scrimmage in front of a crowd of thousands, and a Tom Wandell shootout winner for team black to break the tie.

Coach Gulutzan spoke to Mark at ESPN Dallas about day two of practice...

"We just wanted to go through some of our forecheck and our tracking," Gulutzan said. "We had about 50 minutes to get through it and I thought the guys did a real good job."

"We'll be looking at the three backbones of our team and then two other little things we've put into play that we want emphasize this year - having a good net presence and being able to put pucks into space and create some speed," Gulutzan said. "We want to make sure we are looking for those things, but the spine is the most important thing."

More after the jump, including the scoresheet from the scrimmage...

Assistant coaches Jerrard and Barnes coached against the Texas Stars duo led by Jeff Pyle, allowing Gulutzan a birds eye view of the proceedings, which as he put it, is a rare opportunity for him to do so. Marc Crawford likes to do the same thing in Frisco his first year with the Stars.

As for the scrimmage, there is no video available and no official scoresheets. Twitter provided a breif synopsis and you can check out the Dallas Stars official twitter list to see Ralph and Razor's running comments throughout the game, including a Steve Ott quote from Razor that includes the phrase "pooping yellow." Seriously.

Stars PR tweeted a screen shot of the Stars scoreboard in the locker room. Here: 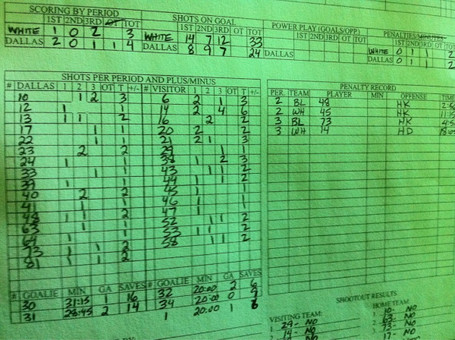 It appears as though Jamie Benn led all players in SOG with six. All five goaltenders saw some brief action.

It was said by a few on twitter that Adam Pardy and Sheldon Souray were paired together for at least a time, and that Benn/Eriksson/Ott saw some time together as a line. Both of those scenarios have been speculated upon heavily, so it was nice to see that the Stars could be thinking along the same lines.

Scott Glennie and Stephane Robidas sat out for preventative reasons with minor issues.

Monday marks the final full day of practice and video sessions in PEI as the club gets ready to take on Montreal on Tuesday night, and is scheduled to be back on the ice Wednesday morning in Frisco.