The Dallas Stars are headed to training camp this weekend, kicking off the first official practices of the 2011 season in PEI on Saturday at noon. The players have been in Frisco the past few weeks working out on the ice on their own and after three straight years of frustration, there's a growing sense of optimism around a team that has been underwhelming at best despite loads of potential.

One part of training camp that is always interesting is seeing which young players might make the push for the NHL. Two seasons ago Jamie Benn set the preseason on fire and forced his way onto the team. Last season Tomas Vincour and Aaron Gagnon made it tough to send them back to the AHL and both spend considerable time in the NHL later in the season.

As we approach this year's training camp I look at the roster and wonder if there is even a spot up for grabs and if so, who might take it? 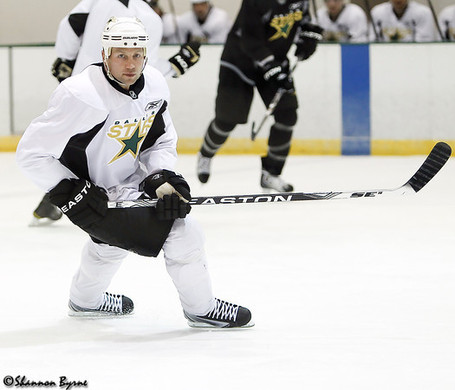 What's interesting about this preseason is that the feeling about the team with the new coaching staff is much different than the last time the Stars changed the man behind the bench. Going from Dave Tippett to Marc Crawford was met with criticism and trepidation, as fans didn't really know what to expect from one of the more infamous coaches in the NHL. Sure, we were intrigued to see what this new "system" might bring after Tippett but there was still an air of pessimism about the whole change.

This season, Marc Crawford has been jettisoned in favor of the young and charismatic Glen Gulutzan who brings with him a completely different approach to coaching a hockey team. He's been successful as a coach at the ECHL and AHL levels and preaches responsible hockey while also acknowledging a need to connect with his players. On top of that, he talks about making hockey fun again for the Stars -- something that has been sorely lacking the past few seasons.

One way that any new coach can make waves with a team is creating competition on the roster. He sends a message that no player is safe no matter how much tenure they have and that only performance and production matter. In hockey, it's much tougher to just outright cut someone like what happens in the NFL, but there's nothing more effective than sending a message by giving a young player a healthy chance to prove himself -- and forcing the veterans to do the same.

We don't know what sort of coach, in this regard, Gulutzan is going to be. However, even if he encourages competition, given the nature of the NHL contract system and the finances of the Stars it's going to be tough for younger players to force themselves onto the roster.

The Stars currently have 22 players signed to a one-way contract. If you'll remember, a one-way contract only means that if that player is sent to the AHL then they are paid their NHL salary. Two-way contracts only mean the salaries change if the player makes it through waivers -- if necessary -- and make it to the AHL. These financial implications are very important to the Stars right now because many of the players currently in the AHL who might take one of these spots would then see their salary jump considerably.

Let's take a look at the current roster, with players signed to a one-way contract: 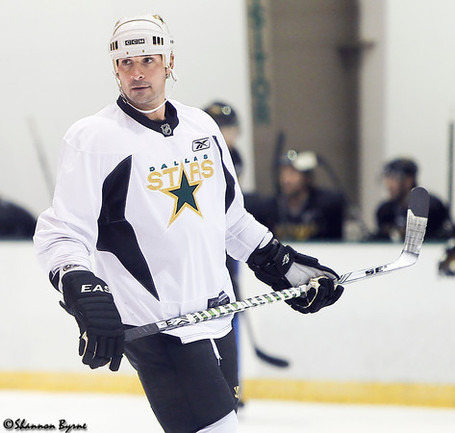 That's 22 players already signed with 23 spots total available. The problem is, that final spot is likely going to be taken by Eric Godard, signed to a two-way contract this summer for the Dallas Stars. So, with 23 rosters spots apparently filled, is there even a chance for a younger player to make the team? If Glen Gulutzan is serious about being competitive, holding the team accountable and winning -- there certainly should be.

In a perfect world, the Dallas Stars would put the best players in the NHL that they could regardless of contract status. We have to remember that even if a player has a two-way contract, like Godard, they still need to pass through waivers on their way to the AHL if they've accrued enough playing time. That's a big factor as well, although there's always a chance that a player like Godard or Petersen could make it through unscathed -- they'd just have to be outplayed in the preseason by younger players. Considering what role Godard was signed to fill -- to make the Stars a tougher team to play against -- I find it hard to say he's one of the first to go.

At the same time, if a younger player does make such an impression in camp that he's obviously ready for the next step, the front office is going to have a difficult decision to make. It seems as if the roster is already set and ready to go, but there's always the likelihood of a player forcing his way onto the roster and someone like Godard or Barch could be the sacrificial lamb.

Hence, there appears to possibly be one spot -- likely at forward -- at least open for competition from the young players at camp. Tomas Vincour, based on his playing time last season with the Stars, likely has a leg up on the competition and should get a considerable chance at claiming this spot.

More importantly, Vincour's salary is only $800k at the NHL level. If someone like Scott Glennie were to make the NHL roster, his salary would jump from $67,500 to $900k, with potential bonuses reaching a total salary of $1.6 million. That's not an insignificant jump for a team with a limited payroll, who is about to file for bankruptcy at any hour.

Forgetting the financial implications for a moment, let's take a look at who could actually push for an NHL roster spot if contracts had nothing to do with the process.

The first name that comes to mind is Brenden Dillon, who appeared to be near-NHL ready at this week's prospects tournament. He's recently out of the juniors and only played a handful of games for the Texas Stars but he's already bringing with him some hype that he's going to be ready for the NHL much sooner than later. Unfortunately, the Stars already have seven defensemen under contract and it's going to be tough to see Dillon take one of their spots right away out of camp.

More importantly, if Dillon were to make the NHL roster, he'd likely be taking Mark Fistric's spot and become the seventh defenseman on the team. For a player with lots of talent yet is still lacking in overall experience, it's important that Dillon get valuable minutes as a top-pair defenseman and he'll get that in the AHL -- not in Dallas. Perhaps this is a case of Dillon starting off  in the AHL before breaking in with the big club out of camp.

There are two other names coming into camp that intrigue me. Richard Bachman and Tyler Beskorowany both had sensational seasons last year in Austin and both were stellar in camp last year as well. Beskorowany in particular has come on the past year like a bat out of hell, showing impressive skill and fortitude in net after taking the backup position in Austin once Brent Krahn was injured.

Both are going to get a chance this preseason to prove they belong in the NHL and to take that backup position from Andrew Raycroft. Forcing the front office to make a difficult choice in net behind Kari Lehtonen is a good thing -- unfortunately, Raycroft's contract switched to a one-way contract after last season. The good news is that he's only going to be making $600k, a very manageable number should the Stars decide to go that route.

What about forward, however, since the Stars currently only have 12 forwards under contract? 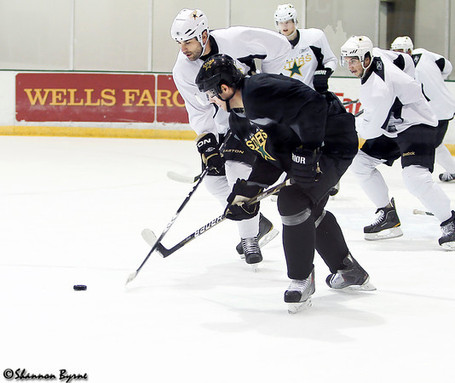 Of course, there's always Vincour, who showed some skill and lots of energy in his time with Dallas last season. Ondrej Roman looked much better in Traverse City this weekend and could get a good look as well, although it seems that he's going to need more time in the AHL to really start to realize his potential.

That brings us to Matt Fraser, an intriguing prospect who was one of the best players for the Stars in the tournament and who is coming off a tremendous season in the CHL. He's a late bloomer who wasn't signed by the Stars until last season, but there appears to be some real potential there for a diamond in the rough.

Fraser could provide a good scoring boost on the fourth line for the Stars, especially if he's playing with Petersen or Wandell. There's speed and physicality there, along with good scoring potential. This would also help to set up the four rolling lines that Gulutzan has been preaching and something the Stars have been needing for a few seasons now.

Yet, like with Dillon, Fraser would be fighting for that final forward spot and could end up getting scratched on a number of occasions. The question is whether it would be better for the Stars to have Fraser in the NHL, rather than have him further developing in the AHL.

There are a few intriguing battles coming in training camp, even if the NHL roster already appears set. If the young players make a big push -- like Jamie Benn in 2009 -- then we could see some very interesting choices being forced upon the coaches.

All photos courtesy of Shannon Byrne; please visit her site at www.myhockeyshots.com