The Allen Americans Are Keeping Spring Hockey Alive in DFW

Share All sharing options for: The Allen Americans Are Keeping Spring Hockey Alive in DFW

It doesn't matter what league it is or where you are, there's just something exciting about professional hockey being played in May. That's what I discovered on my first trip to the Allen Event Center to watch the Allen Americans play in the Berry Conference Finals against the Bossier-Shreveport Mudbugs.

Call me a hockey-junkie, but there's just something about the smell of a rink and that gentle blow from the air conditioners as the Zambonis do their thing while the hot dogs smell up the concourse...It felt like months since the last Dallas Stars home game. (23 days is a long time, OK?) That's what awaits you at game three tonight in Allen @ 7:30pm if you want to make the trip. I highly recommend it, for those of you who have yet to partake.

I came away from the experience with many of the same impressions given to me after my first of two trips to Cedar Park last year during the Texas Stars playoffs, mainly: Great buildings, and AWESOME fan bases that at a glance look like seasoned veteran groups with deeply ingrained traditions already.

The fans swarmed the concourse early, nearly all in Allen American red garb from head to toe. The "Red" is very big here. It's in the goal celebration, which is awesome and culminates in the crowd chanting "Red! Red! Red! Red!". It's in the fan blogs (http://www.livininthered.com/). It's everywhere.

The raucous charm of minor league hockey is definitely there, even if the style and caliber of play may not be what you're accustomed to if you're largely a fan of the NHL. There's a certain intimacy and accessibility that lend themselves to the draw of the setting. Success on the ice hasn't hurt the Americans either...

Needing this particular game to avoid falling into an 0-2 series hole to the "Mudbugs" (kudos to all of the Mudbug fans at the game that presumably made the drive from Shreveport, btw. Excellent showing for a CHL road game) the Americans were on the ropes for much of the first 30 minutes of the game before their power play delivered a three goal explosion that won the game for them.

I won't pretend to know their usual style of play or schema from a two hour experience but I will say that scoring chances for both sides were more often than not the result of only an outstanding individual effort by a single player, or else a power play, of which there were many.

Aside: Only one referee at this level, and I felt pretty bad for the guy all night because that is an impossible job to do by one's self. Lots of dirty stuff was missed because the poor guy can't have eyes in the back of his head. I suppose that element of being able to get away with more adds to the charm of the proceedings.

The 18 team CHL, Central Hockey League, not to be confused with the CHL Junior Canadian leagues, has a four round playoff structure just like the AHL and NHL do. (Yes, that means 16 of 18 teams make the playoffs). Allen fell in the Finals last season to the Rapid City Rush (South Dakota) and are looking to make it back there again. They were awarded an extra home game (tonight) because of a conflict with the Mudbugs building in Louisiana, though the Mudbugs will wear their home jerseys and get last change.

Despite the affiliation with the Stars you're unlikely to see anyone about to bust his way up the chain any time soon (though I am to understand that Jordie Benn played down there last season briefly and he's now with the Texas Stars) but it's not really about that. It's pure, unadulterated hockey fun with people that are passionate season ticket holders and love their guys. Especially the 5'6" Colton Yellow Horn and goaltender Chris Whitley who was great as the game wore on.

If you're a hockey nerd like me I highly recommend making it out there for one of these playoff games at the beautiful Allen Even Center. Check out http://www.allenamericans.com/ details. It's very affordable. $20 bought me row C.

You can check out the Allen Americans Blog Livin In The Red for coverage of the team and also check out Big D Hockey, who covers them as well (and congrats to Ben @ Big D Hockey because he and his wife just welcomed a new addition and future Stars fan to their family). 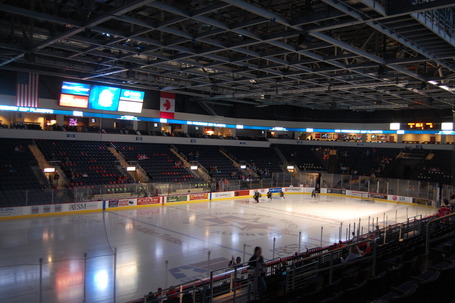 (As I remarked last year of the Cedar Park Center (which feels eerily similar to this building in design, probably because they were designed by same firm, evidently) it's like taking the AAC, ripping off half of it, slamming a roof down on the lower bowl and stuffing all the roudy people down low. It's great.)