Hockeymetrics: An Update on the Stars Team Metrics Against the NHL and Their Pacific Division Rivals

Share All sharing options for: Hockeymetrics: An Update on the Stars Team Metrics Against the NHL and Their Pacific Division Rivals

It's been awhile since I've written a Hockeymetrics post based on the team metrics and the oh so popular graphs that accompany them.

Since then, I've actually broken down the stats by various categories, including by Pacific Division opponents.

Now I'm as thrilled as anyone that the Stars went 3-0-1 on this recent road swing through Phoenix, San Jose, and Southern California. But just as Art threw a little cold water last in pointing out that the Stars, while picking up 7 out of a possible 8 points, did a lot of work in the points department, they also allowed their opponents to pick up three points.

And overall on the season, the Stars are still on the wrong side of the ledger when it comes to point differential within the Pacific Division (19 points earned and 21 surrendered in games within the division).

And there's more cold water to be thrown on you after the jump, so get those towels. 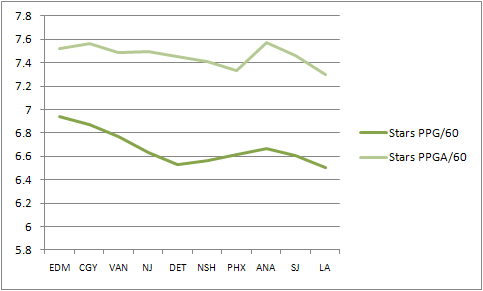 That's a snapshot of the Stars power play and penalty killing rolling averages over the last 10 games.

In fact, it's been trending downward from a GF/60 standpoint ever since it hit a high of 7.648 after the Stars beat Edmonton 4-2 back on January 20th and James Neal scored a power play goal that night, the last power play goal he scored as a Dallas Star, by the way.

After last night's game in which the Stars failed to score a power play goal for the second consecutive game, their GF/60 for the season now stands at 6.507.

Thankfully, Jamie Benn masked a lot of those warts over the last week with his timely power play dagger against Phoenix and pair of short handed breakaway goals against San Jose and Los Angeles. But it'd be nice to get this power play back on track as we roll on to the playoffs.

As we've seen in playoffs past, it's all about special teams and goaltending.

Next item on my agenda is a look at how the Stars have fared against their Pacific Division rivals through the season.

The figures in the kelly green background represent the highest GF/60 in total goals scored, even strength, power play, and shorthanded. The figures in the gold background represent the highest GA/60 in those same categories. For the purposes of this exercise, I excluded the goal the Stars picked up in their shootout win at San Jose back in December.

And yes, you are reading the shorthanded GF correctly. Coming into this roadtrip, the Stars had a goosegg on this ledger before Benn wowed us Saturday night in San Jose and last night in Los Angeles.

As you can tell, the Stars have had a great deal of success offensively at the Sharks expense this season. In fact, they've scored at least three goals against San Jose in each of their four meetings this season.

Conversely, they've struggled a bit against the Ducks for some reason. In fact, Dallas had not broken the three goal barrier in any game against Anaheim this season until Friday night. And it wasn't enough against the team from Orange County, who have hit the four goal barrier in 3 out of the 4 meetings thus far this season.

Not to mention the Ducks are absolutely killing the Stars on the power play.

Dallas has also struggled to score against Phoenix in their last four meetings after registering six goals back on November 5th in the first meeting of the season between the two teams. Dallas followed that effort up with just two goals in their first meeting in Glendale this season, before getting shutout at home the night after Christmas and dropping a 3-2 contest in OT almost a month ago.

And had Jamie Benn not scored that well chronicled power play goal last week, it's a very real possibility they would have failed to break the three goal barrier against the desert dogs for the fourth consecutive game.

And then there's the season series against Los Angeles.

After dropping a 5-2 contest in their first meeting of the season series back on October 27th at the American Airlines Center, the Stars have actually managed to hold the Kings in check for the most part.

The Stars have sandwiched a couple of efforts where they held the Kings to three goals around a 2-1 win at home back on January 17th. And when you consider how much Anze Kopitar has killed the Stars with his goal scoring, it's an accomplishment that he has yet to score a goal against the Stars this season. Though he's found the assist ledger in all four games in the season series this year.