"It's playoff hockey, let's be honest here," Dallas Star Steve Ott told the media after their 3-2 win in San Jose.

It's such a cliche but this emotional roller-coaster the Stars and their fans are on now can be described in no other way. The big win last night solidified the 6th Western Conference seed this morning and that's with only using one tie-breaker with Calgary. (I have a feeling we'll all be very familiar with every tie-breaker soon)

Weren't they just in 6th place? Yes, four days ago after an equally big win over Phoenix, but then they had to wrestle it back after occupying 9th and 8th places until the comeback over San Jose was complete. If Calgary beats Nashville today they'll push the Stars to 7th and Dallas will try to take 6th back once again on Monday night.

That's how tough it's going to be every night the rest of the way. It's daunting to think that they'll need these same kinds of herculean efforts every night just to get into the top eight but with every team putting for this kind of effort and no one dropping out of the race, the only possible solution is to keep collecting points in regulation.

If all that wasn't enough, the Stars add their own special brand of drama to the proceedings that really make my systolic/diastolic do interesting things: They win when trailing after two and they give up the lead when they take it into the third period...

The Stars have collected a league leading 18 points when trailing after two periods. As a percentage of their 77 points that is a very big number and it proves why you don't leave a hockey game early, but still it's a number you'd like to see them add to only in grave need.

While Dallas is the best in the league at winning a game they trail at the second intermission, the numbers still say they'll lose 70% of the time in that situation. Of course, after back to back games where they lost one they were winning after two and won a game they were losing after two, we might have to throw the numbers out the window for the remainder of the month and turn our brains off.

Speaking of numbers, to reach 95 points the Stars must finish only ONE game over .500 the rest of the way (though it would avoid a great deal of tie breakers and also the Vancouver Canucks if they'd do a little better than that).

Can you imagine eight more punches to the gut like Anaheim on Friday night? If that's the price that must be paid, the fanbase must endure it. 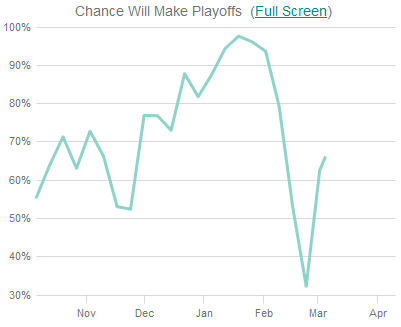 Some of you are familiar with the greatness of Sports Club Stats and the math they do and the neurosis riddles scoreboard watching they enable.

Above you can actually see the emotions on display and if you follow the team like we do you can look at the crest and trough of each wave and name the milestones that have made up the season. (The win over the Oilers on 1/20 is the high point there)

The have the Stars in the playoffs in two out of every three scenarios they run and are currently placing as many as ten percentage points either way on the outcome of each Stars game, and that will continue to increase as the race stays this close, or until the Stars separate themselves from the 6-11 pack on one side of the other.

That last segment there shooting straight up is the reason you and I woke up smiling today. It's a 4-0-1 run following a 2-10-1 slide and it has us greedily eying the Kings on Monday and thinking a 3-0-1 road trip through the Pacific sounds mighty nice right now.

Just know that if you've chosen to put all your emotional eggs in this basket like we have, there are more dark times ahead, but weeks like this one have shown us that this team is serious about writing a much happier ending to this story than last years (in which the roller coaster was derailed in a fiery explosion), and that's worth sticking around for.

And if you don't believe this is playoff hockey already, come to the AAC during this upcoming seven game home stand and see for yourself. Jamie Benn requests the pleasure of your company.

As for me, I know it's playoff hockey because in my living room I've seen the "leaping off the couch to goals ratio" take an unseasonable and violent upswing lately, with the occasional remote-control-throwing forecast in the near future.