With about four and half minutes left on "the clock", American Airlines Center goes dark. The San Jose Sharks are here for a big matchup with playoff implications, 17,000 Stars fans are tucking in for the evening, and the intro video comes up on the big board over center ice. (Watch and listen to that here to get into the right frame of mind)

I've spent about an hour before the game with Jeff, jovially talking hockey, game presentation, and music, but there's a noticeable change in vibe as the lights come down and the game presentation gets rolling. It's show time.

He provides me with a headset that I use to listen in on the production crew. The show is being run by creative director Scott Robertson behind the scenes and in that four and a half minutes a carefully choreographed and timed sequence of events takes us to opening faceoff involving Jeff K, Bill Oellerman, Celena Rae, Tim Corkhill and countless others.

It's a sequence that I have been fortunate enough to take for granted over the years but it dazzles me tonight, standing there on Stage 101 at what feels like the heart of it all. It's a stunning contrast to the press box where the lights stay on, people spend those four minutes trying to make sure they have a good wireless internet connection, and excitement is persona non grata.

It's the perfect environment for a hockey nerd, and make no mistake: Jeff K is a HUGE hockey nerd first and foremost.

"I am originally from the East Coast and I grew up a hockey fan," Jeff tells me. "I moved to Dallas in 1982 and went a decade without hockey so when I learned the team was coming to town I was very, very excited. Overly so."

Jeff became a season ticket holder from day one with the Dallas Stars and describes himself as the kind of guy who always had the game on the radio in his seat and didn't want to talk until intermission, an intensity he still brings to this day. Just check out his Twitter account during road games.

How did a die hard Dallas Stars fan become Music Director and Game Host for the team?

And what does that K stand for? 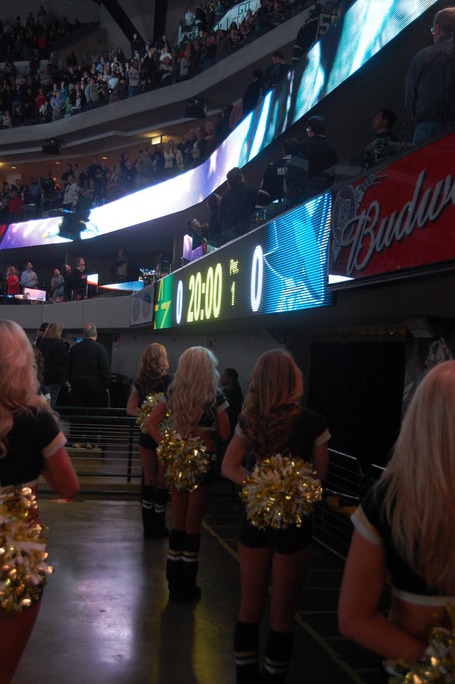 I should have seen that one coming. Surely he's heard that question a thousand times. I soldier on...

"It's a long Russian name and it really only looks good on the back of a jersey. Kovarsky. Back in 1986 I had 72 hours to come up with some DJ name when I got my first radio job, and...you can't be all suave saying Kovarsky." He jokes that this was before anyone had heard of "Mike D."

He's been in radio in the DFW area since then. A graduate of UT Arlington, Jeff spent many years on air with many different stations including a long stint with Susquehanna radio and three format changes at their 93.3 frequency. He took his family to Los Angeles in 1996 to, as he puts it to me, "chase a dream" and 18 months later ended up back in Dallas.

He eventually ended up with Clear Channel Radio Dallas, where you can hear him still on The Old School EDGE show on Sunday mornings and sporadically throughout the year filling in, but he's shifted his daytime job to 'the revenue stream" part of radio, working as a Production Director more behind the scenes.

Of the Stars gig he says "This is my moonlighting job. I finally found a way for the team to pay me to go to games and they bought it!," he jokes. How did he get it?

Jeff built a reputation with the team through the years as a fan of the game and he had players on his shows regularly no matter where he was. "Working in radio I had sort of an angle, maybe more so than the average fan because I would go to the team events and let them know that if any of the players wanted to get on the air I would love that."

"After the team moved to the AAC the front office was talking about [Jeff] potentially helping them out with game presentation and maybe consulting and I had a long standing relationship with the previous music director, Ty Wubker."

The first year Jeff made marketing announcements but had no control of the music. His radio voice was added to the presentation to facilitate a change with Bill Oellermann's role. "While I was consulting the decision was made that Bill might be making too many announcements in game. There's 'big voice Bill' and then there's marketing Bill. Bill sounds great when he's announcing a goal but they decided they'd try a different voice on the marketing stuff."

A season later (two years, really, as the lockout was sandwiched in between) Jeff took over both duties and feels his programming background in radio helped push the game presentation in a direction the Stars were eager to go. 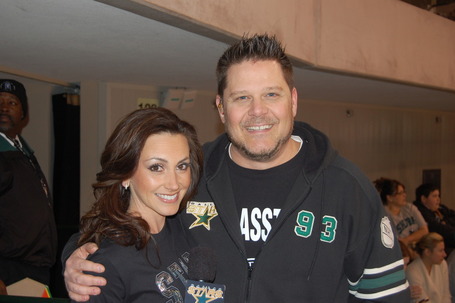 Now he was free to put his mark on Stars fan's experiences, but was sensitive to the long standing traditions already in place.

The Dallas Stars Pantera song, Rock and Roll Part II, The House is a Rockin - These things were put into play by his predecessor Ty Wubker and continue today under Jeff.

What Mr. Kovarsky (sorry Jeff, couldn't resist) has done, beside add his smooth radio pipes, is bring more of a Dallas specific flair to the proceedings whenever possible. He takes pride in highlighting local talent like Toadies, Rivethead, Polyphonic Spree, All American Rejects, Bowling for Soup, etc, and has had a big hand in bringing all those bands and more to the American Airlines Center.

"I make a conscious effort to find things that are uniquely Dallas and bring that to the presentation. Like the 'go stars go' songs by the old 97's, or the goal song I wanted to use one time which was (local band) Polyphonic Spree's cover of Lithium, which is a Dallas based band and something other teams couldn't do."

"You have to walk a fine line. Hockey is steeped in tradition and there's a fine line between creativity and tradition here. We associate our goal celebrations and that positivity with that song and everyone know how to participate [mimicks Rock N Roll Part II - Hey!]"

"To change it would involve a season of unfamiliarity [and] discontent, and when is the right time to do that? In my mind there may have been in the past decade times to do that but the general consensus was no, we're going to stick with our tradition."

"Every year I do present my immediate supervisors with the Stars and the arena with some options for new goal songs - We obviously haven't changed it yet, possibly because I haven't found the right one or just because at this time they're not wanting to make that particular change."

Change is something that is hard to come by at the AAC these days, and this blogger suspects that the impending change in ownership has something to do with it. The effects on-ice are well documented but the staff at the AAC and with the team are hamstrung by it every day. There's a collective feeling of waiting for the other shoe to drop around there.

They all think about it, says Jeff. It's only natural, but the only thing they can do is put their heads down and be the best darn [whatever] they all can be. It's not a time for rocking the boat or trying something new. It's time, he feels, for doing your job well and letting the chips fall where they may when the change happens.

It's probably frustrating from a creative point of view as the staff sees what the Dallas Mavericks and that Mark Cuban $$$ can do with that big 1080p video board and their game presentation, a frustration that extends all the way to the ushers upstairs who [in October] told us there weren't enough of them because of "The Stars' new financial plan." 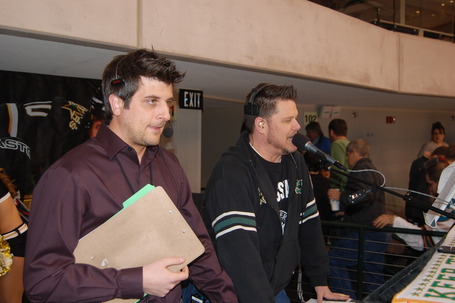 What is "Hockey Music"?

Moving back to game presentation matters, I throw the concept of "what is hockey music" against Jeff's wall to see what sticks. He sees feedback daily on this subject.

It's a far cry from the Dallas Stars of the late 90's who needed to have their Metallica CD's in the locker room.

"Still you have your stereo typical hockey music which is Wayne's World-ish with the mullets and everything, and there's certainly times in-game where that's crucial. But when you introduce the Ice Girls they want the Gaga or the Kesha or Britney Spears. I play Justin Beiber too but I play it during the [ ] haircut cam!"

"If we're down by a goal and we've got 30 seconds left and we need to get going I am NOT going to pick Lady Gaga," he jokes. 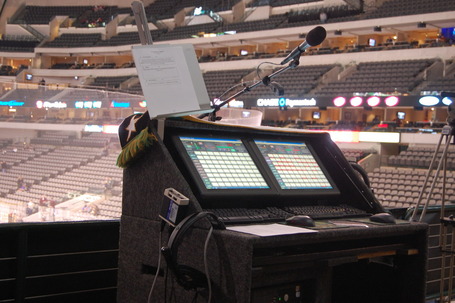 More than a job.

The more he reflects on his situation the more reluctant he becomes to use the word job. He calls is a privilege. He calls it an amazing opportunity, and a gift. He has a scarf that reads "Keep The Faith" draped over his work station on Stage 101.

"I try to accentuate the mindset of the fan. The roll that I try to play is an extension of who I am as a passionate Stars fan. I try to think of what would make us as a group feel even better when we're doing positive things, or what would pick us up when we're not."

Jeff is there to make sure that we all have the best time we can, but at the end of the day it's what's happening between those panes of glass that really runs the show.

"Ultimately the play on the ice will dictate the mood in the arena. As much As I'd like to think that what I do has some great effect, it really doesn't. I'm here to accentuate it. I'm here to make it better, I'm hear to make you giggle. I'm here to make you feel better if we get kicked in the nuts, but ultimately when the team wins it's 'Hey Jeff, the music was great tonight!" and when we lose 5-0 it's "Hey maybe you should have played [this] song instead''!"