Tuesday night's San Jose Sharks / Dallas Stars game produced three very questionable hits - at least in the eyes of many Stars fans - on Dallas Stars players that have at the very least taken out two of their better two-way forwards and a third that hasn't seemed to cause any major damage, but was actually the most blatant of all three head shots.  Lets take a look at them shall we?

Now I understand that these will be freeze frame images and they won't give the true scope of how each play unfolded, but in the case of all three photos, they are captured at the initial point of contact so it should give you some idea.  I've listed approximate times for each hit as well so if you have it on tape or have the replay, you can check it out for yourself.

Here is the first hit by Douglas Murray on Loui Eriksson that happened at about 16:10 mark of the second period just as Loui made a play with the puck but wasn't actually carrying it at that time. 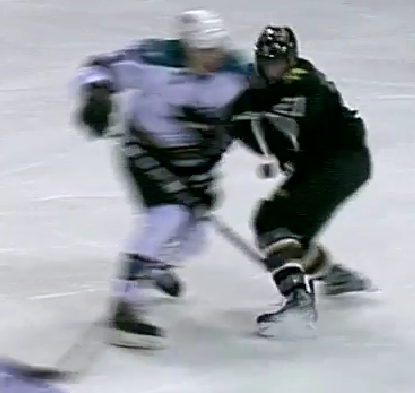 More shoulder to head contact than anything else.  Honestly seeing the replays it's contact made with the head, but Loui is leaning in a little and it's mostly on the follow through.  This was maybe the most damaging of all the head shots dealt to the Stars as we can only speculate that since Loui struggled to get back on his feet and looked like he was on dream street, he's possibly dealing with a head injury.  Still, in my personal opinion I wouldn't call this a "dirty hit" or targeting the head by any stretch.  It's close and I can understand an argument being made to claim it's dirty, but I would have to lean more towards calling it an OK hit.

(The other two hits after the jump)

Here is hit number two on Tomas Vincour - again by Douglas Murray - this time at about the 7:45 mark of the second period.  It was along the boards with Murray having just dumped the puck into the Stars zone and Vincour coming in to defend the play but not in what we would consider a position to make a hit. 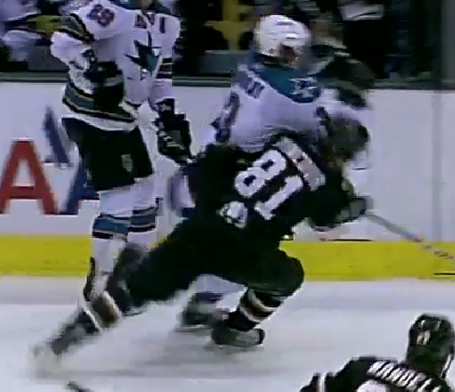 This to me is also borderline but a little more on the dirty side compared to the Loui hit but again not by much.  Vincour did come in leaning a bit and I think you can make the argument that Murray may have been protecting himself some, so there is that to factor in.  Still, Vincour isn't the puck carrier and while he was charging towards Murray, Douglas made no attempt to try and slow himself up and instead plowed right through Thomas with his own forward momentum.  Vincour did stay on the bench and tried another shift five minutes later, but that shift lasted only 8 seconds and it was his last of the night.

Again, I can see where the argument is made that it was a dirty hit and the image above does not look good at all - I'd be happy to be proven different but after watching this hit about two dozen times this really does seem where initial contact happens.  Still, if it were up to me I honestly don't think I could punish this hit.  Fine maybe if a message of some sort has to be sent..

To me as a neutral observer.. If I was to see these two hits involving players from two different teams, I think I'd lean toward them being two examples of the now infamous term "a hockey play" where an unfortunate result comes off of hard hits.  I don't think there was intent by Murray to do nothing but deliver a hard blow and while it may have been borderline at best, I don't think you can write these off as "dirty hits" and if you do, well then to be fair you also have to label Jamie Langenbrunner's hit on Niclas Wallin in the second period where Langenbrunner clearly catches Wallin from behind against the boards even though in 'Langs' defense, Wallin turned his back to shield the puck a moment earlier.

Finally the third and most outrageous of all three hits, Dany Heatley on Steve Ott at about the 4:10 mark of the third period.  Steve Ott had passed the puck and it was well away from him when Heatley took two strides towards Ott, stuck out the elbow... 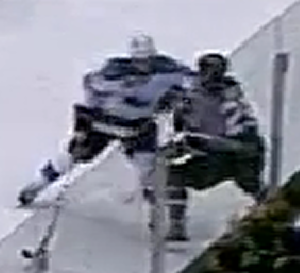 Sorry for the poorer quality on this one.. it was the best angle that FSSW aired and it's blown up some.

This HAS to be a suspend-able hit right?  This is exactly the kind of play that the NHL should be getting rid of above and beyond anything else.  This wasn't a hockey play at all.  This was one player making an effort to go out of his way and throw out his elbow at the face of another player.  Heatley wasn't trying to finish a hit and Ott had gotten rid of the puck well before he was tagged.

Ott amazingly enough took the final two shifts of the game and didn't appear any worse for wear after the game where he took some swipes of his own as league discipline.

The NHL GM's are meeting in Florida this very moment and the hot button topic are hits to the head.  Hopefully some of those GM's were watching tonight's Stars / Sharks contest as two more questionable hits to the head may have taken out both Loui Eriksson and Tomas Vincour with head injuries and a third hit that doesn't seem to have caused any damage, but was given with more malicious intent than the first two combined.

Puck Daddy has since added a good breakdown of the night here.

Of course, all this pales in comparison to the damage done to the Stars season last night. Emotions can run high, but the focus must be on the game. On late power plays. On faceoffs, for instance. They didn't get it done and this kind of extracurricular non-sense is exactly the kind of thing that has no place this time of year. Winning is all that matters, and the Sharks took advantage of the Stars unforced errors to win the game.