Share All sharing options for: Video Review: Analyzing The Loui Eriksson GWG on the Power Play from Alex Goligoski

Hockey is sometimes a game of opportunity. When you miss them, you bemoan those lost chances.

It seems over the past month we've done our fair share of complaining about the Stars power play's inability to either get back into games, or take them over during this February slump.

Yesterday, it finally came through at the most opportune of times when Alex Goligoski fed Loui Eriksson for a redirect past Pekka Rinne. So naturally, when Predator fans either opened up their newspaper or fired up their web browser and navigated to The Tennessean's game story from yesterday afternoon's game, what did they find?

Complaints about the Preds missed opportunity on a short handed 2-on-1 with David Legwand and Joel Ward where the puck hopped over Ward's stick and bounced into the corner for Goligoski to start the play.

We already know Eriksson and Goligoski were part of this play. In addition to those two, the Stars had Mike Ribeiro centering a line with Brenden Morrow as the other winger and Stephane Robidas, who had gone back to defend the 2-on-1 then stepped off the ice in favor of Trevor Daley right before Loui deflected the puck into the net (nice catch by Hillbutton in the comments). The Predators also had defensemen Jonathan Blum and Ryan Suter with Ward and Legwand out on the penalty kill. 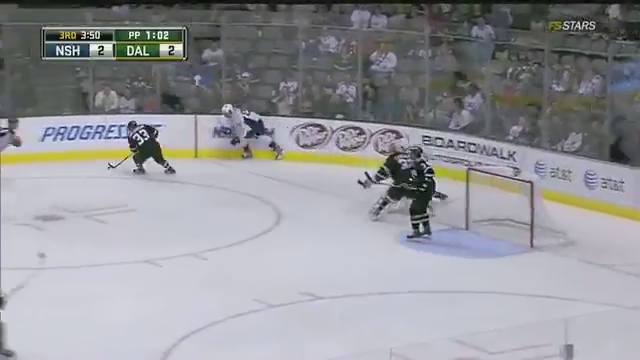 First thing we notice is what happens when you have a 2-on-1 and don't at least get the puck on net. Both forwards are trapped.

And here, Alex Goligoski makes a very cerebral play to gather the puck in the zone and quickly advance it out of the Stars zone and up the ice. 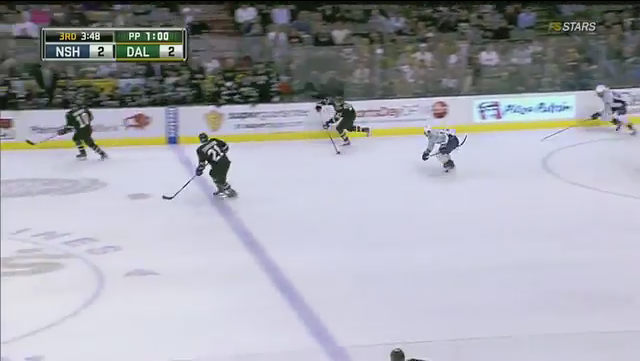 David Legwand has recovered nicely from the botched 2-on-1 and forces Goligoski to pass the puck over to Eriksson to ensure that the Stars still have numbers coming back. 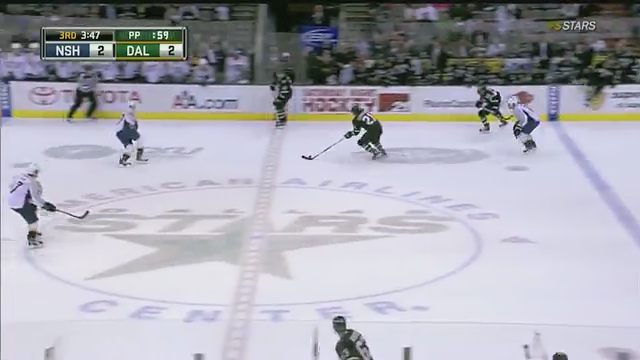 And because of those numbers, Blum and Suter have to back off and give the Stars a lot of space.

Eriksson makes the smart play by passing the puck over to Brenden Morrow... 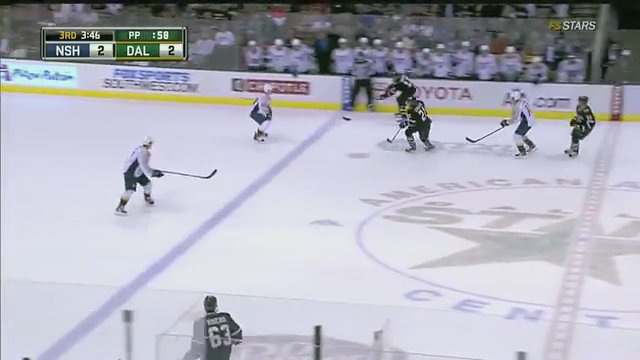 ...who starts to carry the puck into the zone.

By this point, Legwand has gotten himself back into the play with his speed and appears to be well positioned to backcheck if necessary.

Still, look over the far right of the shot and see where Goligoski has started to move to. 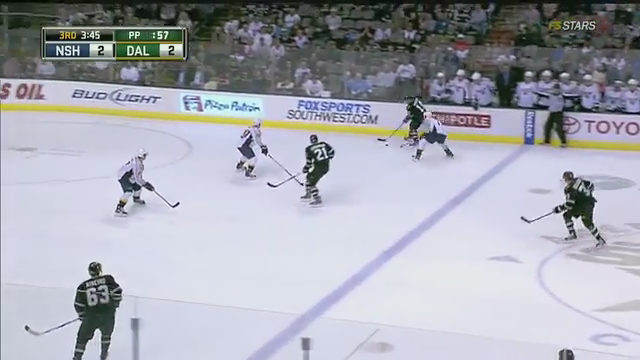 Now look where he is.

I don't know if he anticipated Legwand's backcheck here on Morrow or not. But the speed that the Stars brought the puck into the zone forced Suter and Blum to back off almost all the way to the top of the faceoff circle.

Had that not happened, Morrow would have probably been forced to dump the puck around the boards to Ribeiro on the other side.

Instead, he spots Goligoski filling the point position just inside the blue line. 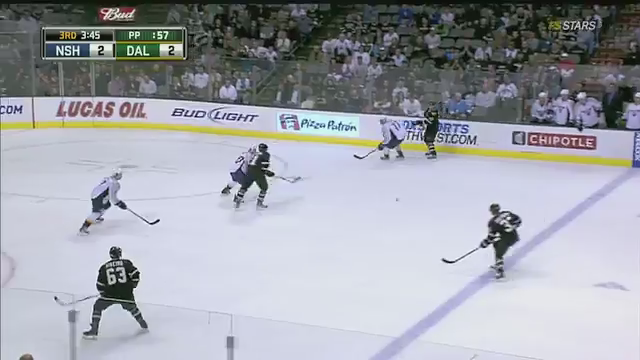 And sends a nice area pass for Gologoski to get. 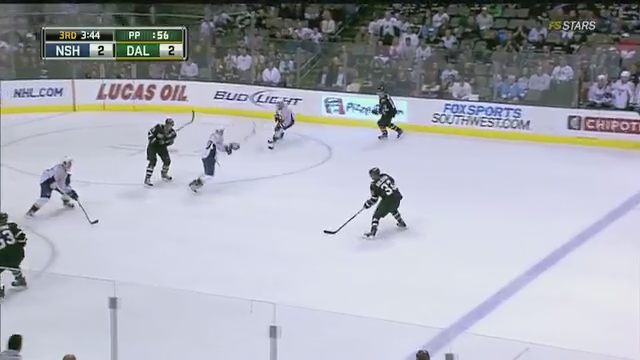 And now Goligoski has a couple of options. He can either fire the puck on net, change the point of attack completely and send it over to Ribeiro, or try to feed the puck to Eriksson, who sneaks behind the Predator defense and around Legwand rather deftly. 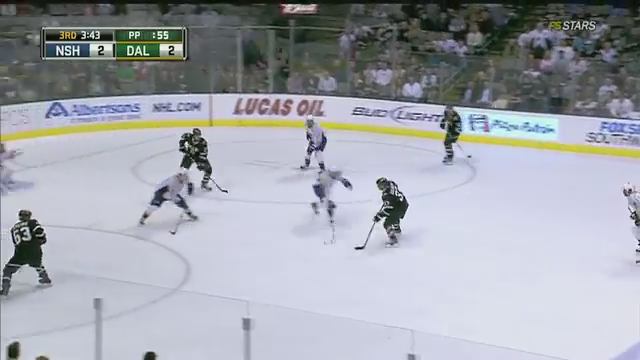 At first, it appears that Goligoski is going to fire the puck on net. His stance certainly seems to indicate that. But Legwand's Ryan Suter does a very good job of closing down the shooting lane with his stick (I reviewed the video after rev0lver19 pointed out in the comments it was Suter who stepped up. Legwand is actually gliding over the faceoff dot in the screen cap) .

And just as a side note, I also think this review shows just how good of a penalty killer David Legwand is for the Predators. He's done everything you could ask a forward on the penalty kill to do. Pressure the man with the puck and make him give it up, thereby, increasing the chances he'll turn it over. 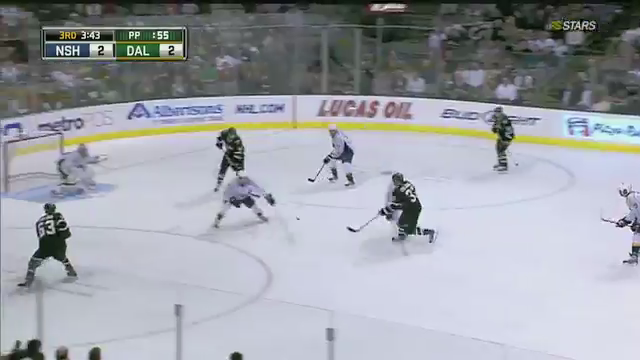 As we know, Goligoski fed the puck to Eriksson.

The one thing that really stands out to me in this screen cap is that Rinne appeared to be so sure that Goligoski was going to shoot the puck that he's still in his stance to make the save.

And because of that... 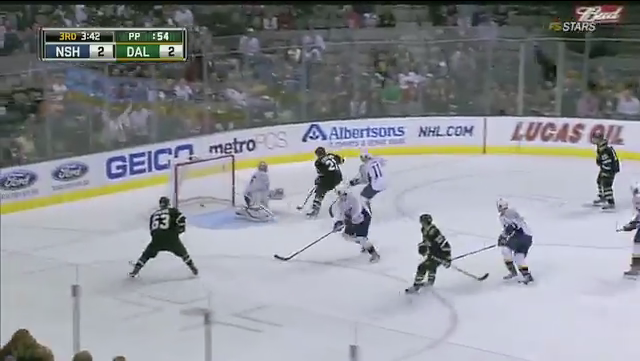 ...he's not able to react in time as Eriksson rather deftly deflects Goligoski's pass into the net for the game winning goal.

And just like that, all those power play woes that have plagued the Stars during this entire month are forgotten. If at least for a couple of days.

And those missed chances by the other guys? Well let their fans worry about that.