Video Review: Analyzing The Back Breaking Canucks 3-on-1 Goal in the Third

Share All sharing options for: Video Review: Analyzing The Back Breaking Canucks 3-on-1 Goal in the Third

And let me just state that I agree with everyone who says the last two games, the effort's been there. The problem, though, is fatal mental errors at exactly the wrong time.

Last night, the Stars closed to within 3-2 on Brenden Morrow goal in the third period with 6:27 left. A few minutes later, Marc Crawford threw the Jamie Langenbrunner, Brenden Morrow, Mike Ribeiro line back out there with a defensive pairing of Karlis Skrastins and Stephane Robidas.

The Canucks responded with the Sedin twins with Alexandre Burrows as the other winger and a defensive pairing of Christian Ehrhoff and Yann Sauve.

Dallas was able to pin the Canucks into their own zone for several seconds and seemed to be on the cusp of possibly tying the game.

But then the proverbial dam broke as the Canucks were able to exit their own zone with a 3-on-1 that culminated in a pretty passing play between the Sedin twins and Burrows to put the game away.

So just how did the Stars allow a 3-on-1 in that situation?

Let's go to video review after the jump. 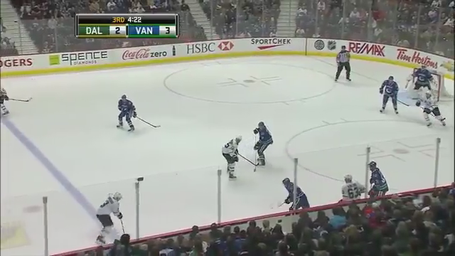 In this first screengrab, you'll see Robidas is manning the right point. Daniel Sedin comes out to challenge him and Burrows is playing the passing lane to the other point where Karlis Skrastins is at.

So Robi makes the smart play by dragging the puck away from the boards to open up a shooting lane where he tries to put the puck on net through three bodies, including that of Morrow, who tried to deflect the puck, but missed. The shot goes just wide of the post to the right of Roberto Luongo and into the corner. 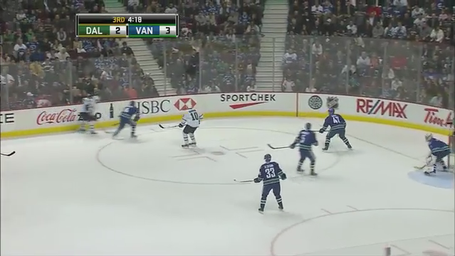 The puck takes a bit of an odd carom and actually travels up the boards, So Karlis Skrastins races in from his point position to keep the puck into the zone. Morrow comes over to offer up puck support, which means another forward has to rotate over to the other point.

Which actually happened on this play. The blade that you see on the far left of the shot belongs to the stick held by Langenbrunner.

But then it breaks down. 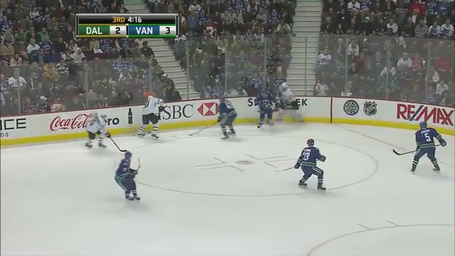 Skrastins opts to not play the puck, knowing that Morrow is behind him. So he leaves it for Morrow.

Problem is, Langenbrunner, instead of occupying the now vacated point position where Skrastins was, tries to float into the high slot for a possible scoring chance. 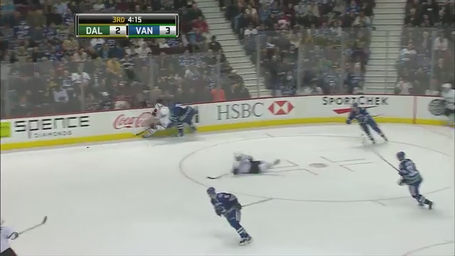 Ralph Strangis announced that Morrow tried to send the puck back to the point where he thought somebody would be. But I think from looking at the video that Yann Sauve actually poked this puck away from Morrow back to the vacated point.

Langenbrunner sees what has happened and tries to slam on the brakes and get back to the point. Except... 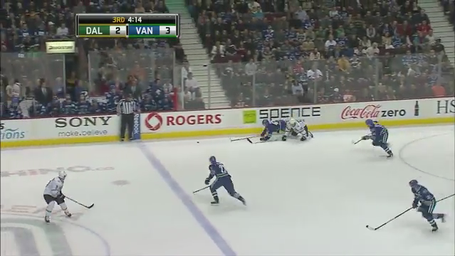 By now, Morrow's in a one on one battle with Sauve to prevent an odd man rush going back the other way. The fact Langenbrunner wasn't at the point would have made this a 2-on-1 anyway. But he blew a tire and Burrows took full advantage by speeding past Langenbrunner to join the odd man rush that would have included just the Sedin twins.

Sauve is able to outmuscle Morrow to gain position. All he has to do is poke check the puck out of the zone and allow Daniel Sedin to pick the puck up. 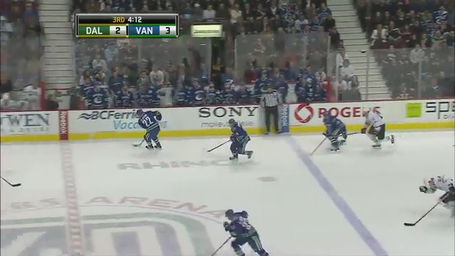 Once Robidas vacates his position to rotate over, Henrik Sedin speeds out of the zone and the Canucks are off to the races.

Langenbrunner buries his head and tries to skate as hard as he can to try and get back into the play... 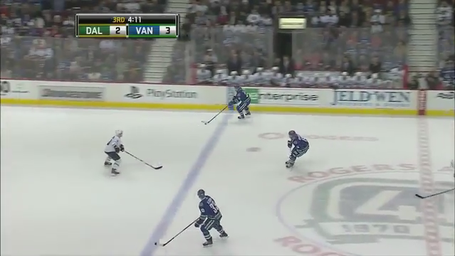 ...but by the time he's able to cross the center-ice stripe, Daniel Sedin has already skated into the Dallas zone and he opts to pass the puck to the "point" that Burrows is manning on this odd man rush. 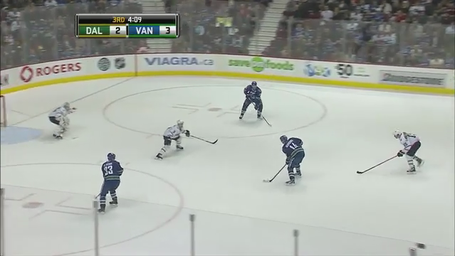 Burrows actually gives Robidas two opportunities to break up the play by immediately passing it back to Daniel Sedin instead of trying to feed a wide open Henrik Sedin. 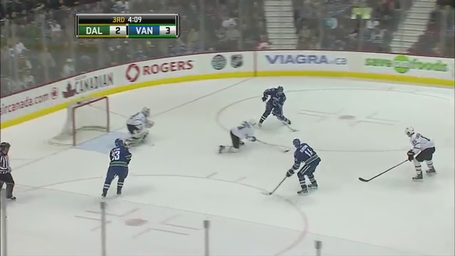 But Robidas can't break up the pass from Burrows to Daniel Sedin with his stick... 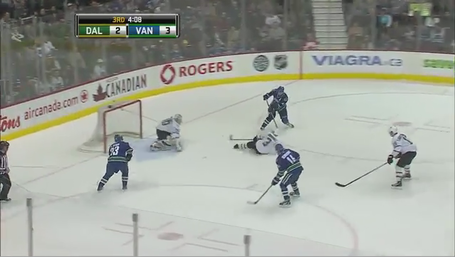 ...and Daniel Sedin is able to slide the puck through Robidas' legs for his twin brother to deposit into a wide open net.

I know that Raffi Torres added his 2nd goal of the game to make it 5-2 just 33 seconds later. But to me, this was the goal that pretty much made it game, set, and match.

And it also shows in a microcosm that while the effort is there, the Stars just aren't on the same page. And against a team like Vancouver, that combination can be fatal as this review proves.