Before the comeback began, there were two key plays to look back on.

The first was the terrific glove save by Kari Lehtonen on a late 5-on-3 power play for Chicago in the first.

The second was Mark Fistric' hip check on Fernando Pisani.

Both plays, in addition to the Brenden Morrow game tying goal had Chicago fans up in arms over at Second City Hockey. But to their credit, they didn't blame it on the outcome just as we didn't blame the Stars getting the short end of the stick back in December.

As for the Fistric hit on Pisani...

Video and analysis after the jump.

And next comes my standard disclaimer anytime I talk anything related to the Blackhawks on DBD.

I grew up a Hawks fan...and I hated the North Stars.

Then Norm Green moved the team to the place I was born and raised and I've been converted.

But the Blackhawks still maintain a soft spot in my sports heart.

And even looking at this hit from the viewpoint of a Blackhawks fan, I don't think there's anything in this hit to suggest it was malicious in any way. If there's a penalty in here, it's for elbowing.

And even then, Fistric didn't lead with the elbow and the injury that Pisani suffered was more from his head whipping off the glass and onto the top of the slightly forgiving boards at the AAC (as Razor said last night on the telecast, thank Bob Gainey for the rounded edge).

All that having been said, the officials on the ice don't have the advantage of looking at these hits in slow motion replay when they make their call.The fact they felt compelled to make a call there is understandable.

I listened to the Chicago Blackhawks broadcast on my smart phone while driving out from mom's house out near Weatherford since The Ticket's signal gets a little dicey out there. Especially when you have a phone charger plugged into the outlet.

As you might expect, their take on the hit was quite different from Ralph and Razor's. Former Hawk forward Troy Murray thought it should have been a five minute major and game misconduct on Fistric for the elbow. Again, I disagree, but I also digress.

Point is the most agreeable fact from both broadcast crews in all this is that Pisani had the puck when he was hit.

And yet somehow out of all that, the refs deemed that hit as interference. 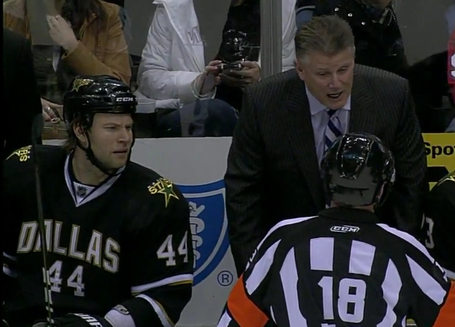 Personally when these mind boggling calls get made nowadays, I start off by not having a strong opinion about it. Afterall, bad officiating supposedly affects teams equally. And even then, there are other plays during the course of a game that have more of an effect than the calls do.

And as a blogger here, the last thing I want to be known as is the guy who constantly complains about officiating.

On the flip side, that means that I'm accepting of mediocrity. I'm accepting of rules like intent to blow which makes no sense when you consider that players at all levels of sports are taught to play to the whistle.

Except in baseball since umpires don't have whistles.

I'm accepting of the fact that goaltender interference will never be consistently applied because there's too much gray area involved with the rule. And the NHL can't be bothered to better explain it's method to this madness.

I'm accepting of the fact that punishments in this league may or may not be carried out on a wheel of justice or a flow chart.

And directly to the point, it means that the officials can just call anything they want to on the Fistric hit because they felt compelled to do so. Even if the call makes no sense whatsoever.

And I can't accept any of that for what's supposed to be the top professional league in all of hockey.