Hockeymetrics: Some Stats To Suggest Our Negativity is Justified

Share All sharing options for: Hockeymetrics: Some Stats To Suggest Our Negativity is Justified

I noticed in the comments of Art's recap last night that some of you think we're freaking out too much about the recent plight of the Dallas Stars. As such, I wanted to respond.

But not with a statistical look necessarily to start out with.

No, the recent failures in the 2008-09 and 2009-10 seasons to make the playoffs are still fresh in mind. So is the swoon in 08-09 when the Stars beat Edmonton to open a six game homestand only to lose the next five to effectively fall out of the playoff race by March.

I also remember last year's post Olympic break collapse where the Stars lost 6 out of 7 to lose their flimsy one point grip on a playoff spot going into the break.

Now yes, I will concede that in spite of the Stars 1-5-1 run in these last seven games, including going 0-3-1 coming out of the All Star Break, they are still tied for the Pacific Division lead. They also have a five point cushion over 9th place Minnesota.

But yesterday, I broke down my Team Metrics spreadsheet by conference, division, and opponent. After I was done, I wasn't impressed with the results, which are after the jump.

Within the Western Conference, the Stars have been outscored 112-98 in regulation and overtime, including 74-67 on even strength, and 32-29 in power play vs. power play. In addition, the Stars have surrendered six short handed goals while only scoring two for themselves. Which basically means they're losing the special teams battle, 38-30.

And it doesn't get better when you look at games just within the Pacific Division, where the Stars are 5-7-1. In regulation and overtime, they've been outscored 41-31. At even strength, they've been outscored 28-17. Now the good news here is they're winning the special teams battle with 14 goals and 2 shorthanded goals. Pacific Division opponents haven't had much success on the power play this year against the Stars, who have only surrendered 11 goals off the penalty kill.

But they lost the special teams battle last night, 2-0, to Phoenix. And that turned out to be the difference in last night's game.

Plus, look around the division and you'll see San Jose has awoken from their slumber of last month to technically take the lead in the division, Phoenix has responded nicely from a 6-0 drubbing against Vancouver to reel off three straight wins and put themselves one point behind Dallas and San Jose, Anaheim just reacquired Francois Beauchemin and improved one of their greatest areas of weakness, and Los Angeles has won four of their last five to put themselves back into the hunt for a playoff spot.

In fact, a few days ago, all five Pacific Division teams were in playoff spots. Now the chances of getting all five in are slim. Heck, getting four in from the same division is a dicey proposition.

And with all the other Pacific Division teams playing better than the Stars right now, it makes it that much more imperative that Dallas right this ship and in a hurry, injuries be damned.

Otherwise, the Stars will be on the outside looking in for a third consecutive season.

In closing this week, I'll leave you with this special teams snapshot over the last 10 games: 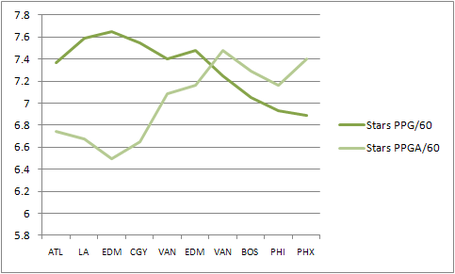