Hockey is a fast paced game and often a close contest can turn in favor from one team to the other in a hurry and when that happens during 5 on 5 play, it's usually due to the fact that one team has made a mistake or two on the ice and the other team is alert enough to take advantage.

Last night the Dallas Stars played fairly well for the first forty-five minutes in their game against the Phoenix Coyotes and were in control of the score 2-1. About five minutes into the third period, James Neal in a split-second decision almost literally passed up on a chance to shoot the puck into what seemed to be a wide open net that would have given the Stars a two goal lead but instead the play fizzles out.

Seconds after that the play stops and the players line up for a faceoff in the Stars zone which is where (after the jump) we start our look back at what could be considered the turning point of last night's game. 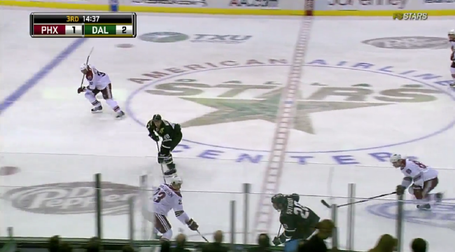 The Stars win the faceoff and exit out of their zone. Here, Brian Sutherby is looking to simply gain the red-line and dump the puck in deep to allow Francis Wathier who is speeding ahead of him by a distance to chase it down.  The Coyotes Mikkel Boedker is in pursuit while Oliver Ekman-Larsson is in front of Sutherby and Michal Rozsival is cutting down the angle on Wathier. This should be fairly routine. 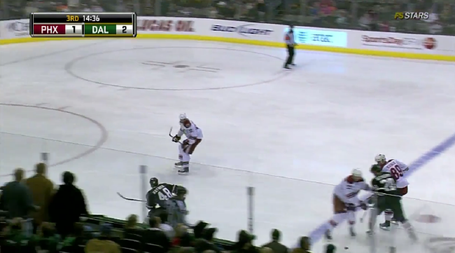 Only the dump-in attempt is a tad weak and bounces off of O.E.L. and slows to a crawl just past the Coyote blue-line putting Wathier well offside.  Sutherby's momentum also takes him offside so both Stars forwards have to quickly turn and tag up giving the Coyotes a chance to regroup with the puck quickly... 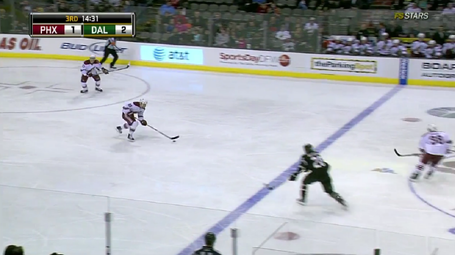 ... Which they do easily as the puck barely makes it to the top of the faceoff circle before Boedker scoops it up and turns quickly back up ice.  Wathier at this point has reset himself back at the red-line while Sutherby has himself turned and in what is the first in a series of bad split-second decisions is looking to intercept the hard charging Coyote puck carrier. 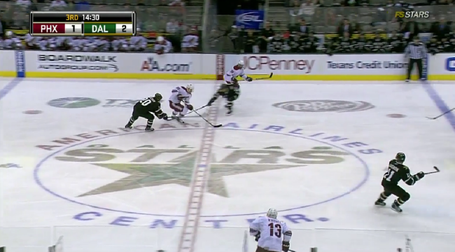 Boedker's speed is no match for the slower Sutherby and Bryan has quickly gone from defender in front of the puck carrier to defender chasing the puck carrier. Wathier meanwhile has been caught completely flat-footed at center ice making a rather weak stick check attempt that Boedker is able to blow past.

Note at the top that Vernon Fidler has slowed up enough to give him the chance to stay onside while Ray Whitney at the bottom is also starting to turn up the ice. Aaron Gagnon is not to far from Ray though and while he does have his focus on the puck, he's also likely aware of Whitney behind him and has him covered. 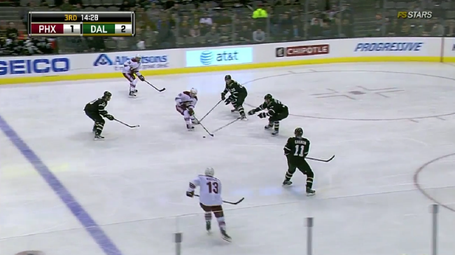 Boedker enters the zone with a lot of speed and begins to cut across the middle with Sutherby still trying to chase him down. Because Wathier was kept his feet planted at center ice he is essentially taken out of the play, but the Stars still could be in good shape here as it's at worst a 3 on 3 situation and with Sutherby in the zone the Stars have numbers.

Karlis Skrastins is the defenseman in the middle and trying to make a play on the puck. Mark Fistric is beside him and while he's keeping an eye on the puck, his real responsibility should be to cover Fiddler coming in from the top.  Gagnon at this point is starting to see the play develop and is still within covering range of Whitney who is also starting to cut across the middle. 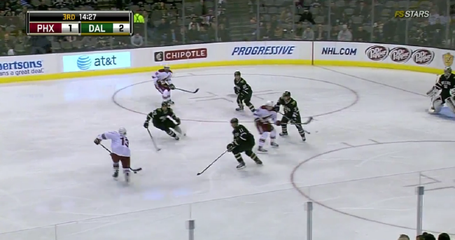 Boedker finds the gap between the two Stars forwards and executes a drop pass to crossing Whitney. Gagnon still has decent coverage on Ray and should be in good position to follow him across the ice. Problem is Sutherby has done a full-stop the moment a pass is made to try and instead of following Boedker through the zone, he has now decided to stay with the puck and cover Whitney.

The problem with the play at this point is two fold: Gagnon is now uncertain of which forward he should be covering and thus hesitates trying to figure out who he should cover while Boedker is allowed to skate through the zone freely. As well, because Whitney has speed cutting across the middle, there is no chance Sutherby - who is caught reversing his direction - will be able to keep up with Ray who will circle around him deeper into the zone.

Despite a bad decision by Sutherby and a moment of indecision by Gagnon, the Stars could have been okay at this moment as Skrastins should be able to read the play here and cover Boedker while Fistric should be keeping Fiddler contained.

Note that all four Stars players have their eyes squarely on the puck while the two defensemen have slowed almost to a point of standing. 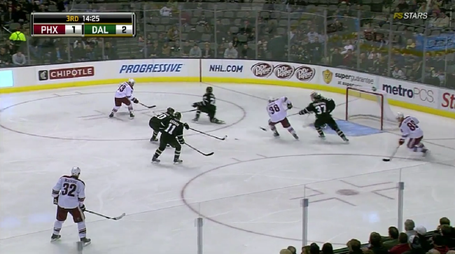 Fiddler cuts past Fistric, who should have been saying with him and to the front of the net to play the part of a decoy and to position himself for a potential rebound.  Skrastins has now focused on covering Fiddler since Fistric has - in another split second bad decision - become pre-occupied with Whiney carrying the puck toward the corner. Boedker meanwhile has crossed the zone and is all alone to park himself in at the side of the net.

Gagnon is caught in no man's land due to a combination of not knowing where to go with the play and what could have been a lack of communication between the two forwards. Aaron has failed to realize that he needed to trade off with Sutherby and cover Boedker.  It's possible that Sutherby on the ice has told Gagnon to switch off but the play is developing quite rapidly and while the mind can possibly figure out what's happening, the body doesn't have time to fully react.

To his credit, Whitney finds a gap and makes a perfect pass across the ice to a wide open Boedker who is staring at a yawning 6 by 4 net. 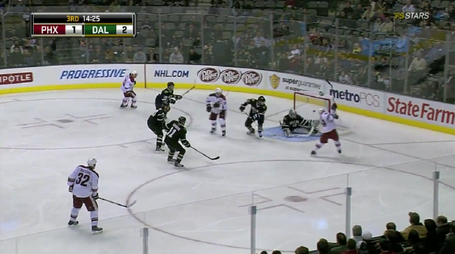 The moment the pass is made, Sutherby has probably realized his puck-chasing error and after failing to break up the pass had just started back across ice to cover the defensive responsibility he let go seconds earlier as the other three Stars forwards who were all caught staring at Whintey cutting in with the puck and flat-footed spin their heads quickly enough to just catch Boedker one-time a shot past a helpless Kari Lehtonen.

The total time it took from the point the Stars turned it over at center ice to the moment the puck flew past Lehtonen was a mere 12 seconds, illustrating just how fast things can happen on the ice. It also demonstrates just how important it is for players to make good decisions in the matter of seconds and how they need to communicate with each other.

Ralph Strangis on the call of this play describes it perfectly as the Stars being "carved up" and that's just what it was as not only the defensemen, but the forwards as well got caught chasing the puck and not sticking to the opposing players they should have been covering.

The Stars will hopefully learn a lesson from a play like this and get back to playing the better overall team defense they displayed no less than a month ago when plays would have been shutdown by a more alert five man group that covered the opposing players and didn't allow for one player to become so wide open and alone beside the Stars net.