I wanted to pass along some final thoughts on today's Dallas Stars news, then we can all move along and focus on the upcoming game against the San Jose Sharks tomorrow night. This is what happens when we have four days off between games -- we get all worked up with no where to go.

The news that Barch was traded came down at the exact same time as the Fistric suspension announcement and was lost in the shuffle a bit. Barch was traded to the Florida Panthers today, along with a 2012 6th round draft pick, in exchange for Jake Hauswirth and a 5th round pick in 2012. Hauswirth will never see time in the NHL so basically this was a swap of a 6th and 5th round pick.

Barch came to the Stars as a free agent in the summer of 2006. Originally drafted by Washington in 1998, Barch had never seen time above the AHL level before coming to Dallas and he immediately made it clear how he would earn his ice time. Perhaps most famous for his pitched battles against Brad May, some of which were epic fights that lasted for minutes, Barch was the guy on the team willing to drop his gloves and spark something for his teammates.

Unfortunately, he isn't the greatest fighter and while he was serviceable on the ice, it was going to be very hard for him to live up to the $1.675 million contract he got from the Stars last summer. He received less and less minutes and this season, with the Stars adding guys like Jake Dowell and Tomas Vincour becoming a regular, Barch just wasn't getting the minutes he wanted.

Joe Nieuwendyk hinted today that this trade was asked for by Barch, telling Mike Heika, "It was done quite frankly to accommodate Krys and his wishes to be a more regular player. He's been a good soldier and a warrior for us, but where we are going, he's not getting the minutes he wants. So this will hopefully help him."

There was speculation that the Stars did this trade to make room for Vincour once Burish was healthy, especially considering how no one wants to break up the Eric Nystrom line. In reality, this was likely more about giving a good guy in the locker room the chance to get minutes in the NHL with another team since he likely wasn't going to see many in the future with the Stars.

There's a chance that once everyone is healthy, Vincour heads back to the AHL. He still has many, many games before he has to go through waivers and he needs significant minutes, not 6 minutes a game on the fourth line.

It's sad to see a guy like Barch go, who always got a bit too much hate from Stars fans for only doing what he knew how to do best. He was a great guy to have in the locker room and was a stellar role model to have for the younger guys. It's said that when Benn first came to the NHL, he was put under Barch's wing so that he could learn what it took to be an NHL player.

Good luck in Florida, Mr. Barch. You've always been a friend of the site and we'll miss having you around.

Just like I knew it would, the decision to suspend Fistric for three games by Brenden Shanahan has been met with cries of outrage, frustration and anger by Dallas Stars. Even Mike Heika was left a bit speechless, saying "will never comment on a hit again, because I have no idea what the league is thinking."

I feel a bit of the same mind as Heika about this suspension.

My thoughts on this hit are well known. I did my best not to get into endless debate about it as I was more curious to see how the NHL and Shanahan would view it. I said that I would respect his decision in whatever punishment was or wasn't handed down and I do.

That doesn't mean I have to agree with it.

This hit has been dissected like the NHL version of the Zapruder film, with fans going frame by frame to determine at what moment Fistric actually left his feet, with physics calculations being applied to try and figure whether it was his own conscious momentum or whether it was natural momentum from the hit that made his feet leave the ice. Shanahan feels that while hits in hockey do naturally result in the skates leaving the ice, he felt in this case it was a bit excessive and fell under the NHL's charging rule and thus a three game suspension was warranted.

This is where my issue with the decision lies -- three games, for a hit where only charging is the issue but not a hit to the head. While Islanders fans will never say otherwise, it was clearly a violent shoulder-to-shoulder hit that unfortunately resulted in Niederreiter's head hitting the ice and resulting in a concussion. If a hit to the head were under question here, then I could understand the ruling.

When it's solely about charging -- and not even blatant "he launched himself straight up into the nostrils of his opponent" charging -- then I have trouble trying to determine why this was three games yet Jordin Tootoo only gets two, for throwing his elbows into a goaltender.

The underlying issue here is the fact that Nino Niederreiter - a young and extremely talented winger for the Islanders and a first-round pick - was concussed on the play. While a hit to the head was not discussed by Shanahan, I have no doubt that were Niederreiter just fine and did not hit his head on the ice, this play would not have been dissected like it was.

The NHL, and other sports leagues, talk the talk about cracking down on head injuries and dangerous hits to the head. The result of this is that hits that mainly result in injury -- and not those that do not -- are the ones that are most scrutinized. Take for example the Luke Schenn on Tomas Vincour hit; if Vincour had a) been a prized and skilled winger and b) had his jaw disolated by Schenn's elbow, I guarantee you that the NHL would have taken a good hard look at that hit.

Instead, Vincour was able to shake off the hit and come back a few shifts later. Is that because the hit was indeed legal or was it just luck that Vincour was not seriously injured? That doesn't make the hit any less legal in our eyes but right now, when so much focus is on head injuries, the NHL is going to crack down on hits that result in concussions.

I also feel that the onus needs to be on the other player as well. If Niederreiter had not had his eyes glued to the puck (something they teach you not to do in bantam) then I think he would have better braced himself for a hit he should have seen coming. It wasn't a blindside hit.

Technically, is Mark Fistric's hit charging? Yes. Without the officials calling it on the ice, I could understand a one-game suspension for making up for the no-call. Three games, however, is extraordinarily excessive, especially when considering the fact that not one time in Shanahan's explanation was a hit to the head or a high hit even mentioned. Instead, this was all about charging and the fact it took several slow motion replays just to determine how much and when he left his feet just sings to me "overkill".

It should be noted, however, that this is a season of the NHL setting precedence. Fistric is very likely a victim of that precedence and we cannot judge this hit and this suspension against those that have come in previous seasons.

But what does this mean for big hits in the NHL? Does this mean that players can continue to get away with not keeping their head up when charging along the boards through the neutral zone, since now it's illegal to place a big check in that situation. Does this mean that every exploding, big hockey check? Is the NHL really going to be that tough on big hits or only on the ones that result in injury?

Finally, I present to you this...not the Schenn on Vincour hit, but Jack Johnson destroying Mike Ribeiro. 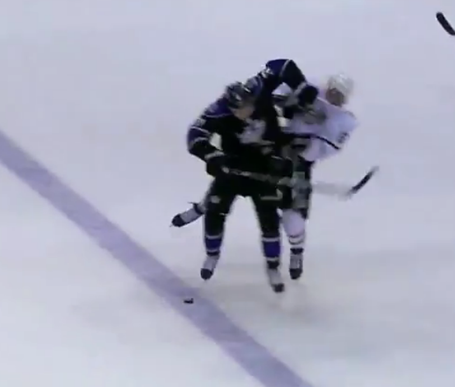 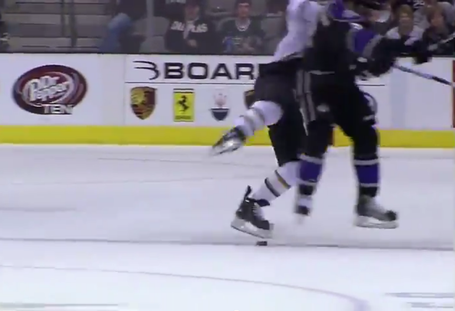 I wonder what would have happened if Ribeiro had suffered a concussion, and not been fine after feeling a bit woozy after the hit? This happens all the time in the NHL and I'm not saying there is some conspiracy against the Stars -- what I'm saying is that if the NHL is intent on punishing these types of hits then it needs to do so consistently and not wait for a concussion to make them actually take notice and do something.