OZ Coke Charts, And What They Tell Us About The 2012 Stars

Share All sharing options for: OZ Coke Charts, And What They Tell Us About The 2012 Stars

Ed note:You can click on all of the images to expand them. I probably should've mentioned that before. Sorry.

One key staple of the Glen Gulutzan system that the Stars are rolling with this season is that icing the puck is acceptable. This is fundamental contradiction to what we understand about how hockey is played, and how goals are both scored and prevented. There are several reasons for this which we'll dive into in a moment, but the main idea is that the Stars are willingly putting themselves in more difficult defensive situations by their willingness to ice the puck.. One tool that I'm going to use to illustrate this issue is known as an OZQoC (OZ Coke) chart. Bear with me while I explain what it is. It isn't overly complicated, but it can take a few minutes to detail.

The idea behind the chart is both simple and genius. The chart compares two stats I've used in this space this season to estimate ice time difficulty. The name is a two part abbreviation. OZ stands for Offensive Zone Start Percentage. QoC stands for Quality of Competition. Thus, the chart graphs Offensive Zone Start Percentage vs. Quality of Competition. The chart shows us how a given coach is utilizing his players. Several examples can be found across the interwebs. The version Rob Vollman uses at Arctic Ice Hockey and Hockey Prospectus and the version Derek Zona of Copper & Blue use can be viewed by clicking the links. The version I'm going with is a blatant rip off of one used at Broad Street Hockey. Below is what the Stars OZQoC chart looks like, and it's very cloudy. 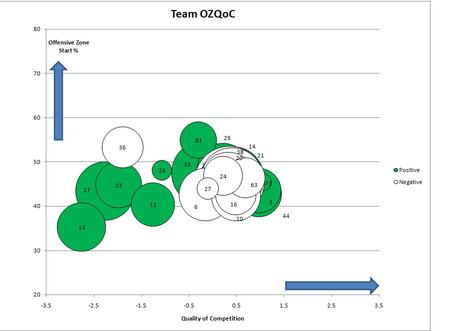 If you specifically look at the chart from Broad Street Hockey (or the other two examples, but tilt your head to the left) you'll notice the stark contrast between what the Flyers and Stars look like. The X-Axis for our two charts are flipped, but the point is the distribution. The Stars are bunched up in the middle while the Flyers are all over the map. The numbers indicate that the Stars rarely begin in the offensive zone, and more importantly, that most of the team routinely plays against difficult competition. The way the Stars system is set up is begging for goals to be given up. After the jump we'll try to figure out why.

***Advisory: If numbers or charts aren't your thing fear not...it isn't all numbers and charts after the jump. I promise.

Before we really begin let me fully explain the chart. I modeled the chart I made off of the one used at Broad Street Hockey because they added an element that I liked a lot. The size and color of the circle have as much significance as their location on the graph. They relate to the Corsi Relative of the player in question. First, the color. White refers to a negative Corsi Relative. In other words the player's Corsi (shots for minus shots against) is worse than the team average. Green refers to a positive Corsi Relative.. The size of the circle is relative to how far away from the team average the player's Corsi is. For instance, Alex Goligoski's giant green circle means that he's killing it. Adam Pardy's relatively small white circle means he's a small negative.

Since the Stars chart is such a pain I broke it into two charts. The first chart I've included is for the forwards alone. 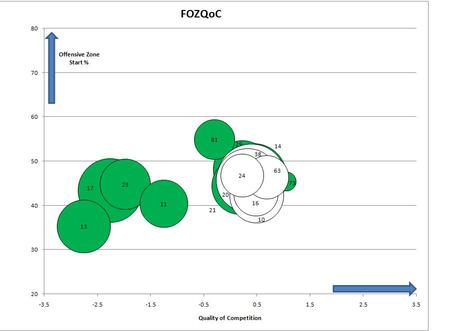 Does anything in particular stick out about the Stars forward chart at first glance? The striking thing about this chart to me is that the Stars fourth liners are all to the left (easier competition), and every other forward on the team is stuck in the middle. There isn't much real separation between the other three lines in terms of offensive zone start percentage or quality of competition.

One of the consequences of this is that Mike Ribeiro and Brenden Morrow, players not particularly known for their defense, have cumulatively played minutes that resemble a checking line more than an offensively skilled line. I think Ribeiro might be trending up due to where Tomas Vincour and Steve Ott are located, but nonetheless they've been in quite a few defensive situations you wouldn't immediately expect them to be in. 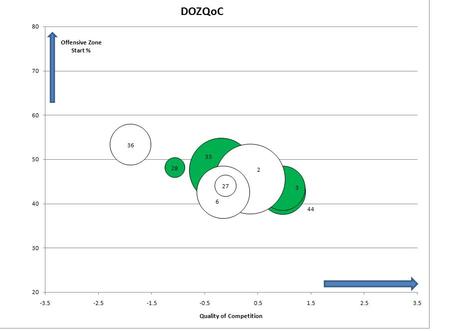 The defensive chart shows a similar result. All of the Stars defensemen are trending towards more difficult competition and more defensive zone starts than the NHL average. The notable exceptions are rookie Philip Larsen and Mark Fistric. Sheldon Souray and Stephane Robidas are the furthest to the bottom right meaning they are playing against tougher competition and taking more defensive zone draws. Despite those facts they've been the Stars best offensive defensemen this side of Alex Goligoski. The beating that Nicklas Grossman and Trevor Daley consistently take is also worth noting.

The question becomes why is this happening? Two solutions immediately come to mind. One is that Gulutzan is rolling his lines pretty consistently, but the ice time is split up enough to suggest that this isn't the case. The top two lines clearly get more ice time than the bottom two, and there exists a large separation between the bottom two lines. So, I don't think that holds much water. What does hold water is the Stars over zealousness to ice the puck when they get in any trouble. The Stars being allowed to ice the puck shows that Gulutzan is confident in the Stars ability to play solid defensive hockey, but it also consistently puts the Stars in perilous defensive situations.

The conceptual problems with icing the puck are numerous. First and foremost when you ice the puck you immediately give the opposition an offensive zone faceoff. Possession in the offensive zone leads to goals. The more opportunities you allow the opposition to gain possession in the offensive zone inevitably they will score more goals. If the team in question consistently wins faceoffs part of that problem can be negated, but unfortunately the Stars aren't a good faceoff team. They're currently 20th in the NHL this season, and they were 20th in the NHL last season.

The other two problems you inevitably run into are penalties and matchups. When you ice the puck the players on the ice for the icing are required to remain on ice for the ensuing defensive zone faceoff. These players will likely be tired from the previous long shift they took that ended with them icing the puck. The opposition can still put whoever they want on the ice so, naturally, they'll put their top offensive units on the ice as much as possible to exploit the tired players. Tired players on the ice against high quality competition leads to penalties. The Stars are among the most penalized teams in the NHL, and a good portion of those penalties are from Morrow, Souray, and Grossman. Those three guys have spent a ton of time in the defensive zone this season against good competition. That's a blueprint for penalties and goals against.

Steve Ott playing with Ribeiro helps fix part of the issue. Sure, he does take penalties, but he's a faceoff ace. If they ice the puck Ott can slide over to take the faceoff and give the Stars a chance to get out of the zone. Ott and Vincour are trending towards premium offensive space which suggests that they're taking Ribeiro with them, but the message is still loud and clear. The Stars have to stop icing the puck so much if they want to be a successful team. They're playing with fire, and they don't currently have the talent to overcome that forever

I have one final piece of information for you to drive the point home further. Below is a chart of the bottom 9 teams in average Offensive Zone Start %. I did a simple average of all players who have played 20 games, but removed Tampa Bay and Vancouver since they make serious efforts to play dedicated defensive and offensive lines. I compared the Offensive Zone Start % of the bottom 9 teams to their goal differentials.

What you have down here are one underachieving team, one very good team, three mediocre teams, and three bad teams. It should be noted that the three mediocre teams all have similar profiles. They have limited talent, rely heavily on their goaltender, and they hope they can make the playoffs. The Stars can make the playoffs though. They're more talented than either Minnesota or Nashville, but the extra zone time they give away by excessively icing the puck is putting them down with company they don't want. This is a correctable error, and if the Stars correct it they should be fine.