Just a few quick thoughts on something that has been on my mind for the past month or so, as we get ready for tonight's game against New York.

I played hockey in rec leagues growing up, played a lot of street hockey, played a lot of soccer as well. The one thing that was a constant, no matter what level I was playing at, was that to be successful offensively a team needed to be able to crash the net. Get to the front of the net and good things would happen, the saying supposedly goes.

While the Stars have done many things right this season and have played admirably well despite some tough injuries it frustrates me to know end as I see a team that constantly struggles with this basic tenant of hockey.

The Stars have a few "sniper" level players on the team but for the most part this is a hockey team that is going to have to score the tough goals and not the pretty ones. The goals that come from within a few feet of the net and are the result of hard work and tenacity. For a team that is struggling to score consistently, you'd think the Stars would simplify and funnel pucks and players to the net -- instead they keep to the perimeter and look for the perfect play, overthinking each offensive chance.

What's amazing is that the win against the Senators was the result of the Stars doing exactly what they needed to do. We take a quick look after the jump.

Here is a look at the game-tying goal by Radek Dvorak, off a perfect pass by Mike Ribeiro. 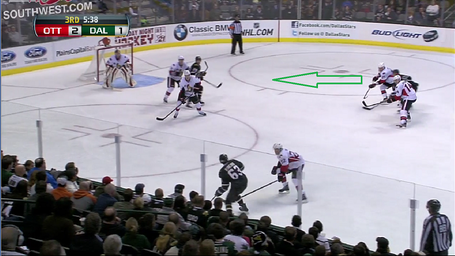 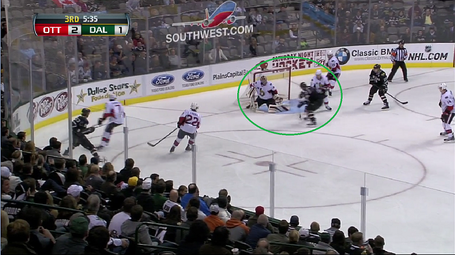 What really stands out to me about this goal is that this is the result of Ribeiro at his best; buying time with his skating along the board and then firing a perfect pass toward the crease.

What has been so frustrating this season is seeing so many centering passes just like that one, from the boards and behind the net, go straight into empty ice because the Stars failed to have a player in position to make a play. Too many times the Stars are not only not in the right place in front of the net, they aren't there at all -- it happened multiple times against Edmonton and it's become a trend this season that is very troubling.

What's amazing is that the Stars have three players on the team that should excel at doing just that. Steve Ott and Brenden Morrow have made a career out of scoring goals from just a few feet away, but this season have found frustration at times in their ability to do just that. Tomas Vincour has the size and tenacity to excel in this area as well but seems hesitant to plant himself in front.

It's not just about receiving those passes from Ribeiro or Jamie Benn, it's about putting yourself in position to score off of rebounds. It's a simple plan but one that continuously seems to stump this team -- which just builds frustration as the Stars are doing so many other things right.

Perhaps it's a matter of the system the Stars are playing and their attempt to not over-commit offensively and give up chances the other direction. Perhaps it's just not something they're focused on and I'm completely out of left field with this post.

Whatever the case, too many times this season we've seen passes sent to empty ice in front -- yet the biggest goals of the season have come from crashing the net.

It's a simple plan, really.