Share All sharing options for: Dallas Stars Once Again Show Importance Of A Complete Team Performance

On Monday night against the Anaheim Ducks, the Dallas Stars showcased why this team is starting to separate itself from others in the division and the conference -- including those teams with more talent, higher payrolls and bigger profiles.

With the Ducks afterwards extolling their struggles to play a complete game yet again, the Stars once more were talking about how complete, 60-minute efforts are what truly defines this team and how no matter what the score may be headed into the third period, they're going to give that final 20 minutes everything they have. It's what has propelled them to a 9-3-1 record when tied heading into the third, and it's also what has lead to their NHL-best record in one-goal games.

The important thing about this Ducks game was that the Stars were able to recover from yet another lackluster performance following a lengthy road trip. The last time the Stars returned from the road they fell apart in a 0-6 loss to Florida; against the Ducks, the Stars surrendered a three-goal lead before turning on the afterburners in the third period.

"People talk about that hangover that first game back from the road," Michael Ryder, scored the game-winning goal, said after the game. "We were a little slow out of the gates but we stuck with it, we got the lead. During the game momentum changes back and forth, they managed to tie the game, but we stuck with it. I think we had a great third period and came up with two points, which is huge." 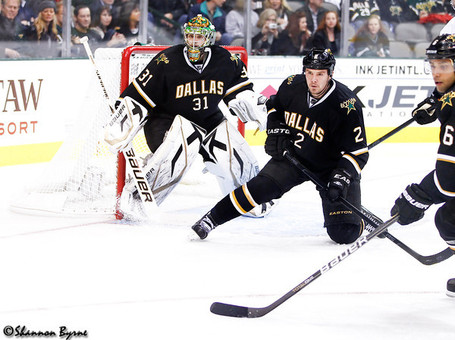 After a somewhat yawn-inspiring start to the game, the Stars were able to use the power play to get a big jump on the Anaheim Ducks. With their opponent playing a wholly undisciplined game for the most part, the Stars took advantage and scored two goals in less than 30 seconds -- one on a 5-on-3 and another pretty goal on the ensuing 5-on-4. The two goals gave the Stars a 3-0 lead and control of the game, but more importantly showed that the progress the Stars have been making with the man advantage is finally starting to pay off.

"It was real good," said Glen Gulutzan. "We had shots and net presence and on the other one we were putting pucks towards the net and you get bounces when you do that. Rather than holding onto it, which we do a little too long, we put stuff towards the net and we got rewarded."

The good feelings were brief, however, as the Ducks used their own power play to get right back in the game. The Stars' penalty killing had been near perfect over the past few weeks but against the Ducks broke down a bit, including a bad goal allowed by Richard Bachman when he cheated away from his post too much on a Teemu Selanne shot.

The Stars also allowed way too much traffic in front of Bachman, as the final two goals scored by the Ducks were off of deflections from long shots. While the first goal was certainly soft, it's tough to fault Bachman when there are multiple deflections from distance.

"We gave them a few chances on the power play, and that kind of swung the momentum," said Bachman. "We knew going into the third period if we could sustain some pressure in their end, things would go our way."

All of the talk after 40 minutes was about how the Stars had collapsed and allowed a struggling Ducks team to get right back into the game. After the way the Stars surrendered their lead against the Devils and then fell apart late in the game, it's no wonder there was concern the same thing would happen against a division rival -- at home, no less.

The Stars, however, regained their focus with a determination of playing a complete team game in the final 20 minutes, something Gulutzan said was talked about before the third period.

"Our message between the second and third was that we can't do it with a strike of lightning. We have to do it together, and the guys did that over the last 20," Gulutzan said.

With some great forecheck, textbook puck cycling and stifling defense, the Stars frustrated and dominated the Ducks in the third period. Outshooting Anaheim 16-9 in the final frame, the Stars took a two goal lead and never looked back, keeping the pressure high on the Ducks even in the final few minutes of the game. 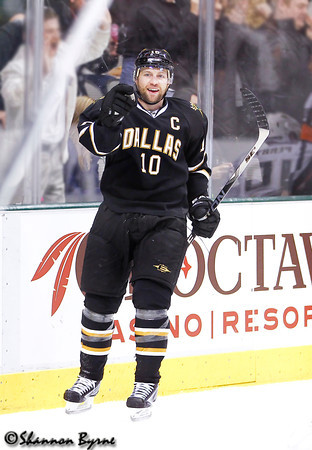 The effort was so good that the Ducks completely lost their cool at the end, taking several runs at Stars players as the final seconds ticked off the clock. It's always fun to watch a team fall apart like that, as the Stars celebrated another big win in front of an enthusiastic home crowd.

"If you aren't mentally tough enough to come back from that then you are in the wrong league," Brenden Morrow said. "We've been on the other side of it and we've been able to grind it out and pull it out. We've been in that position before. You just keep plugging away and believing in what you are doing is going to pay off. There are 60 minutes for a reason and the third period has usually been our best. We knew that and we're confident in it."

The Stars may not be the most talented team in the West, but they are proving to be one of the most resilient. The Stars have been able to pull off a number of wins with big performances in the third period and last night was no exception. The Stars are building some strong mental fortitude, even after surrendering a three-goal lead, and are hopefully back on the track of playing more consistently from game to game, without the need for late-game heroics.