If you've watched a Stars game at any point this season you've inevitably heard complaints about the Stars offense. The Stars aren't scoring at an appropriate rate to be taken seriously as a contender lately, and there is plenty of blame to go around. The Jamie Benn/Loui Eriksson duo hasn't been scoring lately. Steve Ott has gone dry. The bottom two lines aren't realistically expected to score on a nightly basis. And, most noticeably, the Mike Ribeiro/Brenden Morrow line hasn't contributed much offensively so far in 2011/12.

A lot of the focus lately has been on the Benn line's inability to produce, but all season long they've passed the eye test. They're still generating offense (albeit not as much as earlier this season) despite not scoring. The Ribeiro line hasn't generated much anything all season. There is a pretty convincing case to be made that the Ribeiro line has done quite a bit more harm than good this year which is something I didn't anticipate being a major problem prior to the year. So, in the case of Mike Ribeiro curiosity has gotten the best of me. In his time in Dallas he has proven to be a dynamic offensive player. <insert best Jerry Seinfeld voice> What's the deal with Mike Ribeiro?

I looked at five seasons worth of data in an effort to answer one seemingly simple question about Ribeiro. Is he in a slump or a long term decline?

Before we can fully attack the question of whether or not Ribeiro is in a slump we need to identify if there is actually a problem to address. Visually Ribeiro doesn't look significantly different. He looks like he is a little slower, but not so much to make him an ineffective player. Something is happening though. 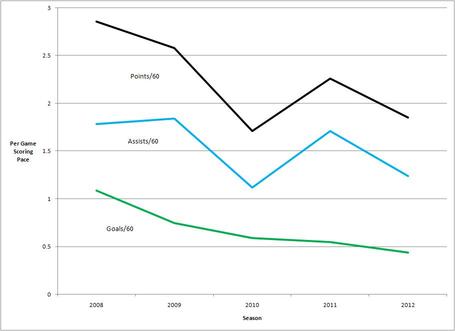 Since the 2008 season Ribeiro's offensive contributions have been trending lower. His assist (and therefore, his point) totals bounced around a little, but the ultimate trend is downward. Ribeiro's goal production has been going consistently down since 2008. That could be coincidental. Ribeiro was in the prime years of his career over that particular stretch of time so you wouldn't necessarily expect a major decline in production to have taken place, but a skills-related decline could have happened over that time period. From 2008 to 2011 the downward trend in production is obvious, but the severity of the drop from 2008 to 2012 is somewhat misleading.

Let's start with the 2008 season. Ribeiro's production took a major step forward. In 76 games he scored 27 goals, assisted on 56, and went from averaging 14 minutes a game to 18. The 2008/09 season came with the raised expectations that come following a career year. Ribeiro's production rates were artificially raised due to the emboldened numbers above. Ribeiro shot 25.2%, started 70% of his shifts in the offensive zone, and faced the lowest level of competition of his Stars career. He's been a very productive member of the Stars, but he was never the top notch goal scorer 2008 suggested.

Since 2008 Ribeiro has seen his shooting percentage drop every year. 2008's unreasonably high percentage was cut in half for 2009, and has slipped a little every season since. You'll notice that Ribeiro's shooting percentage has dropped to a paltry 5.3 percent this season. Shooting percentage tends to vary from year to year so Ribeiro's is likely to come up as the season goes along. But, when I saw his shooting percentage I immediately began reflecting on how his line has played this year. They haven't been driving the net much at all which would, intuitively, suggest that they're not generating secondary chances or getting consistent quality chances. Below is a graph of Ribeiro's Corsi Relative and shots per game in his career. 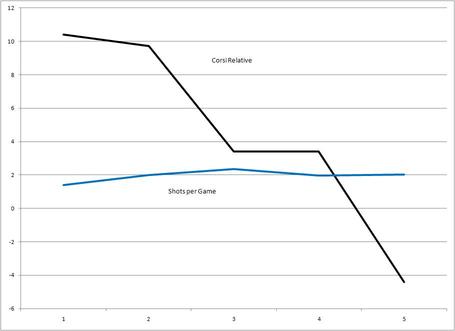 What sticks out here is that Ribeiro's shot per game total has remained consistent over the past 5 years while his Corsi Relative plummeted and his shooting percentage has dropped. The biggest decline in Ribeiro's Corsi Relative is from last year to this year, but his shots per game has remained stready. A Corsi Relative such as substantial as Ribeiro's suggests that his line is playing without the puck often. Ribeiro's zone start % says he's starting in the defensive zone more often than last year. Visually we've seen that the Ribeiro line hasn't been driving the net as much as usual. Yet, he's still generating the same number of shots per game with decreased results. I think it's entirely likely that Ribeiro is taking lower quality shots this season compared to last season, and that accounts for most of the difference.

Ultimately I think Mike Ribeiro is still the same player he has been in the past, but he might be a stride or two slower. He's nearing the end of his prime, and his production levels over the past five seasons do suggest that he's on a normal production curve. However, Ribeiro has never been an elite goal scorer. He needs people going to the net to get his points, and his line hasn't done that for most of the season. Morrow's return from the IR has seen a renewed drive for the net, and Ribeiro has six points in six games.

The world isn't ending. Ribeiro will be fine. Stay on the bandwagon.