The Dallas Stars remain mired in a bit of an offensive slump as their road trip shifts from one coast to the other. Even in their last four victories they have, not counting an empty-netter, scored an average of just 2.5 goals. Winning games in that fashion, if it's to be done consistently, puts a significant amount of pressure on a team's goaltender and defense.

Until the Jamie Benn and Mike Ribeiro lines get clicking again at even strength the team must be strong in other areas. The goaltending situation is a horse that has been beaten well past death lately, so let us speak instead of special teams, which hasn't been the Stars' strong suit this year. 15.4% on the power play and 83.3% on the penalty kill is the 35,000 foot view.

If we look closer we can see that things are getting better, however. The Stars are spending less time in the box, and more time with a man advantage, and it's having a big impact in helping Dallas survive this extended Kari Lehtonen-less, offensive slump of a holiday season.

Here, because we humans like pictures, is the number of times the Stars have been shorthanded per game in graph form. (There may not appear to be 28 data points due to the wavy nature of the thing but it's all here. Every game). 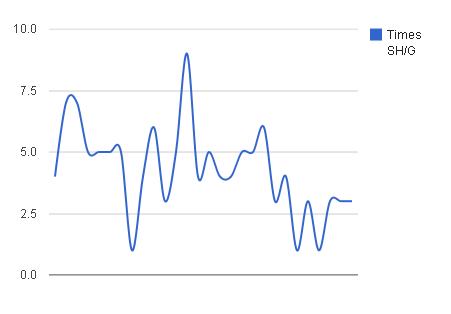 They were shorthanded six times in the game following Glen Gulutzan's blunt proclamation that they were going to "shut our mouths and play," (November 19th) but the numbers went down from there and have stayed down. In their last six outings the Stars have been shorthanded just 2.33 times per (1, 3, 1, 3, 3, 3).

Asking a penalty killing unit (that has been missing some bodies) to kill upwards of five a night or more (as the graph clearly shows) was not a recipe for success. Reduced sinning and greater restraint has paid off.

In the nine games since Gulutzan said that the stars have killed 25 of 27 penalties. 92.6%.

(If you're wondering what that massive spike is in the middle is: That was the game in Carolina where the Stars were officially shorthanded 9 times for over 11 minutes of game clock.)

The question of sustainability always comes up, and a team that employs passionate guys such as Brenden Morrow, Steve Ott, Adam Burish and Sheldon Souray is going to have its troubles from time to time. Truth be told, league average says you'll be shorthanded between 3.25 and 4.00 times per game, so their recent pace is not likely long for this world. The effort to be better is what's important going forward. It's not always going to work out in your favor.

"The first thing is discipline, so we don't have as many kills," associate coach Desjardins told Dallasstars.com. "I think that's been really big lately, we haven't killed as much and I think that helps us a lot."

Stephane Robidas offered some insight to dallasstars.com on their strategy when it comes to killing. "You try not to let them set up," said Robidas. "The best thing is to pressure them right away so they don't have time to set up, where they have to rim pucks and the puck stays on the wall and that's when you can get pressure and get the puck out."

Time spent shorthanded is only part of the equation. In talking about this Brandon and I mused it would be interesting to see what the special teams minute differential looks like lately in conjunction with taking fewer minor penalties, and the result, after much research, is another pretty picture trending in the right direction...

The Stars have been on the wrong side of zero for most of the season, meaning the other team has spent more time on the power play than they have. Again, all 28 data points are here. 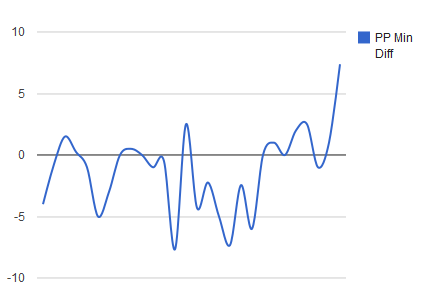 The exaggerated flourish at the end represents the absurd 13:11 the Stars spent on the job in Los Angeles late Saturday night. They accomplished their goal just once in seven tries and even allowed a short handed goal to boot, but that's besides the point we're making.

Taking fewer minors is a big reason for the uptick in positive power play time but drawing more minors is a factor as well, and they do that with puck possession. There was a stretch in there starting with the Penguins game, for example, where Dallas drew just 3, 2, 3 and 1 calls in four consecutive games. Contrast that with 4, 3, 4, 6 and 9 minors drawn in their last five.

In the Stars' case, even if they're not scoring, having more power play time limits opportunities the opposition has to tie a one-goal game, which is often times the difference on the scoreboard when Dallas is on their way to being victorious.

At any rate the uptick in positive special teams time is a welcome sight because even with it, the Stars rank dead last in the NHL with just 1:55:06 of power play time.