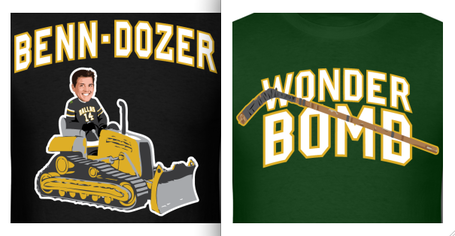 Dallas Stars Fans: Our friends at Dallas Cowshirts have been cooking up great ideas for t-shirts with local flavor featuring Texas Rangers, Dallas Mavericks and Dallas Cowboy inspired designs for a while, and now they've finally dipped their toe into the hockey market with these great offerings.

They've got great stuff at the American Airlines Center and Dr Pepper Star Center fan-shops, but for those of us who just can't get enough Dallas Stars themed gear this is another welcome outlet.

We asked for your ideas here in this post, and many of them are in their design process to be turned into t-shirts. These two are just the beginning, and we hope to see them churn out 8-10 designs when it's all said and done this season, and maybe more if the suggestions keep coming. Stay tuned to DBD for more.

Order shirts here at http://dallascowshirts.spreadshirt.com/ and wear them proudly around town.

After the jump it's down to the on-ice hockey business and morning links for your viewing pleasure...