This five day break to begin November has given Dallas Stars fans much to consider about the team's early success. Things like: Is it sustainable? How is it different than last year's early success? Or the year before that? Are they relying on Kari Lehtonen too much?

It's easy to look at the Stars 8-3-0 record from the outside and, if you've not been paying very close attention, say they've been good throughout. Even a small sample size of eleven games has produced a pretty noticeable dichotomous relationship between the early contests and later contests where "shots" and "chances" are concerned.

Though they're merely 2-2-0 in their last four, one could make the argument that they've been playing their best hockey as a team in that span. In other words, they've been steadily improving after a rocky start in which they did rely on Kari Lehtonen a bit much. Dallas Stars head coach Glen Gulutzan seems to agree.

"I think it's pretty successful. I certainly like our last six games better than our first five. That's a positive," Gulutzan said to local media recently. "You're going to get into these games where you get out-shot. You look at any team, any of the good teams, sometimes they get out-shot or maybe out-chanced but they find a way to win."

Gulutzan's team found a way to win several of those kinds of games early in the season but is slowly making it's way toward the right side of "out-chanced" and "out-shot" in the last two weeks, which should make their success more sustainable in the long term if it continues. For a team with so many new faces, not to mention a new coach, a new scheme, and a soon-to-be new owner, such progress is a most welcome sign.

As the club continues a stretch of eight of eleven games on the road after another home contest this Friday against the Colorado Avalanche, let's take a look at some of the metrics available to us in expressing these steps in the right direction....

Continued after the jump

If you like graphs and lengthy explanations, today is your lucky day. Lets' try to quantify how the Stars have been steadily improving as the young season has progressed... 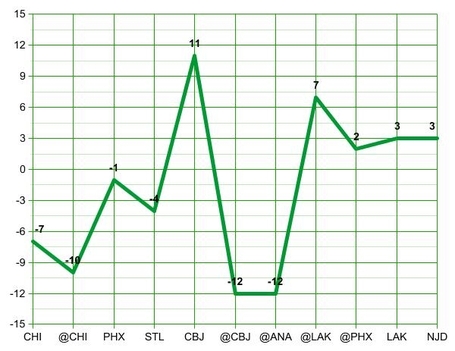 The scoring chance project is an unofficial venture by hockey nerds/purists to attempt to quantify the more quality opportunities a team has during a game. Not all shots are created equally, and this renders even CORSI numbers a little murky at times. We know teams keep their own scoring chance data. We've even heard Glen Gulutzan mention it a time or two this year. The Stars broadcast makes use of their own scoring chance stat as well. It's a little subjective, and it's not perfect, but it's been a great tool so far this year and backing up what our eyes are telling us.

Dallas started the year getting greatly out-chanced in preseason (though winning) and this carried over to October, seeing the Stars get out-chanced by 22 in their first four games en-route to a 3-1-0 record. We said "they can't keep doing this" and so did they. A terrible Columbus team allowed them to erase half of that number in 60 measly minutes before crushing them by 12 opportunities in their next meeting. The Ducks did likewise, despite a 3-1 margin if victory for Dallas.

The last four games is what we want to focus on because it shows the Stars on the right side of the line consistently for the first time this year.

Their 2-2 record in that period doesn't reflect the increase in the quality of their play. The Kings robbed them twice in what the Stars feel were pretty good efforts overall, but the Stars did likewise to the Coyotes. These things will even out over the course of the season, and it's by out-chancing your opponents more often than not that you'll come out on top in April.

As much as the Stars are improving, they still have some work to do... 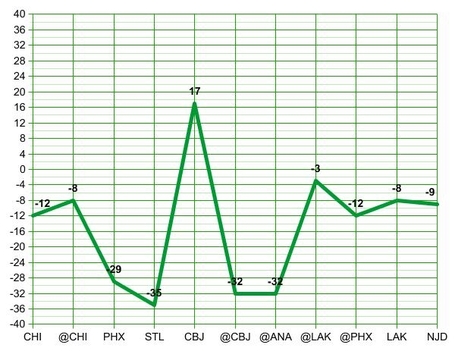 This graph follows the same curves as the scoring chance one does for the most part, though the weird deviation in scoring chances from total shots/pucks directed at the net in that first Phoenix game is a bit puzzling. Otherwise it shows that big spike against Columbus and ends on what is generally a high, illustrating that their last four games have been among their best efforts of the year, and certainly their most consistent stretch.

One thing that is a little different about this one is that the Stars have only thrown more rubber their opponents way one time. True, they've technically out-shot their opponents more often recently but this broader picture of [shots + goals + missed shots +shots that were blocked] helps us paint a picture of "possession" (so we like to think), and as we mentioned on the podcast this week, the Stars possession is still not nearly where they'd probably like it to be.

Some of that is still the disparity in special teams they're experiencing while going to the box too often, but much of it is 5-on-5/even strength play as well. It's also a by-product of the patient system Gulutzan has installed.

So while the Stars are starting to "out-chance" their opponents more often and have the puck on their sticks more, it's still a work in progress. As Mike Heika wrote earlier this week, how can a team with eight new players, a new coach, a new system, and one of the absolute lowest payrolls in the league be considered anything but a "work in progress" eleven games into a season?

The good news is that they're moving in the right direction. The question is if they can continue doing so on a tough four game trip coming up to Carolina, Washington, Pittsburgh and Detroit?