Dallas Stars Coach Glen Gulutzan On First NHL Win: "Now I know I can win one."

Share All sharing options for: Dallas Stars Coach Glen Gulutzan On First NHL Win: "Now I know I can win one."

Heading into last night's season opener against the Chicago Blackhawks -- a team many are expecting to contend for the Stanley Cup this season -- the biggest storyline revolved around new coach Glen Gulutzan and his NHL debut. The newest leader of the Dallas Stars from behind the bench had never even played an NHL game as a player, and his parents and family were in town last night for the occasion.

What Stars fans saw was a team that came into the game prepared and ready to play. For too long the Dallas Stars have fallen behind early in games due to slow starts or bad goaltending, but it's obvious that with Gulutzan the Stars will be a team that wants to dictate the pace of a game early. After a bit of a stumble in the second period the Stars recovered well and thanks to some stellar goaltending, Gulutzan was able to head home 1-0-0 as a coach in the NHL.

"It's a relief. Now I know I can win one," said Gulutzan after the game.

"I thought the guys played really good. I thought there's room for improvement for us, for sure, a few little things that we want to do better."

More from Gulutzan and the Stars, as well as further thoughts on the win after the jump...

This was my first time really getting a chance to sit and study the system that Gulutzan is building in Dallas. We've talked a lot about "scheme" and what that means to the Stars but the reality is this approach is vastly different than what we've seen the team play in the past. Gulutzan has preached starting with a strong defensive backbone and building upon that, saying that the team will be focused on limited chances while always looking to put the pressure on the opposition headed in the other direction.

For two out of three periods this system worked to near-perfection. When penalty trouble hit the Stars in the second period, they lost their balance a bit and the Blackhawks completely controlled the flow of the game. Thanks to Kari Lehtonen's brilliant performance the Stars walked away with a two-goal lead, but you could see how there will be some hiccups along the way with a new system.

For the most part, however, it worked. The Stars were using what I'm calling a "modified trap", a 1-3-1 base defense through the neutral that is designed to push the offensive transition to one side of the ice. This is to keep teams from getting set up heading into the zone and to protect against odd-man rushes -- something that hurt the Stars greatly last season.

"I think it has come together pretty quick," said Alex Goligoski. "Guys are on the same page with the way we want to play. For periods of time we did that tonight and there were other times where we didn't. That the way it goes. It's a learning process. It's a good first step. That's a good team over there." 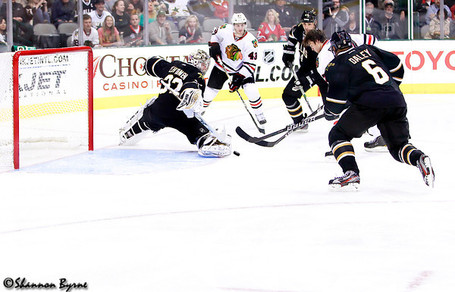 The Dallas Stars came just seconds away from a 2-0 shutout victory on home ice against a very good team, but it was obvious that there will be some growing pains and struggles at times this season. The Stars are still adjusting to a vastly different scheme under Gulutzan, both on defensive structure and on the power play, and against a good team like Chicago the cracks are going to show at times.

The good news is that the Stars had Kari Lehtonen between the pipes, who turned in an absolutely brilliant performance. With the Stars losing all control of puck possession in the second period, Lehtonen was a statue in net with several strong saves from in tight. In particular, Lehtonen flashed some lightning pad saves that is a testament to the conditioning work he's gone through this past summer. Lehtonen has always been one of the best goaltenders in the NHL moving laterally but not exactly the most athletic. That might not be the case any longer.

"He had a great performance, I thought he was the difference," Gulutzan added.  "Kari was our backbone tonight."

The Stars needed Lehtonen the most in the second when penalty trouble put them on the penalty kill three times in the middle frame. Lehtonen was able to control the rebounds and the flow of the penalty kill exceptionally well and was aided by a revamped kill unit that was perfect on the night. For a team that struggled mightily on special teams last season, this was a big step in the right direction.

"It was a tough task there," said Lehtonen. "But the penalty killing unit took most of the crazy chances away. It was a great battle. I was able to see the puck well tonight."

The penalty killing, aside from Lehtonen's performance, should be the story of the night. The Stars were aggressive at the top of the circles and were determined not to allow any easy plays for a very talented power play unit for the Blackhawks. What really stood out was how the Stars were constantly looking to create shorthanded chances in the other direction without compromising defensive integrity. This will keep teams on their toes a bit on the power play moving forward and could be the key for improving a massive issue from last season.

One word that Gulutzan loves to use is "pacey", as his focus as a coach is on the Stars being an energetic and aggressive team. He wants the Stars to control the flow of the game and dictate to the opposition, instead of sitting back and waiting. For many, hearing Gulutzan talk about defensive structure meant the Stars would resort back to "boring" hockey -- it's obvious that this is going to be a fun team to watch this season, as Gulutzan was his players attacking the net. 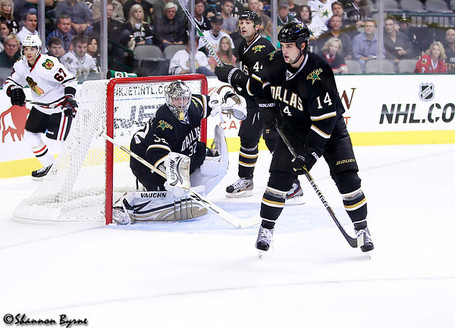 The schedule is also fortunate for the Stars, allowing them a tough test right off the bat against a very good Chicago Blackhawks team. Gulutzan has hinted that the Stars are trying to emulate the Blackhawks in some ways, as a team with stellar defense and an extremely potent offense. They are also an emotional and physical team, something the Stars are looking to be as well.

"These first few games are full of emotion and adrenaline and sometimes you can get away from your structure." Gulutzan said when asked about the Hawks. "Chicago's a hard team to play against in your home opener because they're so pacey and they're well-coached and they've got a lot of skill. The pace is the big thing and I thought we did a good job with it and we'll get better with it as we go."

It was not a perfect game for the Stars. Old habits die hard and the Stars fell into the same problems that plagued them last season, most notably an inability to get the puck out of the zone under heavy pressure. While there were certainly improvements, allowing a goal with just seconds left in the game because of the inability to clear the puck is something that was supposed to be fixed.

"We have to clean up some things defensively, and it’s basically on transition," Gulutzan said.  "I thought our forwards blew the zone a little bit tonight.  They’re a pinching team, so when teams pinch a lot, you have to be patient, you can’t cheat.  I thought we did a better job in the third."

More thoughts on the game:

** Gulutzan said he wants the Dallas Stars to be a deep, four-line team. He showed that on Friday night, playing the fourth line in critical minutes late in the game. He's showing trust in his players, something that will go a long way in the locker room.

** Tomas Vincour and Philip Larsen both looked a bit jumpy, a bit nervous at times in front of the home crowd. Vincour settled down and created some good offensive chances while Larsen showed off his cannon of a shot from the blue line. Larsen struggled with the size of the Hawks at times but overall played a decent game.

** Mark Fistric struggled badly in this game. His defense was below-par and while he'll never be an offensive force, he can't continue to turnover the puck at the blue line like he did on several occasions tonight. He was still a physical force however, credited with eight hits on the night.

** We haven't even mentioned Ryder yet, who was absolutely brilliant on the top line with Ribeiro and Morrow. That line is going to do great things this season, great things indeed.