The Tulsa Oilers and Wichita Thunder had other plans on this opening season of the Central Hockey League regular season.

A breakdown of last week's games as well as a look ahead after the jump.

Things just didn't start off right to the home opener. Less than a minute into the game, the Oilers seemingly scored a goal that was then waived off due to that whole "goalie interference" thing. Not to be swayed, the Oilers came out aggressive on the very next shift and scored a real goal at 1:11 into the first period. The Americans seemed sluggish at times, and had a hard time capturing the momentum back after that first goal. The Americans were also being outshot and outworked, going 0-for-5 on the powerplay. The one strength of the evening was the penalty kill, that killed 3 of 4 for the evening. The Oilers managed to score 4 unanswered goals before Jim McKenzie finally got a tally on the board for the Americans with less than two minutes to play in the third period. The Allen Americans fans were very raucous when the goal was scored, and showed the players that they were behind the team even if the scoreboard was not quite what they would have wanted for the evening.

Defending Big D was given the chance to pick the 3 Stars for the game, and they were:

Allen Americans Allow Wichita Thunder Back Into Game, Lose in SO 4-3

On the second half of a back-to-back, and after getting beat quite convincingly at home, the Allen Americans went on the road to take on the Wichita Thunder. This game started the exact opposite of the night before. The Americans scored 3 straight goals, and took a 3-0 lead into the beginning of the third period. After playing a fairly tight game, drawing only one penalty in the first 2 periods (and that for a too many men infraction), Allen got themselves into penalty trouble in the third period. They went shorthanded three times in the third frame, which allowed Wichita the momentum to even up the scoring. Neither team scored in the extra frame, and the game went to a shootout. It took a ridiculous 9 rounds of shooters before Wichita skated away with the win (and the extra point.)

The Americans (0-1-1, 1 point, 5th in the Berry Conference) will look to solve some of their miscues on defense this week as well as working to find the combinations that will find chemistry with one another to get consistent scoring out of the lineup. Admittedly, the Wichita game was a game that the Americans should have walked away from with the full two points, and it is to be expected that the Americans will come out a determined team in their next game after two very frustrating games on opening weekend. First up this weekend is the Texas Brahamas (0-1-0, 0 points, 7th in the Berry Conference). This team has yet to get a point on the season, and look to be a very determined team when they play in their barn on Friday night. Allen then heads once again to Wichita to face the Thunder (2-0-0, 4 points, 1st in the Berry Conference) and will seek to take the full two points this go-round.

There are several players on twitter for the Allen Americans, and many of them are great at interacting with the fans. They also post some of the most random happenings and occurrences in their everyday lives. Today's "random tweet award winner" comes from defensemen Tyler Ludwig, son of the Dallas Stars' beloved Craig Ludwig: 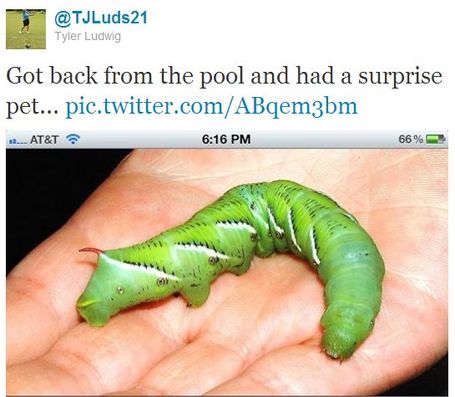