With the Texas Rangers all set to start the World Series tonight in St. Louis, Dallas Stars defenseman Sheldon Souray offered up a very apt comparison for just how important Kari Lehtonen has been to this hockey team through six games.

"If he was a baseball player, he'd probably be Nelson Cruz right now. He's making all of the difference in all of the games."

Let's just get the statistics out of the way first: With five starts under his belt, Lehtonen is leading the NHL in wins (5) and saves (172). In five games he's allowed just eight goals and is technically sixth in the NHL in goals-against average right now (1.58). The goalies ahead of him in GAA have all faced significantly less shots, with only Jonathan Quick having seen more than a hundred so far this season.

More impressively, Lehtonen is second in the NHL with a sparkling .953 save percentage, that was affected just a bit by allowing two goals on 15 shots on Saturday night. Right now, Lehtonen is facing the most shots per game of any goaltender in the NHL and yet he's standing tall, a confident force in net who is allowing the Stars to grow as a team under new coach Glen Gulutzan.

The Dallas Stars have some issues, but Lehtonen is giving this team the chance to learn from their mistakes while also winning games, when this team could just have easily been winless through six without him. 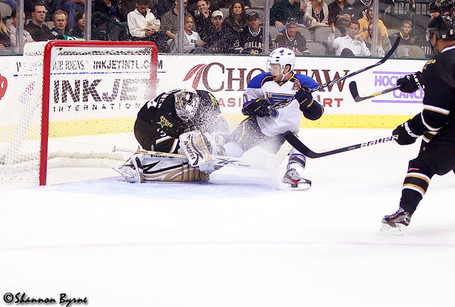 "I'm just trying to be patient," Lehtonen said after the 3-2 win over Columbus. "I think that's the biggest thing."

When the Dallas Stars traded for Lehtonen back in the spring of 2010, I did a big breakdown of his play over the course of his young career and what I found was a goaltender who was near-unbeatable when he was confident and on top of his game. He's aggressive and on top of his crease and he's letting the game come to him, staying patient and not overreacting to plays, maintaining his positioning while being able to swiftly move laterally.

When he struggled is when that confidence wavered and he started to move back in his crease and his glove hand would drop. We saw this happen in the middle of season last year and while it was far from disastrous play by Lehtonen, he was no longer able to carry the team like he had in the early part of that season.

This year the Stars are off to another good start thanks to the stellar play by Lehtonen, although you get the feeling he's feeling more confident than ever before.

Lehtonen's confidence and near-perfect play has given this team the chance to overcome some shortcomings in this young season. While there have been some very bright spots to be proud of, the Stars are struggling in some areas that would normally derail most teams leading to some ugly losses. Lehtonen has been solid yet spectacular at times and for the Stars, that's been the difference between losing and winning.

"He's making all the difference in the games right now," said Souray. "We've done some good things and put some stretches in periods together, but we've had some where we've sat back and take a lot of shots. When we have, he's made the saves and been the difference for us." 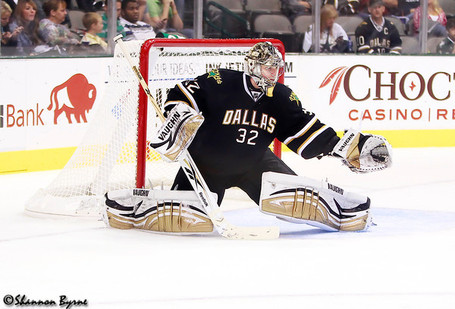 What's amazing about this start is that Lehtonen isn't having to make the acrobatic, amazing highlight-reel worthy saves. What he has shown is perfect positioning and the ability to limit second chances, which cuts down on the need for those big Sportscenter saves. That's not to say that he's not relying on his athleticism more than ever, because that is precisely why there is some thought that this start is not a fluke but a sign of things to come.

Lehtonen has always relied on his incredible mechanics and positioning as a goaltender; combined with his size, this has always created problems for shooters. This season, he's in the best shape of his life and has unofficially dropped 20-30 pounds since first coming to Dallas in February of last season. Now that his athleticism is the best it's ever been in his life, Lehtonen finally looks to be able to live up to that "elite" goaltender potential he's had ever since he was drafted by Atlanta.

His health has always been a question mark and even after last season, when he played in 69 games, there were some that still questioned whether he could remain healthy for an entire season. Many of his injuries have always been related to his conditioning and health and with it looking like that problem has been solved, there's no telling just how good he can be as a fit and healthy goaltender over the course of a full season.

Lehtonen hasn't been alone, however. Despite what the number of shots he's faced may indicate, Lehtonen has been aided by a much more stout defense in front of him. The odd-man rushes that plagued this team every game last season are now gone and the Stars have shown an increased focus on taking away the pass across the crease.

More impressively, these defensemen are doing an incredible job in front of Lehtonen in playing physical, boxing out the forwards and not allowing second chance shots on rebounds. Sheldon Souray acknowledged that the team is feeling very confident in Lehtonen and that's allowing them to do their jobs: take away the pass and let him see the shot.

The goaltender stands alone in the net but leave no doubt that it's a team effort in preventing goals. When a team isn't confident in their goaltender, you'll see more blocked shot attempts that lead to deflected goals or defensemen that forget to take away the pass and go after the shooter instead.

With the Stars, the ability of the defensemen in front has given Lehtonen even more confidence to step out and take on the shooter without worry of what's behind him.

"It makes me commit a little bit more to the guy with the puck because I know the guys are taking away the other guys, the passing lanes and the rebounds as well," Lehtonen said. "That helps tremendously."

So far, the Stars are once again off to a big start thanks to Kari Lehtonen. Last season, he wore down and when that happened the Stars began to struggle. While it's just five games, Lehtonen and this team are showing that the long-term prognosis for this high level of success is good; it's not just Lehtonen who is playing great, it's a team effort in front of him as well.

More importantly, he's the healthiest he's ever been and he's playing loose and confident. With Lehtonen and the Dallas Stars still improving and growing together, this is a very bad sign for the rest of the teams in the Pacific Division.