Share All sharing options for: Gulutzan Wants Stars To "Revisit Work Ethic On The Power Play"

"The power play, which I am in charge of, was atrocious," said Coach Glen Gulutzan following his Dallas Stars' 0/7 effort on the man advantage against Phoenix Monday night.

"I think we have to revisit it. We also have to revisit our work ethic on the power play, because we don’t win any battles. I’ll take some responsibility now, but if this keeps going… we’ve got to battle to win. We can’t get outworked 5 on 4."

Last season we wrote about the sputtering power play here, here, here, here and here. Those are just the discussions in the second half of 2010-2011 after the New Year. The road power play in particular received even more attention before that.

The power play problems were significant under Marc Crawford because the way they went about trying to win hockey games demanded more offense however they could get it, and because the penalty kill struggles last season needed an offset.

Under Glen Gulutzan the demand for power play proficiency could possibly be even greater. Low scoring, "bend but don't break" hockey seems to be on the menu through three games here, and that patient, sometimes defensive style means offensive pressure will be hard to come by a lot of nights. Add the loss of Brad Richards, which despite a 2-1-0 record should not be undersold by any means, and what you get is a team that will need to generate a higher percentage of it's offense from 5-on-4 play.

Think 2006-2007 when the offensively challenged Stars scored 35.5% of their goals on the power play. Contrast that with just 25.2% of their goals a season ago. With only one power play goal scored on their first fourteen opportunities, they have nowhere to go but up.

After the jump let's talk about what Gulutzan sees as their way forward on the job and how they scored that lone PP tally...

The night Gulutzan said that the Stars had actually won 8 of 12 power play faceoffs against the Coyotes, but went 1 of 5 and 1 of 8 in the other two games, giving them a total of 10/25 = 40% through three games, and that's not nearly good enough.

Faceoffs aside, when a coach is talking three games in about getting "outworked", mentioning "work ethic" and using the word "atrocious", it's almost as alarming as it is refreshing in it's candidness.

The power play, through this admittedly extremely small sample size of three games, seems to want to enter the zone largely through a dump and chase game. Against Phoenix, Mike Smith used a trick learned here in our fair burgh from a man named Marty Turco to negate dump ins time and time again. It's a tool that Dave Tippett is no doubt glad to have returned to his bag of tricks and it was frustrating for all parties on Monday night to see.

Phoenix used extremely aggressive penalty killing throughout be it with Smith's puck movement, stacking the blue line with three or even all four bodies to deny entry, or with a tenacious over-pursuit of the puck that Dallas would have liked to have taken advantage of a time or two. (You can thank Game Center Live blackout restrictions for a lack of screen caps from that game...)

From the game in Chicago, let's see the kinds of battles Gulutzan wants his players to win after a dump in... 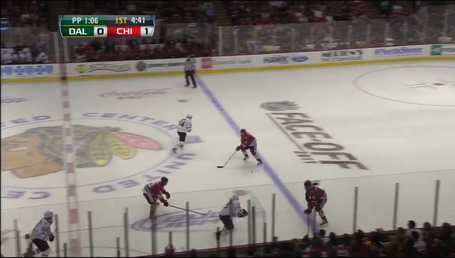 The puck carrier approaches the blue line on the right wing, and with the Blachawks standing firm at the blue line, dumps the the puck into the far corner. 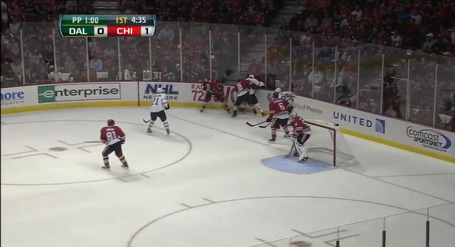 The battle ensues in the corner but barely six seconds later there are already more Chicago players surrounding the puck than Dallas players. 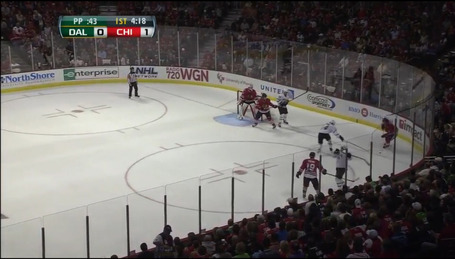 A full 17 seconds later the puck has been battled for along the boards into the other corner, and Duncan Keith comes up with it (it's on his stick there, you might not be able to tell) and he clears it. From the dump in at 1:06 to the next attempt the Stars make to enter the zone with about 25 seconds remaining after a line change, a big chunk of the power play is gone from one failed dump attempt.

We go to the third period power play in which they scored their lone PP goal this season... 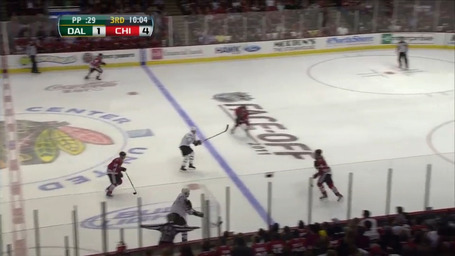 The point of entry is the exact same. The Blackhawks are on the blue line just like they were last time. Only two Stars are visible on screen. The puck is dumped in the same manner around the boards to the far corner. 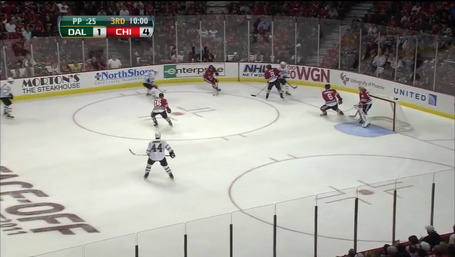 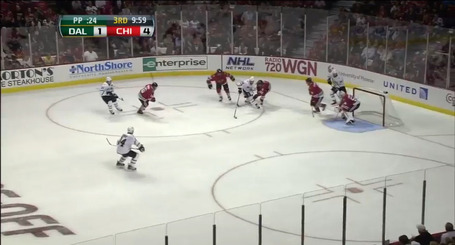 Benn takes the puck away, is seen here between two Hawk defenders merely one second later and they're soon scrambling. Benn passes the puck to Souray at the point, who rifles a shot that Steve Ott (just below the goal line here) tips home.

The success of both of these power plays is entirely predicated on winning a puck battle after a dump in. Simple dump and chase. Hockey 101. When they attempted to carry the puck into the zone it was generally a mess, and as Gulutzan said they "seemed out of sync."

Last year we spent much of our time talking about the power play's short comings once it was "set up". So far this year they haven't spent much time set up and the entries (and ensuing puck battles) are the current stumbling block. Keep an eye out this weekend against St. Louis and Columbus to see if the Stars continue the dump and chase game (to address the work ethic) on the PP or if they devise some methods to maintain possession across the blue line (and therefore address the scheme as well).

"Scoring chances" on the power play through three games: (Compiled by Josh)

For a refresher on the scoring chance project in which we're participating this year click here.