"Unbelievable," Dallas Star coach Glen Gulutzan said of Kari Lehtonen, after his Stars enjoyed an improbable shootout victory over the Phoenix Coyotes. "He's the reason we have two points."

Make no mistake about it, Kari Lehtonen is the reason the Dallas Stars have won two games this season. While the Stars certainly had their moments against Chicago on opening night that game, like the near-fiasco we witnessed on Monday evening, could have ended much differently had the Stars not had a red-hot goaltender in net. Lehtonen has been miraculous at times, making incredible saves look routine while facing a barrage of shots.

Just three games into the season there's already talk of whether the Stars could find their way into the postseason because of Lehtonen's play in net. While talking about the playoffs right now now is ridiculous, there's certainly some merit to the thought that with a team like Dallas they're going to need the goaltender to put together one incredible season. The Stars right now just don't have the playmaking ability to keep up with the better teams in the West -- the good news is that a goaltender with Lehtonen's potential is the great equalizer on the ice.

Kari Lehtonen is looking incredible (more on him tomorrow) but the Dallas Stars are struggling as a team. This is something we didn't expect with new coach Gulutzan, at least in the effort department. The good news is that Gulutzan isn't painting a pretty picture or making excuses; he knows things are bad and they need to change -- fast. 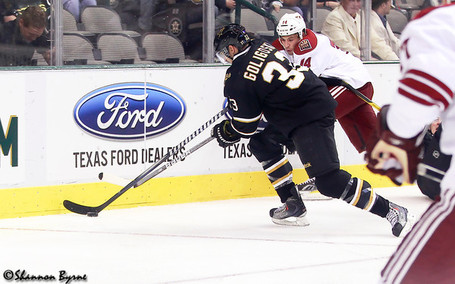 There's plenty of talk this morning about how Lehtonen's play has led the Stars to two big wins but much of the focus is going to turn to the play of the team in front of him. The Stars, aside from a very well-executed third period on opening night -- have looked hapless and incapable for most of three games. Sloppy play, poor execution and an overall lack of energy has us wondering what happened to the aggressive team we watched in the preseason.

The Dallas Stars scored at well over three goals a game in the preseason, absolutely hammering a few teams at times while showcasing an aggressive forecheck and effective transition game. This had many of us thinking that the concerns of "boring" or "lack of offense" were unfounded and that Gulutzan has this team well on the right track before the season started. Couple that with an obviously-sharp Kari Lehtonen, and there's no wonder some of us were feeling optimistic.

Now three games into the season, the Stars have scored just five goals. None of these goals have come from the supposed "top line" of Michael Ryder, Mike Ribeiro and Brenden Morrow. The most effective players for the Stars so far this season have been the guys on the third line, Vernon Fiddler and Radek Dvorak. Those two are the only players with a consistently aggressive and smart approach and while it's great to see them doing so well, the Stars desperately need others to step up as well.

After the game last night, Coach Gulutzan stepped in front of the media and admitted the Stars were not living up to his expectations. For many of us, who are watching this team and seeing exactly what is going wrong, it was refreshing to hear and see such an honest appraisal of his team's performance by the young coach.

"I'd say we've got a lot of work to do. I think our habits need to improve. We have to have the ability to play a game that when people watch they go, 'I know what these guys are all about.' Quite frankly, we aren't there yet," said Gulutzan.

The crux of the issue right now is hard work. The Stars are losing the battles along the boards, they aren't dictating the pace of play and there are far too many turnovers right now for the Stars to find success on offense. The only way the Stars are getting consistent production right now if off the stick of Sheldon Souray, who still has that deadly blast from the point.

"I thought we worked very hard on the PK, I thought we did a real good job," Gulutzan said later. "I thought Kari [Lehtonen] was real good. But the rest of our game needs some work. Our power play, which I am in charge of, was atrocious."

It wasn't all bad. The Stars have shown incredible improvement on the penalty killing unit, something that hurt them badly last season. While a lot of focus has been on the Stars allowing a high amount of shots, Gulutzan's scheme is built to push everything to the perimeter and cut down on high-quality chances -- not exactly on the amount of shots taken. 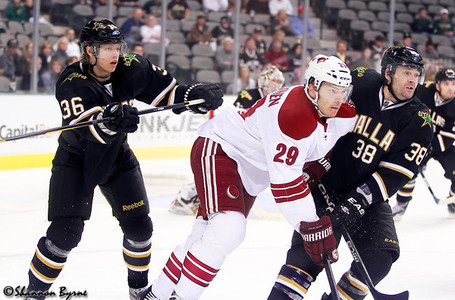 A few of the goals allowed by Andrew Raycroft on Saturday night were of this outside variety, something that visibly shook the Stars on the bench. With Lehtonen, the goaltending has been superb and it's covered up for the many shortcomings on the team so far in the young season.

We'll have more on the power play later today, but Gulutzan spent some time laying out the issues with that particular aspect of the game. Everytime the Stars went on the power play they struggled and it seemed to suck whatever life there was out of that arena and out of the team. The frustrations with the extra man bled over to even-strength play and the Stars struggled with creating any sort of actual offensive cohesion from line to line.

There's been a lot of talk about how Gulutzan is able to win with less-than-ideal talent -- a good reason he was hired in the first place. Right now the Stars have to approach these games that while they may not be as talented as others, they'll be the hardest working team on the ice and that is how they'll win. We've seen it time and again in sports where work ethic and aggression can out-duel talent any day.

The Stars -- once again -- are also lucky to have Lehtonen in their net.

"He's the reason why we have two points tonight," coach Glen Gulutzan said Lehtonen. "At the end of the day, you can't have this every night, because it won't go."

This is the key to moving forward. Coach Gulutzan was frank and honest last night after the game about his teams struggles and he acknowledged that they absolutely cannot rely on Lehtonen every game to bail out a struggling team and to hope for some points. This isn't the type of team the Stars are being built to become and it's not the type of team that Gulutzan is coaching.

Publicly admitting the problems and calling out his team for lack of effort is a good sign that this coach knows what needs to be done. He knows the problems are there and he's stated in public what is going to have to happen for the Stars to be successful. In the past, we might have heard nothing but praise for Lehtonen or redirected answers that focused on the positives and not the negatives.

Sure, the Stars were able to walk away with their second win in three games but I have a feeling that most Stars fans realize that this sort of effort and play won't be able to cut it for much longer. The Stars haven't had a coach that would publicly call them out since Dave Tippett and it had a a way of working back then as well.

Coach Gulutzan talked the talk last night after the game, something that has impressed many in the media and the fans that heard it. Now we'll see how the team responds and if Gulutzan can get this ship turned around before it wanders too far off course.