[Ed. Note: With no broadcast for the game today, there will be no game thread.]

Racing for the puck on an icing call with Eric Nystrom of the Minnesota Wild, Fedun's skate got caught on Nystrom's stick and he crashed hard into the end boards -- shattering his femur. Fedun spent the night in the hospital and there are reports that he had emergency surgery last night on his right leg, possibly involving the insertion of a metal rod.

Of course, today sees debate exploding across the hockey world in response to this tragic injury as icing once more becomes a hot topic of conversation. There are calls that the NHL should immediately remove the icing rule and go to at least the "hybrid" icing that was experimented with this summer or to go to the no-touch icing that is used in international tournaments and in Europe.

What's unfortunate is that this injury could have been prevented. Three years ago, Kurtis Foster broke his femur while racing for the puck and this debate was had back then. Instead of taking the necessary precautions and making the rule changes needed, the NHL decided to alter the rule just a bit and add some punishment for playing the body on such a play.

First, here's the video of the incident:

If Eric Nystrom is guilty of anything, it's of trying to play the puck and getting his stick caught up in Fedun's skate. It's something that is a risk on every single one of these plays and the way Nystrom is going for the puck is exactly how every player always approaches icings anyway -- by trying to reach around with his stick.

According to the Globe & Mail, Nystrom is feeling extreme guilt over the accident that injured Fedun:

"I feel awful," Nystrom said. "He was really hurt and I had obviously no intention of ever, ever doing anything like that. I was just racing for an icing and that's one of those freak things that happens in those situations and it's why people always say that rule (should be changed to no-touch icing). If I didn't think I had a legit chance at the puck I would have never raced in there but I just thought I had a good jump and I could maybe get in there. ... I feel terrible. So bad right now."

Unfortunately, Nystrom's bad night got worse after that. He is, like many players, very active on Twitter and to his credit he answered for himself when fans took to social media to lay their anger at his feet. Puck Daddy has a run down of some of the responses Nystrom received from fans: 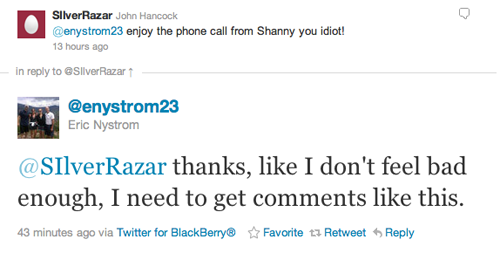 There are many, many more like this and what's sad is seeing how the anger from fans is completely misguided. Don't take out your frustration on Nystrom, who was just trying to play the game according to the rules and got perhaps a bit too aggressive with his hockey stick. Instead, get angry with the NHL -- who had a chance at avoiding injuries like this in the future when the exact same injury occurred three years ago.

This has been an hot issue for a while now, as the NHL is the only league on multiple levels that allows touch icing. The play is so dangerous that icing has been amended on nearly every level of hockey so as to avoid injuries like this. What's most frustrating is that the players aren't exactly worried about the "traditional" hockey plays being taken out of the game -- they want the rules to allow for safe play as well.

The NHL has been slow to act on player safety issues for too long -- and once again it's going to take a catastrophic injury for the league to react.

The past few seasons, head shots were the big issue and the NHL was hesitant to change the rules with the fear of making hockey too "wimpy" and taking the physicality out of the big hits that the sport is known for. Unfortunately, with research now showing us just how dangerous these head injuries can be, the NHL took too much time in doing anything drastic with the rules.

A devastating hit by Matt Cooke wasn't enough to completely change the rules to create a deterrent for players and after a season filled with concussion issues to star players -- like the league's best and most popular player -- the NHL finally decided to react. This season, Brenden Shanahan is handing out hefty suspensions in a heavy-handed method of sending messages to the players that these hits won't be tolerated.

This is all well and good, but those changes should have been made two years ago. It took a major injury to Sidney Crosby to cause the NHL to actually take action.

Now, we have yet another player whose career is in jeopardy because of a shattered leg that occurred while chasing after an iced puck. The NHL didn't do enough three years ago when the same injury occurred and now it's happened all over again.

Perhaps the NHL will learn its lesson this time.