And again, we'll reference back to that infamous post on December 13th that bemoaned the Stars lack of success on the road in the Western Conference. At that time, they stood with a mark of just 1-5-1, had been outscored 25-12.

What's worse is they had only scored 2 power play goals in those first 7 Western Conference road games.

After last night's impressive 4-2 over the Chicago Blackhawks, the Stars have now reeled off six wins in a row away from the American Airlines Center. And not surprisingly, the infamous graphs below the jump give us a reason why the Stars have finally found success on the road in the West.

First, let's take a look at how bad specials had fallen for the Stars in their first 7 West road games. 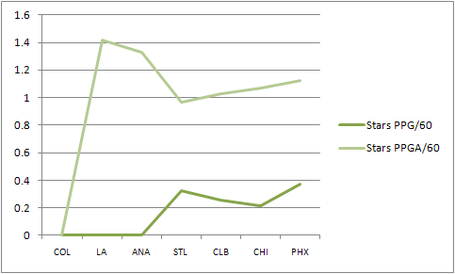 Obviously, the Stars lack of success on the power play has been well chronicled. But the special teams also had issues of their own, surrendering power play goals in 5 of the first 7 games.

And the only reason they still weren't stuck on one power play goal after their first 7 West road games was because of a garbage time power play goal by Loui Eriksson with 2:24 left in the game against Phoenix on December 11th.

The even strength stats weren't pretty, either. 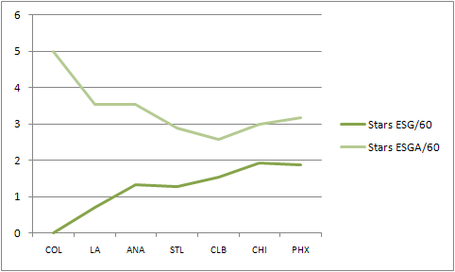 The 5 spot that Colorado hung on Dallas back on November 6th skews this results just a little bit as the Avs scored 4 even strength goals in 48 minutes of even strength play that night.

The graph did regress back to the norm as we got to road game 7 of the season. But it still wasn't pretty.

So what changed to allow Dallas to reel off six straight on the road? 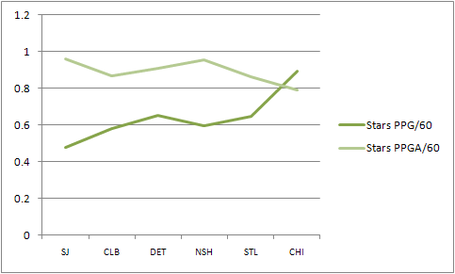 Well, they started scoring on the power play for one.

After getting stuck on two goals through the first seven road games, the Stars have scored nine power play goals during their six game winning streak, including going 3 for 3 against Chicago on January 5th.

And they've also improved on the penalty kill, only allowing three power play goals against.

As for even strength play... 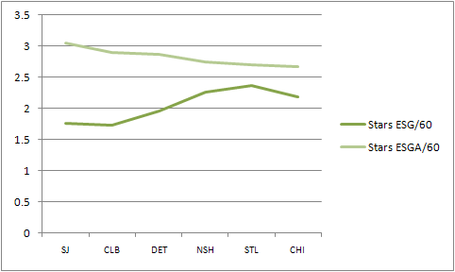 It's that the gulf between the two has narrowed significantly and that the goals against in both even strength and penalty killing has been trending downward during the streak.

The streak itself is nice. But what's more impressive to me is how the Stars defensive game has gotten better.

In their last three road games against Nashville, St. Louis, and Chicago, the Stars have never trailed at any point in the game (though they came within two posts and a cross bar on Viktor Stalberg's penalty shot the other night).

The streak will end at some point because that's just the way hockey go. But the habits of scoring first and not playing from behind should give Dallas the blueprint it needs to win a lot more road games this season.