With the battle won tonight and everyone in Stars-land feeling good, Craig Ludwig and John Radigan took a little matter of national pride and gamesmanship into their own hands late Wednesday when speaking with Darryl "Razor and uber Canadian" Reaugh.

Razor had somberly and sincerely (#sarcasm) congratulated the Americans during the pre-game show on their bronze medal and victory over Sweden in the afternoon along side Steve Ott, who bet Adam Burish Canada would win gold.

The bet seemed a sure thing at 3-0 Canada in the 3rd, but unless you were living under a hockey rock, you know that Russia scored five unanswered goals to stun Canada. And presumably Razor.

The resourceful Radigan and Ludwig donned what Russian paraphernalia they could find to taunt Mr. Reaugh, who pleaded innocence and remarked that silver still seemed better to him than bronze.

Fair enough, and yet because of how serious Canada takes this and how much the U.S. seems to just not care, it felt like the studio crew had the last laugh.

(The moral: It's fun what you can do when the Stars are winning like this, and the Stars on-air talent is willing to go this extra mile for the sake of the show. Awesome.) 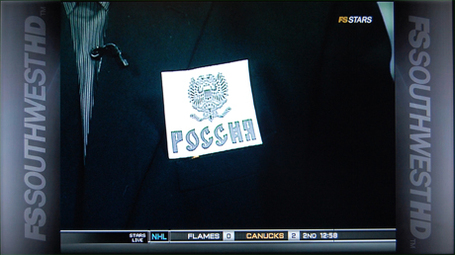