Can The Dallas Stars Hang On To Pacific Division Lead?

Share All sharing options for: Can The Dallas Stars Hang On To Pacific Division Lead?

More importantly, we thought the Sharks and the Kings would be on top of the West shining their California countenance's down upon the rest of the Pacific Division, and if the Stars were to somehow squeeze into the playoffs, it would take Phoenix and Anaheim getting the heck out of the way and falling off the map, so to speak.

Sharks fans and Kings fans alike are writing posts trying to rationalize how their teams will snag the 8 seed and the Coyotes are licking their (excuse me, terrible accidental pun) chops thinking they can catch the Stars. Then there's the Ducks who have played something like 74 games of their schedule already but are even closer than Phoenix is to claiming the division.

Oh, and there's Dallas, sitting on top of the Pacific. Right where everyone thought they'd be.

It's the only division in hockey you can't look over and pick one or two teams that are completely out of the race. Indeed, there are even national media types unwavering in their expectations of the Sharks and Kings as recently as last night...

I figure both Kings and Sharks end up making the playoffs. So who comes out? -Pierre LeBrun

Anyone's first answer to that question would have to be "2 Pacific Division teams" because divisions seldom send 4 teams to the playoffs. (It used to happen a lot in the East but it was due to the collective incompetence of the Southeast Division. No longer.) The Pacific hasn't sent 4 teams to the playoffs since the 1999-2000 season.

So who will be on the outside looking in? 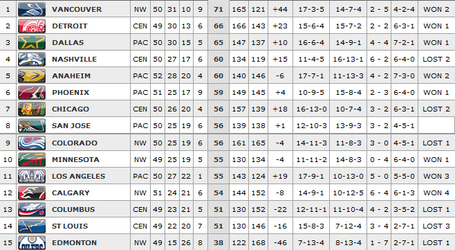 At some point this season we had written off Minnesota, Anaheim and Calgary. Whoops.

The Kings recently blew an eight game home stand with a record of 2-6 but have won three straight and put themselves back within a point of 7th place. They'll take their road record of 10-13-0 out for a nice 10 game stretch away from home (they're calling it the Grammy's/NBA All Star road trip) and that could be their undoing. Remarkably that sojourn does not include a Dallas home date. The Stars will have three more shots at keeping them down and out of it.

The Sharks are one of only two teams in the top 12 to have a sub .500 record in their last 10 games. Their goaltending has been sporadic and that has caused confidence issues to radiate through the team. They have had an issue with holding third period leads this year, as Fear the Fin is constantly remind everyone, and they've scored the fewest goals in the division somehow with that glut of talent at forward. Their fans are praying for a move at the deadline that brings defensive help. They've lost more games at home than they've won.

The Coyotes have Ilya Bryzgalov. Ordinarily I'd stop there and complain about their style of play. It will get you into the playoffs but it won't do anything for you once you're there, etc, etc. Except the Coyotes have scored the MOST goals in the Pacific Division. Somehow. This has allowed them to stay close to Dallas through what we thought was an awesome January. Can't shake those desert dogs, however. The remaining three head to head matchups are key here.

Anaheim. Jonas Hiller is using his jedi powers to steal games for the Ducks on a nightly basis. They've been without Ryan Getzlaf since the end of December and have actually made up ground. They weren't supposed to be in the mix this year with so many changes on the blue line but Hiller, Ryan, and a seemingly ageless Selanne have kept them firmly in it. We can't even point to how many games they've played any more because their points percentage is legit.

So who stays home? You know that old poker saying that if you can't spot the sucker at the table in the first 30 minutes...you're the sucker? Dallas needs to be careful here. Nine games in March are against Pacific Division opponents and as the Sharks and Kings can tell you, a sudden and massive downturn can happen at any time out of the blue.

The Stars are on top now and can stay there if they take care of this business, but a 5-6-1 record against their divisional foes needs improvement and they only have one such game in February: Phoenix, on the 9th. Then comes the onslaught in March.

Until then the Stars have the odd distinction of leading their division without really having done any damage within it.