As I was watching the game last night, I knew something was off. Andrew Raycroft's performance this season has been nothing sort of brilliant, yet the Calgary Flames still ended up with seven goals on the scoreboard yesterday. I found myself asking why that was.

The easy answer would be "Every goalie has a bad game," or "It was just bad juck," or "The numbers don't matter."

Well, we here at DBD don't settle for easy answers. And I have no life lots of free time. So I went through the video of the game, and I've come up with a screenshot-by-screenshot analysis of all of the Flame's goals last night. Follow the jump to get started.... 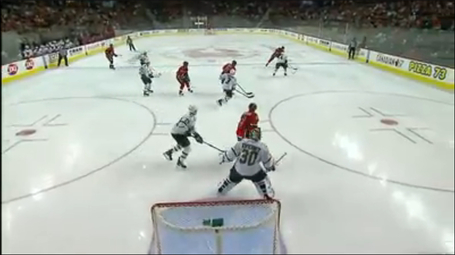 The first Flames score was set up as a simple possession: get a man in front of the net and sling pucks towards him. Or, at least that seemed to be on Robin Regehr's mind. His first slingshot from the point was blocked aside, so Alex Tanguay carried the puck back up the left side of the boards, passing it back to Jay Boumeester, who gave it right back to Regehr at the blueline. Keep an eye on the Flame in the middle of the screen: That's Tanguay, with Ribeiro trailing him. 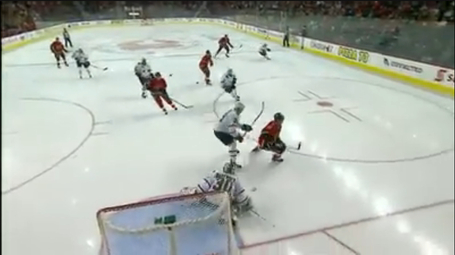 Regehr shot the puck in on net. You can see here that Tanguay has completely left Ribs behind him, because Ribeiro was slow to keep up with his man. Meanwhile, Raycroft blocked the shot aside. Only one problem: the rebound bounced to the right side of the net, where Brendan Morrison just happened to be sliding to. 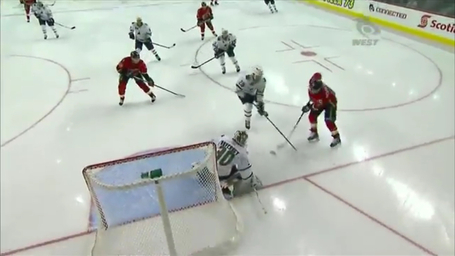 The puck bounced onto Morrison's stick. Now keep in mind that the last two two frames happened in a split second, which is why you can see that Raycroft hasn't moved very much at all. Rayzor should be in good position here for the rebound that he caused: the rebound was down to the right side of the net, so hugging the post was the right angle to take away in case Morrison shot the puck. Only he didn't, and because Ribeiro lost his man earlier in the play... 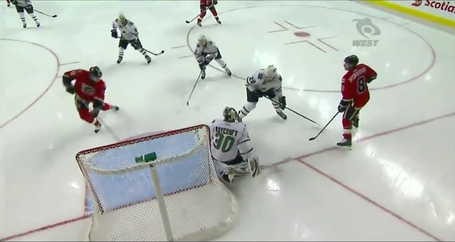 ...Tanguay is left unmolested in front of a gaping net. I'm not going to fault Rayzor too much for this one. 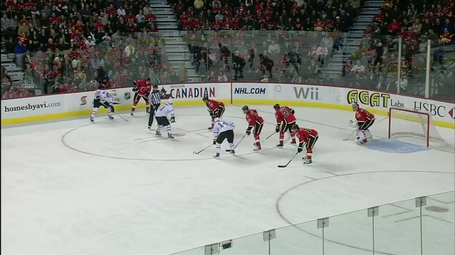 Here we have a faceoff in the Calgary zone. Olli Jokinen has been bumped from the faceoff, and has moved next to Jamie Benn while David Moss has taken over in the faceoff circle. 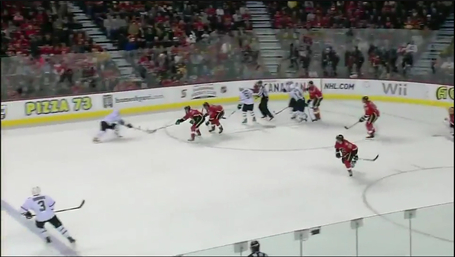 Richards wins the faceoff. Because of the scrum on the dot, notice that Benn has left his man (Jokinen) free up the ice. At the same time, Grossman, seeing all three Dallas forwards stuck up ice, has pinched a bit off the faceoff, and he and the suddenly free Jokinen reach both of their sticks out to gain possession of the puck. I can't fault this move by Grossman. Neal, Richards, and Benn are behind the play, and three Flames forwards are already progressing up ice. If Grossman doesn't pinch here, it's a guaranteed 3-on-2. As it is, Jokinen pushes the puck past Grossman... 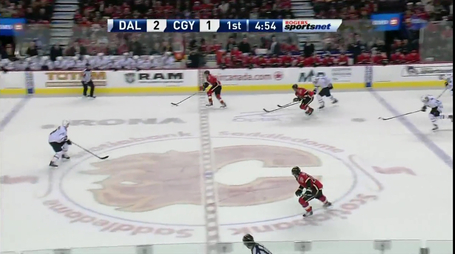 ...and a 3-on-1 develops. Though you can see that Grossman is chugging along well enough to keep Moss somewhat tied up if necessary. 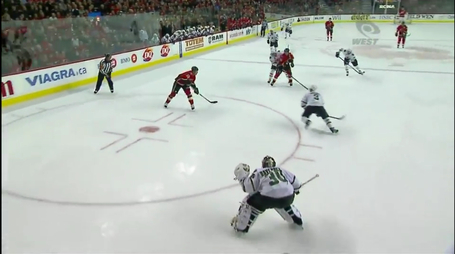 Here you can see Raycroft far out of his crease to challenge Jokinen. My limited goaltender technique knowledge tells me that he's in good form here: squared up to the shot, glove hand raised. You can't see him in the picture, but another Flame is off to Raycroft's right. However, Robidas has covered the pass here well by now, so there's nothing left for Jokinen to do but shoot... 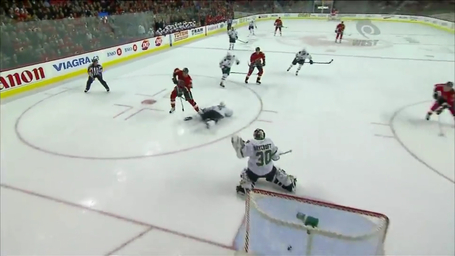 ...and he beats Raycroft under the glove. If you watch this in real time, it's apparent that Raycroft simply misses with his glove hand. I don't think he was expecting short side, which is why he was so far out of his crease. (If I'm wrong on this, then I'd appreciate if you goalies out there would correct me in the comments.) Credit to Jokinen for a great hustle play, but I think this is one Rayzor usually would've stopped.

This next goal, I think, would initially cause some finger-pointing towards Matt Niskanen after the first glance. But looking closer, he's not at fault for this play at all. 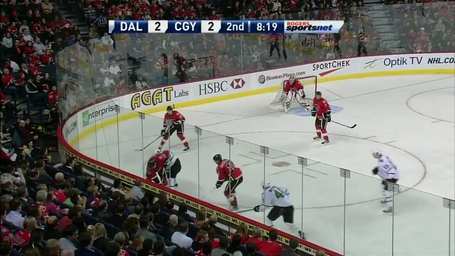 This sequence begins with a battle between Tom Wandell and Tim Jackman along the boards. Wandell loses said battle, and the puck slides over to the stick of Adam Pardy. 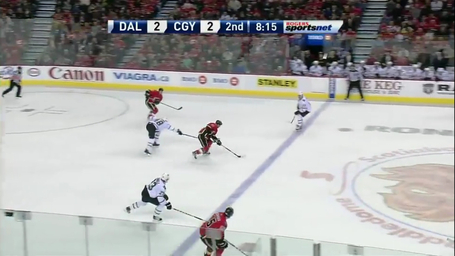 Here, Mikael Backlund receives a pass from Pardy and carries the puck up the ice. Notice Wandell skating between Backlund and Jackman as they move forward. 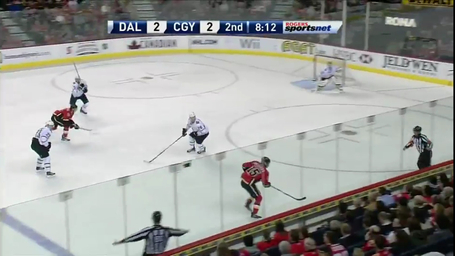 Now, it's hard to show through pictures, but up to this point Wandell has been skating markedly slower than the other two Flames up the ice. As the primary backchecker in this sequence, that's a big no-no. At this point, with Jackman in possession of the puck and Backlund starting to cut towards the net, Wandell is in no position to make a defensive play on a crossing pass. 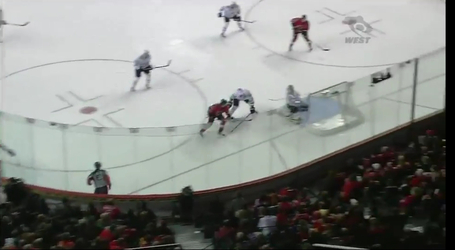 And because of that, Backlund is able to take the inside of Niskanen on his way to the net, and deflects the puck over the shoulder of a helpless Andrew Raycroft.

I never thought I'd ever take so much effort defending Matt Niskanen, but there you go. 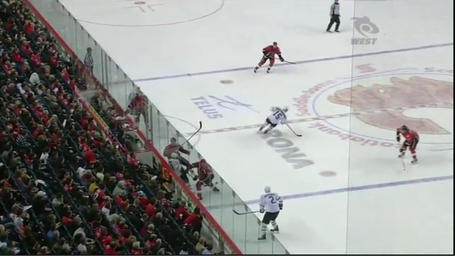 Another play sprung from a lost battle along the boards. I think we can say that was the Stars' biggest weakness last night, no? Here, Brenden Morrow is pushed violently off the puck by David Moss, who carries the puck into the attacking zone. 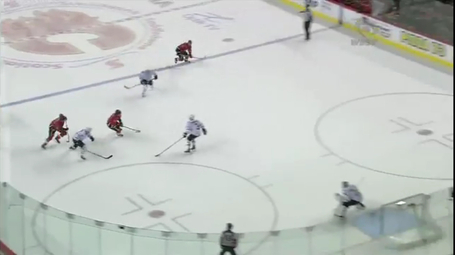 Nik Hagman receives the pass. Stephane Robidas is in a tough position here; he has to be ready to make a split-second decision to either block the shot or break up the pass. 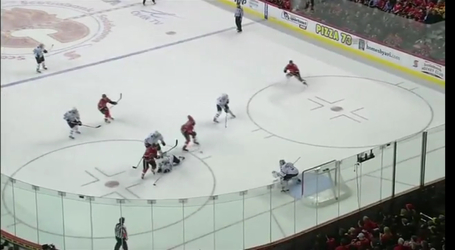 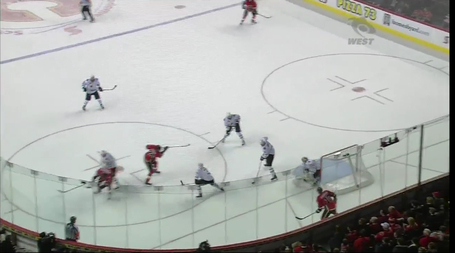 And he gets a shot off uncontested. Raycroft is in good position here. Pads low, angle covered.... 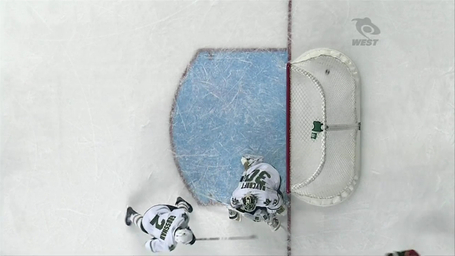 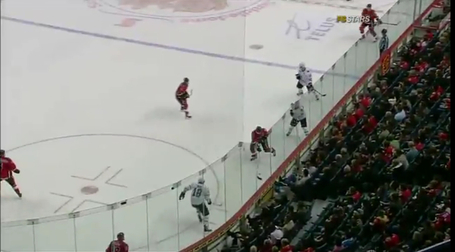 Hey look! Another lost boards battle. Only this one was pure domination by Jarome Iginla. You'll notice Alex Tanguay cherrypicking hovering near mid-ice, and Brendan Morrison just to Iginla's left. 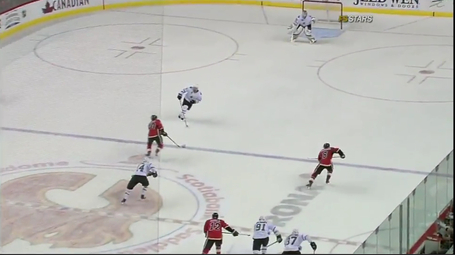 Iginla makes a nifty lob pass over Benn and a pinching Karlis Skrastins, and Tanguay catches it and carries it into the Stars' zone with Morrison against the lone warrior Robidas (who seemed to be in these unfortunate situations a lot last night). 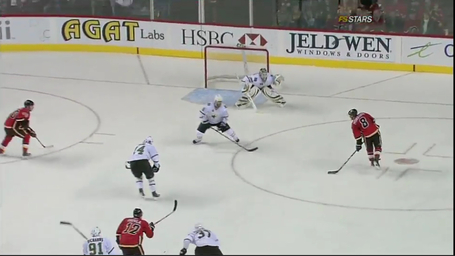 Here again, Robidas blocks the passing lane perfectly. Raycroft seems to have learned from his last mistake against Jokinen: here, he's deeper in his crease and has the shortside well covered. 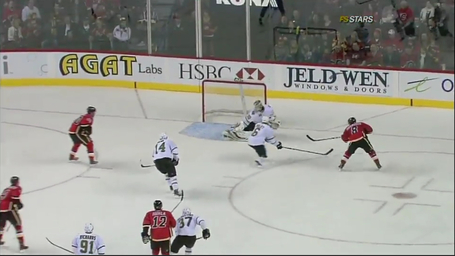 Unfortunately for him, Morrison makes a perfect shot to the far side of the net, and Raycroft is slow to react to it. Suddenly Dallas is down 5-2. They manage to make it 5-3 in the third period, until... 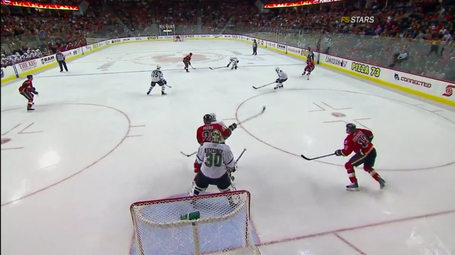 Dallas is on the penalty kill here. Already, you can tell this is not going to end well. Dallas has three forwards above the circles, leaving a 3-on-1 situation below for Raycroft to deal with. 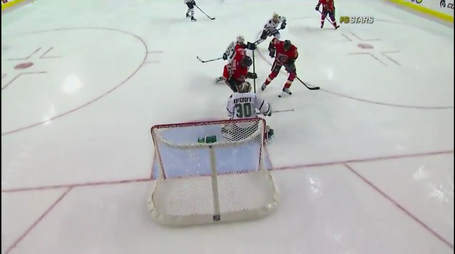 Mark Giordano wrists the puck in deep, and Jokinen's deflection is blocked by Andrew Raycroft. In this picture, you can see the puck right in front of Olli Jokinen's left skate. Not the greatest rebound.

Jokinen, realizing this as he falls down, manages to squeeze the puck around Raycroft's right pad. Again, Raycroft was slow to react here, leaving that small space open for the puck to pass through. 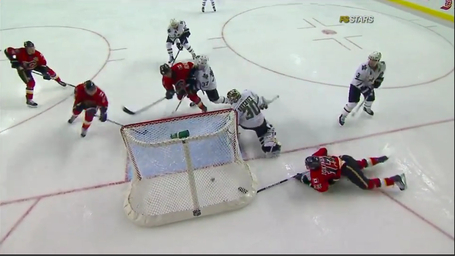 Calgary collapses on the net, and Moss ends up with the easy goal.

So what we can gather from this:

A few days off will be good for this team to go over the game tape and rest a bit. They're going to need to forget this game if they want to compete with the Canucks.