Who is the Face of the Dallas Stars?

Share All sharing options for: Who is the Face of the Dallas Stars?

As recently as last month you could walk by the Dallas Stars pro shop in Frisco at the stars corporate office and see several large posters looking back at you through glass. The most prominent among them contained one Mike Modano, and a Mr. Marty Turco, and if they haven't been taken down or replaced by now, they very soon will be.

Those posters are but a tiny microcosm of the issues facing the Dallas Stars PR machine next season, including the new owner, his new president, and most of all, the men and women working hard to sell tickets even as you read this post.

The Rangers have sold you a decade of Mike Young, and now Josh Hamilton. The Mavericks have the Big German. Quincy Carter did some drugs and then the Cowboys lucked into Tony Romo; And the Stars have sold Mike Modano. They've had him to sell from the nano-second they arrived in Texas. The American hero. The good looking guy your wife can ogle. The All-Star. The fastest guy on the ice. Not any more.

Who is the face of the Dallas Stars?

Who is the player that "John Q. Public" knows now? Who can the very casual fan keep an eye on when they're given a pair of free tickets to see the only game they'll come to next year?

My man crush on Brenden aside, I don't think he's the answer. The captain was perfectly positioned to make a run at the top of the public consciousness after his stellar playoff performance of 2008, but a torn ACL and a mediocre return have limited his effectiveness on and off the ice the last two seasons... 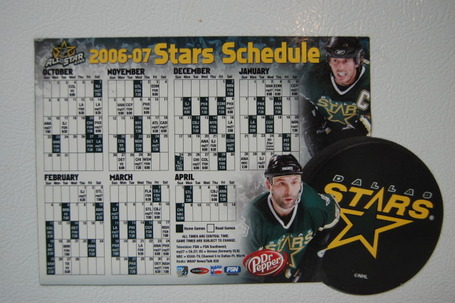 Even as recently as the "All-Star" year of 2006-2007 (where Stephane Robidas and Marty Turco were the only ones on the ice when the All-Star game actually hit AAC ice...), Modano and Zubov, both around 36 years of age, were focused on in the advertising campaign. And why not? Sell the people what they know, right?

Looking back at this one, it seems no one consulted the graphics department on who the captain was going to be heading into this season. The captaincy controversy always made this magnet a little awkward for me that season.

Still, Brenden Morrow wins this argument by default simply because the captain, who will turn 32 years old this year, is no spring chicken himself. Longevity and name recognition make him the likeliest choice, but show a picture of Mike Modano to people on the street versus one of Brenden Morrow and see whose name gets said the most. That comparison is as unfair as it is absurd, I know, but it's the position the Stars find themselves in.

What about Brad Richards?

Brad Richards had the 7th highest point total in the league last year. You can use a guy who was top ten in scoring right?

Look at the NBA. Who was 7th in scoring? By coincidence, it was Dirk, but take any other name off the list right around there you like...Brandon Roy...Amare Stoudemire, Joe Johnson...You can market that.

What about baseball? Harder to compare, but let's see who was 7th in batting percentage last season (minimum a reasonable number of AB's.)...It was Albert Pujols. You can market Albert Pujols, yes?

It just doesn't translate to hockey. It never has, and it never will, at least not in Dallas. The 7th best scorer in the game should be a marketing slam dunk, but a cerebral approach to the game and a bevy of secondary assists don't make SportsCenter highlights, do they?

We love Brad Richards. He makes this team immeasurably better when he's on the ice. I hope the new owner signs him up for the rest of his career. I might consider giving any offspring he may have an entry-level deal. That being said, he has all the personality of a wet mop. His interviews are boring. He's a nice guy, but his demeanor just doesn't pop, and his on ice performance, while efficient and productive, lacks the pizazz and flamboyance of Mike Modano's jersey flapping behind him, or Marty Turco rolling around on the ice making saves.

To a hockey fan, he's a genius. To your buddy "Joe Bob" at work, he's nobody.

James Neal. Jamie Benn. Loui Eriksson. Should they get consideration? Loui is as quiet and workman like as Jere and Brad are. The other two are burgeoning, but off the radar in the larger public consciousness. Again, to hockey fans they're worth watching and you want them on your fantasy team, but to everyone else they're guys who weren't here in 1999. That's unfair, but a lot of people see it that way.

What about Steve Ott? Face of the franchise? No. A larger player in the marketing game going forward? I wouldn't be surprised, and I support it. Otter is everything people who don't know hockey love about hockey, and he threw in 20+ goals to go with it last year. No one gets the AAC on their feet like Steve Ott. He definitely gets an honorable mention here with a nod toward the future. 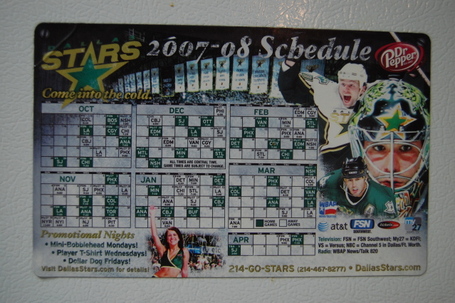 The secret to the Stars success in 2007-2008: Putting an ice girl on the schedule magnet?

That was the best promotional season they ever had. The $3 dollar t-shirts were the best thing. Ever. Dollar hot dog night was a hit too. Note to new owner: Bring these things back. The mini-bobbleheads...meh.

That season is a perfect segue, actually, because after the long playoff run, selling tickets was easy. There's only one other thing that's helped the Stars market themselves since coming to Dallas more than Mike Modano...

The likelihood that another dynamic, charismatic, all-star caliber player will roll through DFW any time soon on skates is low. There will never be another Mike Modano, obviously, and the odds of our very own Ovechkin like presence are astronomical to say the least, so how does the team claw it's way back into the public consciousness?

Winning. Division titles? Yes, the banners are nice, but people respond almost universally to winning in the playoffs. Even the most staunchly "apathetic toward hockey" guys I know begrudgingly admit that playoff hockey is intense greatness. Dallas is unlikely to see it's stock rise because of an individual, but success as a team can bring them back.

How do they do that? Well, we talk about/ try to figure that out every day, don't we? 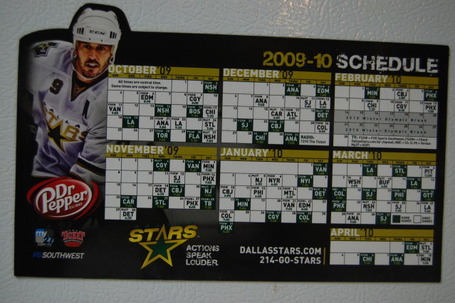 In a fit of clairvoyant, prognosticative, fore-shadowing the PR department left Modano, sans even Brenden, alone on the magnet last year.

"Your marketing message for the year has to flow up from an authentic place; it flows up from the team because you are trying to encapsulate the best of your team. This year it is: ‘It’s About TEAM’ and team will be in all capital letters," Geoff Moore, executive vice president for sales and marketing. "It’s because the Dallas Stars were not built by one player. Certain players had more to do with it than others, but it was always about a team. "

It's not sexy, but it's the truth. He says it must flow from "an authentic place." I like that. The team's odds appear long once again next year. They have made little or no significant improvements. If they're going to accomplish anything, a total team effort will be absolutely essential.

How does that translate to a refrigerator magnet? I don't know.

The truth is, the real face of this franchise needs to be it's new owner. At least for a time.

A lot of folks in this town express their disapproval about Jerry and Cuban. They express it daily. They point to teams like the Spurs and they say "Do you know who the Spurs owner is? ... Of course you don't! And that's the way it should be!"

Perhaps, but it's not always the case. The hope of this fan base, my hope, is in the pending new ownership right now. We all want that knight in shining armor to come in here with cash just kind of falling out of his pockets when he walks, and we want him to tell us it's going to alright. We want him to take official ownership of the team and on the same day announce parking prices, concession prices and merchandise prices are all dropping, the way Chuck Greenberg did for the Rangers last week.

We want him to say "We're going to re-sign the wet mop Brad Richards" the way Chuck Greenberg said it about Cliff Lee. The Jerry Jones level of "face of the franchise" is a bit much, but some camera time for our new owner might be just what the doctor ordered for Stars fans, provided he's saying what we want to hear, of course.

Mike Modano will come back and probably put his face out there for all to see again, but in the mean time, let's just do some winning and let the marketing take care of itself, OK Stars?

P.S. If your fridge doesn't look like mine, you're not Stars fanning hard enough.