The other day I was alerted to a curious new photo campaign started by Liverpool FC supporters at Spirit of Shankly. (For those who don't know, and I didn't, Shankly is the name of a very famous manager of Liverpool FC, Bill Shankly.) I saw it here at the Dallas Observer first.

Paul Gardner at Spirit of Shankly, who has an awesome last name, is encouraging Liverpool supporters around the world to print off this PDF poster, found here, and to take their picture with it. Their Flickr stream of these photos already includes an impressive array of famous landmarks and countries spanning the globe. Two intrepid gentleman even went to the Stars office in Frisco (above) and to the American Airlines Center on behalf of Dallas Stars fans also fed up with Tom Hicks.

The Spirit of Shankly Union, as they call themselves, even conducted a rally on July 4th to protest owners Tom Hicks and George Gillett.[BBC News]

Leaders of Spirit Of Shankly Liverpool Supporters' Union issued their own Declaration of Independence, outlining details of how supporters can buy the club through a partnership with a credit union.

The club is about £350m in debt and Spirit of Shankly has accused Mr Hicks and Mr Gillett of breaking promises and "a lack of understanding about running a football club".

That is impressive. How bad will things have to get before Rangers and Stars fans get that kind of organization?

Please give their site a visit here, at http://www.spiritofshankly.com/ 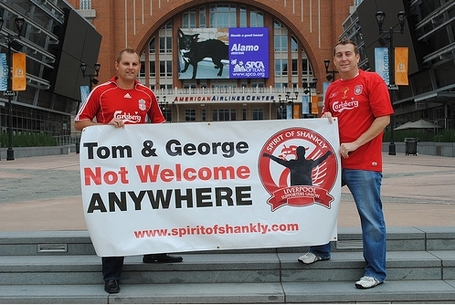 Thanks to Mr. Paul Gardner for allowing us to use these photos.

After the jump, my daughter gets in on the action...

She looks really serious about this too... 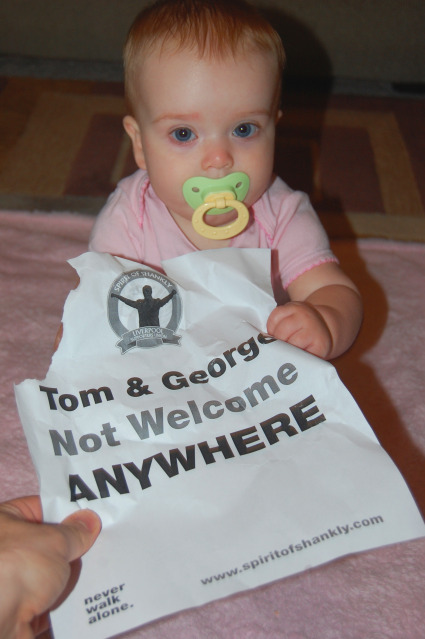