Defending Big D continues our annual series of looking at top draft prospects that could possibly have their name called by the Dallas Stars at the 2010 Entry Draft.  Today we take a glance at right winger Emerson Etem, a left-handed speedster that showed off his knack for scoring big goals for the Medicine Hat Tigers of the WHL this year. 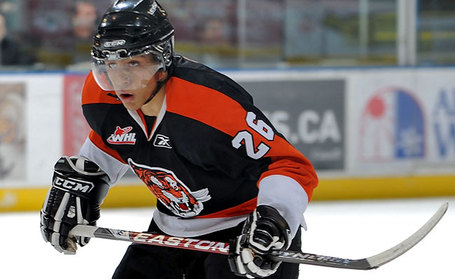 
Why the Stars would want him:

Under Marc Crawford's system, the Stars could always use a forward with great speed and puckhandling ability. Etem has all the traits you'd like to see in a forward: speed, a good wrist shot, and the ability to weave in and out of a play almost at will. Also has shown flashes as a great two-way forward in the WHL, and is an aggressive forechecker for a player of his stature. Etem has also demonstrated a great work ethic. Upon arriving at Medicine Hat for the first time, Etem walked into his coach's office and asked for as much game tape as possible so that he could study up on his new team. That's mighty impressive for a 18 year old kid.

First off, they may not have a choice on picking him. Etem goes anywhere from 7th to 16th on expert's mocks, so there is a chance Etem could be long gone before the Stars pick at 11th. But if he's still around, the Stars still might look elsewhere. Scouts doubt his hockey IQ away from the puck and worry about his tendency to 'crouch' when he skates with the puck. He doesn't often tend to create chances for himself, rather waiting for the puck to come to him on a breakaway chance. When he does create his own chances, it's off an aggressive forecheck.

"A 37-goal scorer with a good Medicine Hat team. He handles the puck so well at full speed. His crouch style belies his 6-foot stature. He looks smaller out there on the ice, but he's not small in productiveness. How about this -- he moved from Long Beach to Minnesota's Shattuck-St. Mary's to Medicine Hat, Alberta, all in the space of three developmental junior years."

"Etem displays an impressive skillset, but what might be most impressive is his ability to fade away from the play and seem almost invisible – only to appear and strike when you least expect him to. He has an NHL caliber wrist shot that almost always hits its mark, as characterized by his high goal total. Etem is also a great skater, with quick acceleration and blazing high end speed, and works tirelessly on both sides of the puck. These traits earned him an invite to the CHL Top Prospect’s game, where he put his skills on display, scoring a slick shorthanded goal. Etem showcased his two-way capabilities all season long in the WHL, as only four players scored more than Etem’s 5 shorthanded markers this season."

Elite straight line speed makes him effective as forechecker in puck pursuit and results in lots of clean breakaways, but lacks lateral quickness...Doesn't stickhandle well enough to create for himself...Other than goal scoring instincts, we have nagging doubts about his hockey sense. Does not anticipate well or do much away from the puck. Bit of a hot dog, but has a good work ethic and also contributes on the PK.

On his style of play - Emerson Etem, NHL.com prospect profile

Yeah, I think I'm definitely a speed guy. I like to utilize my speed in all situations. I think I'm a great transition player. Through the neutral zone, I try to look for options, whether it's to go wide or drive hard at the net. I like also to just be around the net and bear down on chances that my linemates create. That's where I'm best is trying to put the puck in the back of the net and find places where I can do that.

If I can choose one guy to model my game after, it would definitely be Marian Gaborik.

And finally some Etem highlights: (via O2Kmanagement)