An Unforgettable Evening With Mike Modano

Share All sharing options for: An Unforgettable Evening With Mike Modano

I wasn't expecting that. 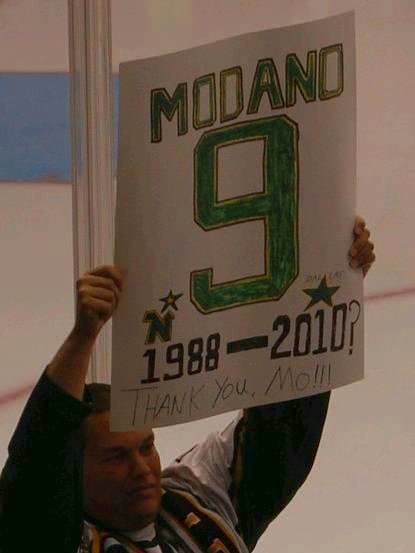 I really mean it.

I wasn't expecting that. I was expecting it to be emotional, definitely. I was expecting it to be hard for a lot of people there. I expected the ceremony at the end to be touching. I did not expect it to go on all night like that. In an age where we're so cynical and so skeptical about everything, I asked myself how far the Stars would go about recognizing three men with whom they had not officially parted ways. Marty Turco is the surest thing of the bunch, and even there they can't come out and say "Yeah, he's gone." And neither Mike nor Jere have made announcements. (If last night was any indication, they shouldn't, either.)

I did not expect that. Not that much. Hats off to the Dallas Stars, because they delivered in a very, very big way. I don't think it's a stretch to say, as a fan in the building, that we did our part too. We did it very well.

The rest was out of our hands. Take Teemu Selanne night in Anaheim last week, for example. An aging player is honored in a pre-game ceremony for goal scoring, and he can't score a goal that night. It's hard to make those things line up. It's not his fault. They rarely do.

So last night the Stars set upon the monumental task of honoring THREE men. Three pillars of the franchise whose names are plastered over every record in it's book. (Imagine if Zubov were there.) It was an impossible task, and to have just one of them shine bright would have been a victory.

For all three to have larger than life moments under such a circumstance is something I will cherish all my sports-life... 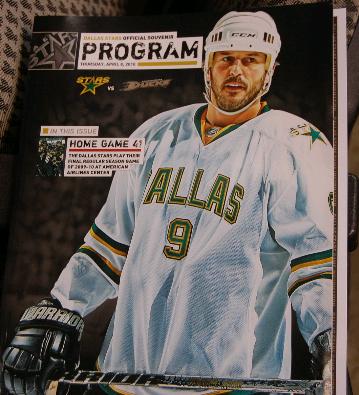 When Benn scored the first goal, and Bill Oellermann's booming voice called Jere Lehtinen and Mike Modano's names on the assists (drawing them out, for maximum effect) I greedily soaked the moment in as much as I could. I thought "this is it, this is their nice moment they get to share together," and I was content with it. In a low scoring game with Jonas Hiller determined to play spoiler, it seemed like all they would get. To assist on a goal together in that spot was as good as we could ask for, I told myself.

Little did I know.

In the mean time, every stoppage in play was punctuated with a graphic honoring one of the three. Every commercial break had a video. Marty Turco saves were celebrated. Mike's mullet-ed drafting in 1988. The Stanley Cup run. Mike's game winner against St. Louis in 1999. His assists on all those goal against Buffalo. Pictures of Jere Lehtinen so young you'd hardly recognize him scrolled the HD board in the pre-game countdown. Every opportunity was taken by the Stars to honor them, and every pair of hands was clapping every chance that they got.

The crowd hungered for Modano, as they often do, but it was more than the ordinary Mike fixation. It's a very common 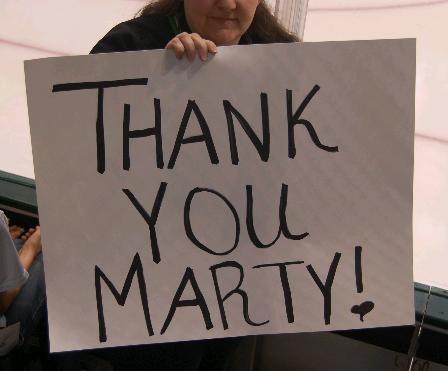 occurrence for the "newbies" to show up and start asking each other questions about Modano (even when he's injured). Particularly the little ones. They ask their fathers "where's Mike Modano?" And when Mike grabs a loose puck on the tail end of a long shift and takes two quick strides to center, the crowd collectively inhales and cheers, unaware that he's just trying to get the puck deep for a change. There was a lot of that last night, and it bordered on impatience at times. ("He better f*#$ing score tonight," someone in my section opined, and he was serious too)

Those of us that contented ourselves with just watching how great the man is with his compete level turned all the way up, as it was last night, knew that the score of the game didn't matter, and that a Modano goal was an unlikely proposition. He hadn't scored at home since February 2nd.

If we wanted a special Mike Modano moment, we'd have to make it ourselves. So after a little 5 second clip of Modano saying thanks, and with time running out, made it we did:

It's not Razors fault his producer made him talk over most of it. If anything it shows the spontaneity of the thing; And that there was still time time after the highlight's for the cameras to catch the end of it shows just how long it went on. 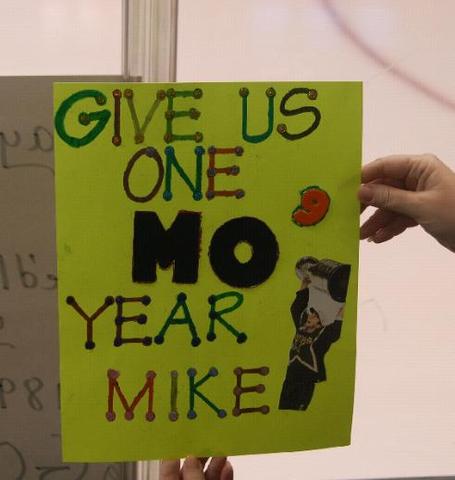 Mike put up a good fight, but he never had a chance. This clip now enters Stars lore forever, like Brandon said last night, with the Hull goal, and the Nieuwendyk OT winner, and the Brenden Morrow/Sharks video.

Then, oh yeah, there was a penalty to kill. It hardly seemed important. Bobby Ryan struck. I thought of the articles people would write. "The young #9 shows the old one the door." etc. It was bitter. Bitter for Marty Turco, and bitter for Mike just seconds after that wonderful moment. But it was all part of the script.

And then that goal that seemed so unlikely; The one that I mentioned earlier? He scored it. He found a way. He responded in kind to the crowd that had just knocked him on his emotional rear end. He found a way, because that's what the great ones do.

I don't know if that was a good goal he scored. It certainly was close, which was good enough. Not even Randy Carlyle would have taken that one away. Whether Toronto really did take their time with it, or just feigned a proper review, I hope I never find out. It was a fantastic moment that came on the heels of the assist and then the ovation: An unbelievable, unlikely pinnacle of the evening. So I thought.

I stayed seated when he had that breakaway in overtime. I really did. My first thought was "oh, we're just getting greedy now!" It was the end of a shift and he was as physically drained as he was emotionally.

He needed a little help from his friends. 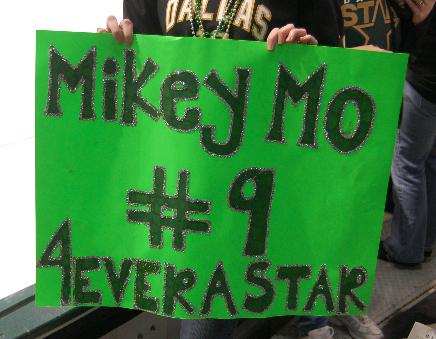 Which was where the true genius of the night came. The shootout. The stupid shootout. The much maligned, trivial skills competition that decides entirely too much, was finally used for some good last night, because it was tailor made on this occasion for the impossible task of honoring all three men. We said last night "it was like something from a movie," cliche though it may be. It really was. Marty Turco shut the door, Mike Modano put them ahead, and Jere Lehtinen closed the deal. One, two, three. ALL three.

They didn't need to ceremoniously award them the "three stars" of the game outside the confines of what happened on-ice. As good as Jonas Hiller was, they were the three Stars of the game. And we can't thank them enough, as hard as we tried last night. Mike most of all.

It sure looks as though Mike Modano is still capable of playing a little hockey, but if that was it; If that was the last goodbye we're able to give him, I think both sides can look at that one and say "job well done."

Only one man could have brought hockey to Texas. He was the perfect man for that job, and last night was a perfect end.

(Unless, Mike, you want to come back?) 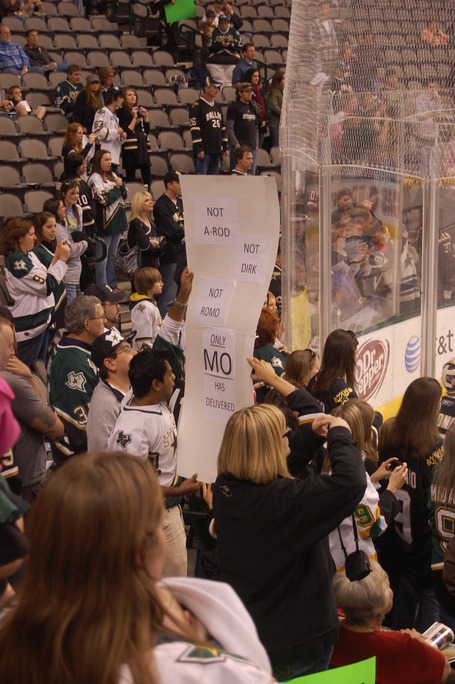 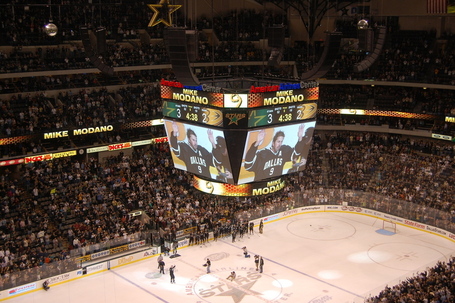