While Mike Modano's 20 year storied NHL career gets all the headlines in the media, Marty Turco's last game in a Dallas Stars uniform is going largely unmentioned by Stars fans and national media alike. This blog has been guilty of it too.

There's no quesiton in anyone's mind which is more deserving of the attention, but that's not to say that Marty Turco isn't deserving of any attention. His name has been connected to the franchise for 16 years, since he was taken in the 1994 entry draft. He's worn a Dallas Stars uniform for nearly 10 years, since the 2000-2001 season, and he's been the teams starting netminder for 7 seasons, starting in 2002.

Marty Turco has been confirmed as the starter for tomorrow night's home finale, and barring any miraculous or strange occurrences in the next 4 months, it will be his last in a Dallas Stars uniform. It's going to be hard for we who have known him best to sandwich potential goodbye's to Mike Modano and Marty Turco (and to a lesser extent, Jere Lehtinen) into one 60 minute hockey game, but that's the hand that's been dealt.

Now that it is indeed over, it's time to shelve the poisonous "Marty Sucks" mantras and take a second to reflect on what he's meant to the fans and franchise here in Dallas...

Marty Turco is a gunslinger.

That's a term that is often applied to NFL quarterbacks like Brett Favre, who, to put it mildly, like to take chances. This applies to nearly every aspect of the mans game, not just the puck handling. He's been described over the years as a bit of a gambler (some night's more than a little bit) and until the last two down seasons, it worked for him extremely well. There was a time when he controlled his chaos just enough that it made him genius. It was a controlled chaos he showed off this year just before the Olympic break.

His legacy will be one of controversy, and to some, disappointment.

Without being given a chance to turn his numbers around, the debate surrounding Marty Turco's time here will likely never be given a satisfactory conclusion. He played in Dave Tippett's system, which was largely the same as Ken Hitchcock's system. He played with Zubov, Hatcher and Matvichuk for a time. He spent most of his good years with Philippe Boucher. He made his run in 2008 with Mattius Norstrum, Sergei Zubov and Boucher.

Like Brodeur in NJ, for most of his time in Dallas, Turco played behind a group of men, and a system, that protected him the way any good defense should. For two seasons now that has been absent. Without a return to a, forgive me, competent d-core here in Dallas, the question of whether or not Turco could have returned to being the player he once was will have to be answered in a different city.

His legacy in Dallas, up to this point, has been linked by the media and fans alike to Brenden Morrow. The two rose to leadership positions on this team together, blossoming together, and their friendship is no secret.

Watching the two battle in the playoffs in 2007, and seeing that classic picture of them as game 7 in Vancouver ended, you couldn't help but root for the two of them. I wanted them to succeed as a team. 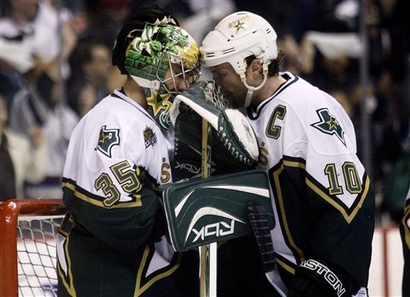 Then in 2008 the two battled even harder, but Detroit was too much to overcome. As Marty departs, I choose to look at these not as failures, but fond memories.

His legacy in Dallas will be inextricably tied to Brenden Morrow and Dave Tippett, for at least the near future, and the conversation will always drift toward whether or not any one of them is capable of winning a Cup. Marty is young enough (34) that he has time to redefine that legacy elsewhere. At 261 wins, even 4 or 5 more mediocre seasons would be enough to vault him into the top 25 or top 15 all time. And given the right circumstances with a strong team, he is still capable of performing well in the playoffs.

I am already seeing people around the internet saying "He couldn't win a cup. He sucks. Good riddance." If that's your line of demarcation then that makes pretty much every goalie to ever play the game a loser.

Do not remember Marty Turco as a failure in Dallas. The Stars succeed and fail as a team.