Tippett's Coyotes Bring Memories of Springs Past to Dallas

Share All sharing options for: Tippett's Coyotes Bring Memories of Springs Past to Dallas

Like the bitter ex-girlfriend, Phoenix, we still think we know our man better than you do. He's trying the same old tricks and whispering all the same sweet nothings in your ear that he did in ours. And like the battered lover that we are, knowing how things ended with Tipp time after time, we find ourselves inexplicably wanting him back. Maybe the devil we know really is better than the devil we don't.

And Marc Crawford, buddy, we still don't know you very well at all do we?

This is not  a "Did the Stars make a mistake by letting Tippett go?" discussion. That's not something anyone can truthfully judge after 72 games, and frankly it's not even the right question to ask. The general manager decision is at the heart of that particular matter. But I digress...

The Phoenix Coyotes now share a piece of the Western Conference's top spot. I think a lot of people in hockey will tell you that anything they do in the playoffs on top of this incredible season (and subsequent Dave Tippett Jack Adam's award) is gravy. "They're playing with house money", etc. (And I hope the irony of that particular cliche isn't lost on anyone). Maybe so, but if they're seeded that high, they should be expected to go deep in the playoffs, right?

I just find myself wondering, hasn't Dave Tippett tried all of this before?

No Shootouts in the Playoffs

When I heard that Phoenix's 9 game win streak includes 5 shootout wins, I couldn't help but think "Classic Tipp!" One need only think back to the 2005-2006 campaign that saw the Stars win 12 shootout games on their way to claiming the #2 seed and a home-ice first round matchup with the Colorado Avalanche. Three overtime games, three overtime losses.

Flash forward to 2006-2007. 9-4 in the shootout, and a first round series with the Vancouver Canucks. Two more soul crushing overtime losses saw the Stars eventually lose a series where their goaltender recorded 3 shutouts. Relying on your goaltender, not winning games in regulation? Is any of this sounding familiar?

When Brad Richards arrived in Dallas in time for the 2008 Stanley Cup Playoffs, he started preaching the good word of the Tampa Bay Lightning (nearly never a good thing) that "Safe is death." Looking back on it now, how you're going to approach the game with a third period lead seems like a real nice problem to have. We miss having that problem, and Dave Tippett teams seem to find themselves in that conundrum more often than not, but it's still an issue with him. Some say "Safe is death" but Tipp says "Safe is safe."

Yesterday the Yotes got a 2-0 lead and then proceeded to do this: 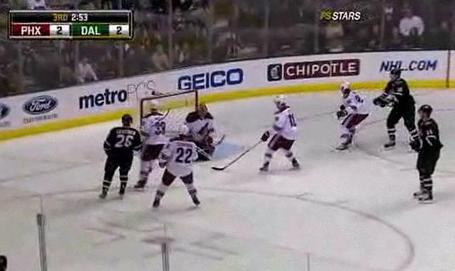 Which is to say, get a lead and then dog pile everyone in front of the net and wait for the clock to run out. (Sorry Phoenix, that's what it looks like to everyone else). As you can see above, it didn't work out. The Stars managed to tie the game, but that's a rarity for this Coyote team.

Score first and play defense has worked extremely well for them this year. They're a league leading 34-3-2 when scoring first. Tippett's Stars were 32-7-2 when scoring first in 2006-2007, in case you were wondering. His teams are patient, they're careful, and they wait for their opportunities. Can they afford to wait in the playoffs? What do they do when they absolutely have to manufacture a goal right now? Classic Dallas questions to ask this time of year.  Classic Dave Tippett.

This is not all to say that Stars fans doubt the Coyotes or wish them any ill will. Personally, I will be pulling for the Coyotes when the playoffs begin a month from now, and Dave Tippett is a huge reason why. This kind of hockey absolutely can work. Ken Hitchcock showed us that here in Texas. For Dave Tippett, it nearly worked in 2008. Defense wins championships, as they say, but an offense ranked 21st in the league rarely does.

For all the similarities, there are plenty of differences. That big Russian in net is the biggest one. If there's a better goaltender in the Western Conference this year, I haven't seen him.

This nine game win streak is certainly something that Dallas has never done with Dave or with anyone else. The furthest Tippett took the Stars (in 2008) was immediately preceded by one of the most abysmal Marches the club has ever had.

With the Sharks upholding their yearly Spring tradition, and the Blackhawks', err, "dynamic" in goal, the situation is ripe for the Yotes to strike. Bad for tv ratings, but just what The Valley of The Sun needs to bolster their hockey community, it is truly strange to think that the road to the Cup this year might go through Phoenix, Arizona.

So have fun, Phoenix-fans. Just watch out for those Tippett-isms. We feel like we've seen this all before, but hopefully we're wrong.