Share All sharing options for: The "Lone-Star Faceoff" Begins Tonight on FSN

We know not all Defending Big D readers live within the comfy confines of Texas, but bring you this public service announcement we must (because it's something I'm excited about): The Texas Stars will be on television in the Dallas-Forth Worth area tonight on FSN at 7:30pm CST. 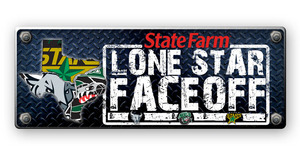 Says the release from the Texas Stars:

"The Lone Star Face-off is just one of the ways Texas-based State Farm agents in Houston, Austin and San Antonio can support Texas hockey fans", said Ronnie Vandiver, Texas Zone Marketing Manager for State Farm. "We can't think of a better way, than to have a round-robin playoff system determine which team is the best in Texas. Texans love good competition and State Farm is always eager to be a part of it."

As a part of their regular AHL schedule, Texas teams will be meeting up many times over the stretch run toward the playoffs, and FSN has said they will broadcast certain games in certain markets. The first of which, for the Stars, is tonight as they take on the Houston Aeros.

FSN will televise the State Farm Lone Star Faceoff live in the greater Austin area, Dallas, Houston and San Antonio on a combination of FOX Sports Southwest, FOX Sports Houston and FOX Sports Plus. The home team is responsible for providing the play-by-play talent, while FSN analyst and former NHL defenseman, Brent Severyn will broadcast all six games. Joe O’Donnell, the voice of the Aeros, will broadcast two games with Severyn in Houston. Stars broadcaster, Josh Fisher, will broadcast both games at Cedar Park Center with Severyn. The Rampage will supply the play-by-play talent to partner with Severyn for their home broadcast.

FSN will broadcast these games in some form or fashion in San Antonio, Houston, Dallas, or a combination of any of the above...

According to my own Verizon FiOS schedule, the Sunday game tomorrow will not be available in DFW (if you know otherwise on a different provider, please let us know). We'll wait to hear about the Saturday, April 3rd contest.

This is a fantastic, rare opportunity to get a look at Stars prospects from afar. Perttu Lindgren, Sergei Korostin, and Mathieu Beaudoin are a few of the leading scorers for the Texas Stars that will be on display. Don't miss it.