Share All sharing options for: Hockeymetrics: The Stars' ESGA/60 Keeps Going Down

Disclaimer: Statistical-based analysis is contained in this post. If you're anti-stats, you might want to skip this post. And as always, all stats are courtesy of our good friends over at Behind The Net Hockey.

Since we visited this topic, the Stars have ripped off five consecutive wins. Mind you, not all of these wins have been pretty by any stretch of the imagination. 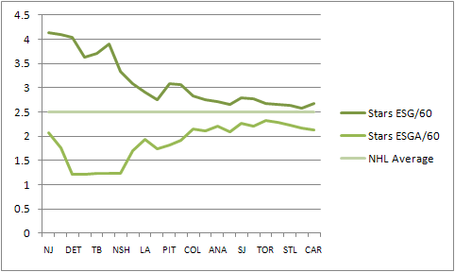 Back on November 22nd, the Stars started off a brief two game road trip to the Canadian province of Ontario with a brutal 4-1 loss to the Toronto Maple Leafs. In that game, they surrendered four even strength goals.

You'll recall during the last update on this topic, I wrote that the team could survive their poor power play hockeymetrics stats so long as they outplay their opposition at even strength.

Well ever since that night at the Air Canada Centre, the Stars have done just that.

But not in the way we'd normally expect them to, which is to simply use their high end forwards to outscore the other team. No, these Stars have shown a different element.

Granted, the goaltending's contributing more to this than any other aspect. Saturday night, Kari Lehtonen held down the fort only allowing a B.J. Crombeen second period goal before Jamie Benn and Loui Eriksson rode to the rescue.

Last night. it was Andrew Raycroft who turned aside 14 first period shots from the Eastern Conference leading Washington Capitals and a number of second period shots before Mike Ribeiro drew first blood on a power play goal 13:29 into the middle frame.

And it helped that a potential game tying even strength goal in the waning seconds of regulation got waved off, but Brad's already touched on that topic.

Aside from those games, the Stars have turned in some complete defensive efforts though, starting with the game against Ottawa that kicked off this winning streak and Monday night's contest against Carolina.

When I predicted at the beginning of the season that the Stars would miss the playoffs, I thought their defense would be a big reason why. And while this team will never be confused with the late 90's teams that used a suffocating defense as it's calling card under Ken Hitchcock, it is very encouraging to look at this graph and see the ESGA/60 trending downward.

And in case you're wondering about the special teams... 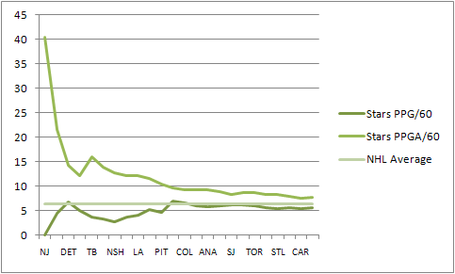 Not much to add, here.